EXPECTATIONS: The subgenre of action films in which Jason Statham rescues those less badass than himself has become fairly bland recently, and it appears to now be recycling itself. Safe looks like it promises to take the plot of The Transporter, inject it with the emotional hook of Transporter 2, and leave out all of the things that completely ruined Transporter 3. If it can deliver on that promise, then that sounds like a perfectly fine evening at the movies.

REALITY: If you'll allow me to dip into the Big Bag of Film Critic Cliches, the biggest problem with Safe is that it's precisely that: safe. It's an action film that knows full well how staid its own premise is, and seems perfectly content to go through the motions, hoping that it if just moves around fast enough, you won't notice how utterly mindless the whole exercise is. In our forums, telling people to turn off their brains is met with the gnashing of teeth, but you may want to consider it while watching Safe, because there is absolutely nothing here to warrant 90 minutes of your undivided attention.

Mei (Catherine Chan) is a young Chinese math genius who hates numbers; Luke Wright (Jason Statham) is an ex-cop prizefighter on the run from the Russian mafia. Together, they fight crime. No, really. Mei is sold to the Chinese mafia in Manhattan to memorize codes and financial figures. They use her to memorize and ferry a very valuable number to the Russian boss (Sandor Tecsy) across town. After fleeing a standoff between the Russians and the police, Mei is picked up by Luke, who protects her from the very Russian gangsters that are out to get him. With two whole mafias on his tail, Luke turns to the only people he can trust: the corrupt detectives he ratted out during his days on the police force. 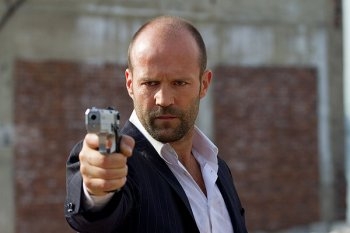 I'll be honest with you; I don't feel all that safe right now, Jason.Right away, Safe shows that it has the potential for unique character development. In the first ten minutes, we find out that not only is Luke a former NYPD cop, but also his guilt over ratting out his coworkers led him to a life of prizefighting, where he atones for his sins by letting opponents pummel him. That's already one hell of a rugged character, but when the Russian mob kills his wife and forces him to live on the streets, it seems like writer/director Boaz Yakin is trying to take this man as low as a man can possibly get in order to redeem him by rescuing Mei. It's a more complex setup for a character than we're used to seeing out of a Statham vehicle, which makes it all the more insulting when the film then has him revert back to stone-faced Transporter mode once the action ramps up.

Granted, the film's first big action sequence is well-executed. It's oddly satisfying watching a man in sweatpants and busted sneakers methodically tear apart five gangsters dressed to the nines on a subway train. Director Yakin has a decent eye for hand-to-hand combat, but he's particularly lacking in the area of gunplay. Save for some well-choreographed fisticuffs, much of the action in Safe consists of haphazard shootouts and car chases that lack the sort of chaotic energy that Jason Statham usually brings to this sort of film. There is one great moment that involves Luke taking a flying leap into a crowded bar and opening fire on a table of Russian gangsters. For one brief, glorious moment, it seems like this film might finally come alive and deliver the kind of go-for-broke violence that it appears to be building toward. Instead, the scene ends about as quickly as it began, and suddenly we're watching Jason Statham devour a hoagie in front of a bunch of cops.

I have to admit, I'm a bit baffled at the way Yakin uses Statham in this film. They establish a deeply tragic backstory for his character, watch him hit rock bottom and then offer him a chance at redemption, only to have him shoot up nightclubs and then make wisecracks in front of the very detectives who have every reason to kill him then and there. His young co-star, despite getting a lengthy backstory herself, practically disappears halfway through the film, amounting to little more than a frightened face in a dark corner of the screen. For two characters initially so well-developed, it's a shame that their adversaries turn out to be Lo-Pan in a business suit and Russia's version of Charles Durning. 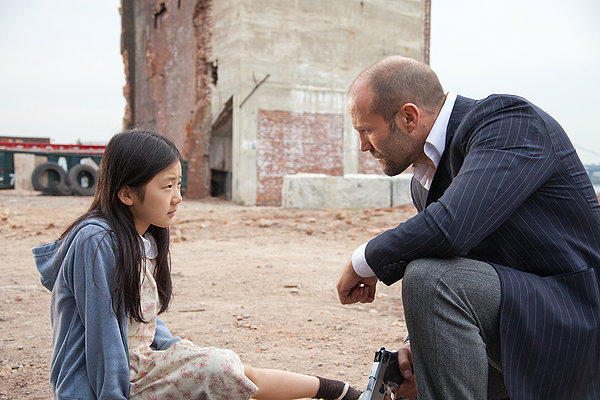 Seriously, just put the gun away for two minutes, please!

Perhaps my problem is that I simply prefer the films in which Jason Statham turns into a video game character and beats people with fire hoses, but there's no reason why he can't play to the more serious side of the action spectrum. Where films like Killer Elite and The Mechanic at least developed the secondary characters and built a dynamic rapport between Statham and the people he killed, Safe paints every corrupt corner of the city in agreeable stereotypes to prevent us from becoming too attached to any of them. I'm not saying I necessarily want to get to know James Hong's Chinese mob boss, but it would at least make his comeuppance a little more entertaining.

Rather than the Transporter-lite film I was hoping for, Safe instead becomes the kind of dreck high-culture types might make fun of at cocktail parties. When professors in tweed jackets deride Crank for being a mindless exercise in criminal behavior, this is the film they're actually describing. Safe lacks even a modicum of intelligence beyond the ability to pull off a decent fistfight. The heist isn't important, the characters aren't important, and there's absolutely nothing underneath to suggest that Safe is anything but an excuse to shoot some people on camera.

MINORITY REPORT: I always say that the proof of an action film is in how well it will play in a teenager's bedroom 20 years from now as he watches it semi-ironically with his mates and a three-litre bottle of cheap cider between them. Sound like Safe is going to be at the bottom of their viewing lists. - Ian "Professor Clumsy" Maddison