EXPECTATIONS: So, here's what I know about this movie: Jason Segel is in it. So is Emily Blunt. Apparently they're engaged or something. Also, Nicolas Stoller directed it. So, since I don't know what to expect, I'll just relate a conversation Ian and I had this week where he said he didn't believe Jason Segel was quite right for all of these romantic leads he's been playing, but would have been perfect as a horror actor. I can't honestly say I disagree here. I think Segel's sheer size and his willingness to go completely over-the-top with a persona would make him perfect if someone wanted to create a new movie monster for a franchise. Of course, he can't do it now, because all we would see is Jason Segel. Unless he were in a role that required him to wear a lot of makeup and costume as camouflage. This is why I'm officially starting the Current Releases MAKE JASON SEGEL SWAMP THING petition. 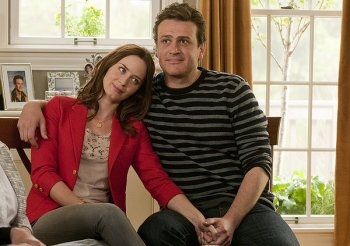 Hoo boy, you guys sure look happy.The couple engaged for the amount of years promised us in the title are Tom Solomon (Segel) and Violet Barnes (Blunt). We spend the first half hour of the film being cute and quirky with them, watching their cute quirky love story and their cute quirky engagement and meet their cute and quirky friend and oh god everything is just so cute and quirky it's like Zooey Deschanel exploded all over my theater. When Violet is offered a job at the psyche department of the University of Michigan, Tom leaves his chef job behind in San Francisco and moves with her. With all the changes in their life, the couple decides to delay their wedding, which is made all the more frustrating by the shotgun pregnancy wedding of Violet's sister (Alison Brie) to Tom's best friend (Chris Pratt). By the way, I find it interesting that Emily Blunt is the only member of this cast who can't put the words "sitcom star" in front of her name.

Tom hates Michigan, and there are complications, as we expect. There's a a love triangle, there's a break-up, it's all predictable. I've said before that I don't see predictability as a bad thing, but here it's just so boring. I'm getting a little sick of Jason Segel making movies exclusively so he can make out with actresses he has a crush on, and he and Blunt have so little chemistry together that it's not even interesting to watch him do it. When the film finds a joke that works, mostly coming from the great supporting cast (including Brian Poesehn, Mindy Kaling, and Chris "I'm in EVERYTHING" Parnell), it's genuinely funny, but more often than not, the jokes fall flat. What's worse is that the flat jokes get repeated over and over again, because it's worked in Apatow movies.

Long stretches of the movie go by with absolutely nothing developing; instead, we just watch these unlikable people be happy, then be sad. When the obvious antagonist (Rhys Ifans) is introduced, you actually find yourself yelling "OH GOD JUST CHEAT ON HIM ALREADY," just so that something is happening. Even the (now-changed) IMdB plot synopsis for this movie is uninteresting: "Charting the ups and downs of an engaged couple's relationship." That's right, folks. Both the ups AND the downs. That's not a plot summary, that's a description of a data sheet. 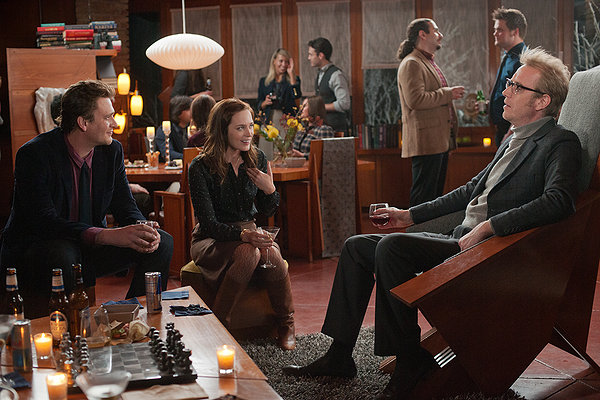 Can we just hurry it up already?

There is one bit of praise I have for the film, though: Engagement contains some of the most realistically portrayed fights between a couple I've seen on screen. Much like Forgetting Sarah Marshall, there's not really a clear victor, and it's ambiguous as to which character is in the wrong, (Except when Tom leaves a loaded crossbow in the hands of a four-year old. That one's pretty blatant.) Anyone who's been in a long-term relationship can point at the screen and say "I've done that." This is the only time in the movie that Segel and Blunt are allowed to be actors, and it really works. The problem is, of course, that when the parts of the movie that are supposed to be enjoyable aren't, it makes me much more hesitant to watch these characters do the stupid, awful things I've done myself.


The Five-Year Engagement is an oddity in that it's not good enough for me to recommend, but not quite bad enough for me to condemn. For every two or three small positive moments, there's a large negative one. Ultimately, the entire film is a bit of a wash, and it's a shame to see so many potentially good elements not working. The whole film is Segel trying to repeat Forgetting Sarah Marshall again, while minimizing (but not eliminating) the wacky side characters. We liked those things, Jason. They were part of what made that movie good. Well, that, and occasionally something would happen in that movie to move the narrative forward. Maybe you should go re-watch that one, Segel.

MINORITY REPORT: "Sir, here's that file you wanted charting the ups and downs of an engaged couple's relationship"

"Thank you, Tompkinson" *reads file* "Wow, that would make a great movie! Tompkinson, get Jason Segel on the phone!" - Ian "Professor Clumsy" Maddison