EXPECTATIONS: It's a good time to be Paul Dano, because now that Joseph Gordon-Levitt is busy being a big star, there's a lot of roles opening up for him! In all seriousness, I like Dano a lot, and he's already proven that he can stand up with some of the biggest names in acting, like Daniels Craig and Day-Lewis. Now he gets to try his hand opposite Robert De Niro. What's interesting about this is that even though we can all say De Niro is the better actor, only one of these guys has continued to make good movies in the past decade. De Niro's apparent handicap makes putting him and Dano in a movie together like hosting a boxing match between pre-Parkinson's Michael J. Fox and post-Parkinson's Mohammad Ali. Since I can't watch that, I'll watch Being Flynn instead.

REALITY: As a writer, I spend a lot of my time around other writers, and I've learned one thing: All writers are terrible human beings. The worst, however, are bad writers, and the best way to tell a bad writer from a good writer is that the bad writers spend more time convincing you they're good writers than actually writing. As a tale of two would-be writers, Being Flynn understands this and knows how to present it to us.


Being Flynn is adapted from the Another Bullshit Night in Suck City, the memoir of writer Nick Flynn, of whom I can safely say -- without knowing anything of his work -- that man certainly knows how to write a title. Paul Dano plays Flynn as an aspiring writer who takes a job at a homeless shelter after being kicked out of his girlfriend's apartment. Eventually, Nick's long-estranged father Jonathan (De Niro) ends up staying at the shelter. Unable to take his father into his life, and unwilling to leave his job, Nick is forced to deal with many of his personal issues while trying to help the drunk, delusional, abrasive Jonathan.

Duality is the key to this film, told in switching perspectives from Jonathan and Nick's points of view. Director Paul Weitz also employed this technique in his 2002 film About A Boy, before he got tired of making movies people actually liked. Just as it did there, it works to show the similarities and differences of the two men. This is one of those films that gets better the more you think about it. Clever use of flashbacks to Nick's childhood alone with his mother (the always-good Julianne Moore) juxtaposed against his current issues build the character slowly, without revealing everything at once. 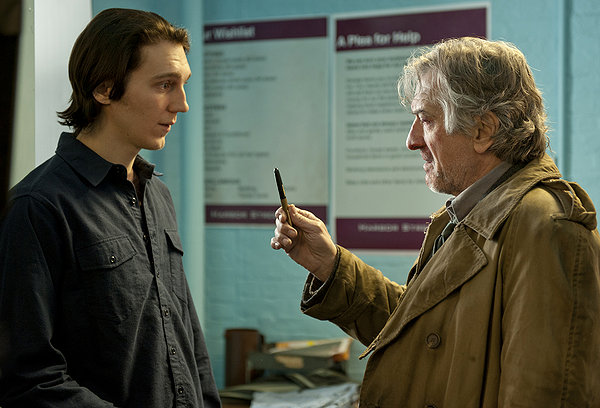 Yes Robert, that's called a pen. Now, why don't we get you back to bed? Yes, I'm sure New York is a wonderful city, Robert.

Let's talk about Paul Dano for a minute. Dano is a pretty great actor, but what's really impressive is his subtlety. He makes it very easy to believe that Nick is hiding deep-rooted problems, because Dano allows us to see him hiding it. You can see Nick pretending to be happy and comfortable, so Dano is acting the role of a person acting a role. This should be expected from a man whose main exposure to the world was a film wherein he didn't talk for two-thirds of the runtime.

However, the highlight of this film is De Niro. I want to praise him for still taking challenging roles, but the truth is that Jonathan Flynn feels essentially written just for him. By that I mean someone who worked on this film must have said, "Hey, this character is a self-serving sociopath who drives a taxi and wants to fix the world with violence. Wonder who we should call for that?" There is a new factor De Niro brings to the character, and that's a level of pretentiousness. With his refusal to believe that he is anything other than the world's greatest author, Jonathan represents the downfall of everyone who's deluded themselves into thinking they're better than the world around them. He's Travis Bickle mixed with a little Holden Caulfield, which means this movie is pretty much guaranteed to inspire somebody to try to assassinate something. All of that being said, it does nothing to prepare you for the fact that when De Niro starts ranting and yelling, it sounds like he's doing a dead-on Adam Sandler impression. That's just something I'm not at all sure how to handle.

One of the many features I enjoy about Paul Weitz's work is his ability to cover a great deal of topics and themes in a short span of time, while managing to keep anything from feeling too forced. Being Flynn deals with addiction, mental illness, homelessness, and suicide, all the while managing not to feel too preachy. In fact, it's darkly funny most of the time. Nick is a man with issues, a product of his self-loathing mother and overly confident father. There's a confidence to the film's handling of this as well, because Weitz is so sure you're going to care about these people and this story that he doesn't need to give you the details right up front. He's more than happy to save these reveals for the second act, and let you discover them little by little. It works, but the downside to this is that eventually having so much information come to light over such a span of time leaves us with no real satisfactory way to end. Although it's barely 95 minutes, the movie still feels about ten minutes too long, and it rushes its way to the finish. This is a minor complaint, though, and I wouldn't have noted it if the rest of the film hadn't been so good.


Being Flynn is a film where you have to wonder what the conversations were like on set. Dano is at about the phase in his career where De Niro was when he made Taxi Driver, but he still has yet to find that real star-making role. He's a deserving actor who needs to be following the actors he works with with a notebook. The only problem is, as long as he keeps taking roles where he's automatically in the back seat, he'll never be more than moral support.

MINORITY REPORT: Finding Forrester effectively killed Sean Connery's career, and with Robert De Niro's recent track record, Being Flynn might be the film that takes him from playing a man who lives in a homeless shelter to actually living in a homeless shelter. And Paul Dano might end up working there. - Sean "Keanu Grieves" Hanson