EXPECTATIONS: Twilight. Now that we've gotten that out of the way...

Last year's Alice in Wonderland, while both visually and narratively disgusting, somehow managed to take in a billion dollars worldwide. Billion, with a B (for 'bullshit'). You just don't make that kind of cash without convincing somebody else to try it themselves. Sooner or later we were bound to feel the effects of that tragedy, and a year later here we are: Red Riding Hood. If my guess is correct, it's a Tim-Burtonesque whodunit that screams "I'm dark! I'm edgy! I'm desperate for your money!" It's like the George Costanza of fantasy movies. Ugh.

REALITY: My guess wasn't too far off the mark. Red Riding Hood is every bit as dopey and melodramatic as you think it is. Surprisingly, though, it's not completely terrible. Oh sure, it's plenty bad, but compared to last week's Beastly, this thing is practically a masterpiece of romantic storytelling, and I only say that because it tries so goddamn hard. 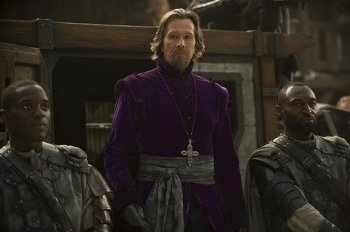 Gary Oldman: the whitest man in any room.The movie takes place in a medieval village named Daggerhorn (because that's not at all suggestive). The village has been haunted by a vicious wolf for two generations. The wolf attacks every full moon, and every full moon the villagers sacrifice a goat to keep it at bay. We quickly learn of a love triangle brewing in the village between three young villagers: Valerie (Amanda Seyfried), Peter (Shiloh Fernandez) and Henry (Max Irons). Valerie is meant to marry Henry, but she's in love with Peter and then people start dying. Valerie's sister is murdered by the wolf, and in a panic the villagers call upon Father Solomon (Gary Oldman) and the Knights Templar Travelling All-Stars. Solomon explains to them that the wolf is, in fact, a werewolf and that one of the villagers has been cursed. The movie then becomes a whodunit, with Valerie searching for the identity of the werewolf before it can strike again.

The biggest problem with Red Riding Hood is that the whodunit mystery doesn't work in the least. There are so many clues and hints and visual cues thrown out to lead Valerie (and the viewer) to the identity of the wolf that they might as well have hung a sign around the person's neck reading "Here be ye wolff! Mystery solv'd!" But then, at the last moment, Valerie still doesn't figure it out, and so the movie gives up and flat out tells us that the wolf is someone else entirely. No clues, no foreshadowing, nothing. It's an out-of-left-field decision that renders the bulk of the film kind of moot. More than anything, it suggests a lack of faith in the audience to play along. If we can't be trusted to follow along with the simplest of mysteries and be rewarded for it, then of what use is the mystery? Just get it over with and tell us what's going on so we can enjoy the rest of the movie. For example, the action...

Wait, why is there action? Isn't this just a story about a girl being haunted by a werewolf? How much action could there possibly be? Lots, as it turns out. There are four or five sequences in which all the menfolk have to do battle with the werewolf in some kind of epic showdown. Each of these encounters is sillier and more fake-looking than the last. Attention Catherine Hardwicke: This is a fairy tale, not fucking Beowulf. This isn't some kind of epic heroic tale of man vs. beast, it's supposed to be a coming-of-age story about a young woman. Why you needed to embellish that with bullshit action cliches is beyond me.

Speaking of action and swordplay and young women, there's an awful lot of suggestive imagery in this film. After a while it becomes pretty hard not to notice. First, there's the town itself. For starters, it's named "Daggerhorn." Also, doors are affixed with spikes, railings have sharp wooden points, and even the walls of the village are made of trees cut down to pikes. They're all obviously meant for protection, but the film is constantly threatening to impale somebody on one of them. (I wonder who...) Then, of course, there are all the heavily armed men in the village, each carrying a sword or an axe with a point at the end. The only time anyone kills anything is by stabbing it with a sword. Even the trees surrounding the village are covered in giant thorns (which comes with its own set of questions, specifically "what the hell kind of trees are these?"). The image of Valerie wandering through the forest pretty much says it all: Everything in this film is trying to rape her. Oh, and then there's the wolf. When you think about it, the movie really boils down to a "Lady or the Tiger" metaphor. 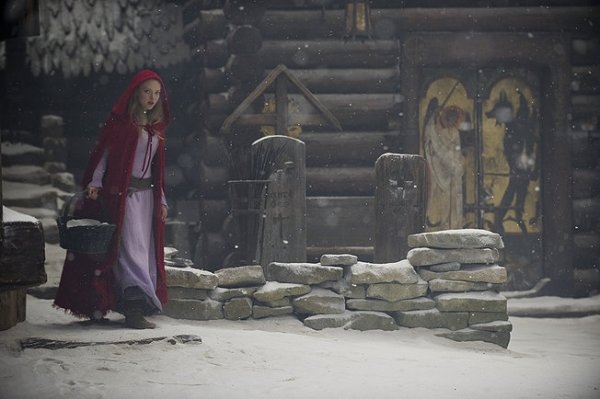 The climactic "going to grandmother's house" scene that you've all been waiting for!

Despite the terrible writing and obnoxious phallus overload, there are a few things to enjoy about the film. Chief among them, Gary Oldman. Drop Gary Oldman into any medieval setting (or any setting, really) and watch him go to town. Oldman shows up just as the movie starts dragging and he lifts it back up all on his own. Of course, one man can only do so much before the other actors have to pitch in and keep things moving. Most never do. Amanda Seyfried is more than capable of carrying this film, and for the most part she does, but she is also sometimes tasked with unsalvageable dialogue.

Above all else, the word I'm forced to return to is "silly". Red Riding Hood is incredibly silly. It tries so hard to be romantic that it almost succeeds in spite of itself, and were it not for some incredibly stilted acting and ridiculous plot twists, the film might have come out halfway decent. If the film is a hit, I'm sure studio executives will run straight to the library to figure out which fairy tale they can shove dick imagery into next. That's how the cycle perpetuates itself, I guess. Hollywood fucks up something so well they just have to try it again.

MINORITY REPORT: If I were to adapt "Little Red Riding Hood" for modern audiences, I think I'd attempt to make it into a subtle comedy of etiquette wherein the young girl is desperately trying to appease her grandmother and not offend her with observations of how wolf-like her appearance has become of late. Then the wolf would get all belligerent about how it takes its tea and the whole thing would lead to some hilarious misunderstandings. - Ian "ProfessorClumsy" Maddison