D2: The Mighty Ducks and Catharsis through Castration

Freud frequently spoke of castration anxiety, a boy's fear of losing his genitalia and sexuality at the hands of his father. But D2: The Mighty Ducks rejects that archaic theory and proposes that a modern man may be able to not only live with his castration but also benefit from the act and its symbolic cleansing of the body and mind.

D2 opens with hotshot Gordon Bombay sustaining a leg injury during a hockey match. The match is presented in a montage that links this event with Bombay's childhood, making his injury a return of his sexless self; an allegory for castration. This event leads to him dropping out of competitive hockey (sexual pursuits) and seeking mentorship from his elderly friend. As he learns to deal with the immediate fallout of his castration he is approached to lead Team USA in the Junior Goodwill Games. 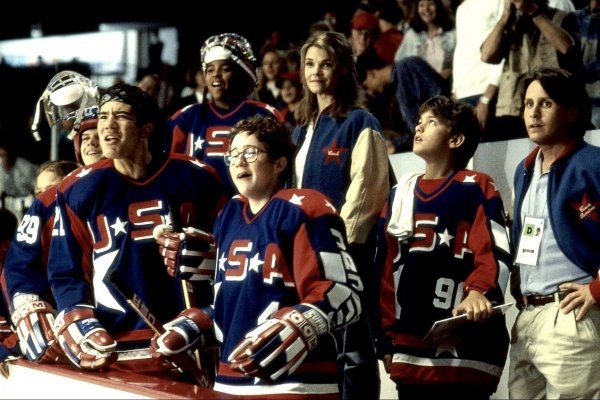 Those sure are some mighty looking ducks.

The Junior Goodwill Games represent the trials of a man struggling to accept his fate as a sexless and impotent individual. His figurative castration has opened his eyes to a world where he has been freed from the burdens of the penis and its pressures. Fame, celebrity, and the expectation to perform weighed heavily on Bombay, but his "post-castration anxiety" persists. The agent who comes to the hockey shop talks about doctors who are doing experimental treatments, some involving replacement ligaments. The agent is giving Bombay an option: attempt to regain his penis and the pain it carries with it, or seek catharsis and explore the benefits of his new-found castrated world.

The Ducks' old rival team attempts to stop Team USA from assembling, but they are defeated in the midst of rows of phallic boats. Their penile surroundings cannot bring them any security. In fact, the decision to shoot the fight as seen through the gaps between these boats is a comment on the uselessness of the phallus. The rivals are seen stripped down and tied to a tree, their exposed nature highlights the weakness of their dominance over symbolic castration.

The trials of the Junior Goodwill games represent challenges to Bombay through his castrated existence. Trinidad and Tobago's defeat rests at the hand of their heavily stereotyped happy-go-lucky and desexualized behavior. Their overt freedom from sexuality isn't a sustainable model for Bombay, who correctly sees their freedom as a soon-to-be-shattered illusion based on lack of exposure to the outside world.

One conversation in the bleachers is meant to stand in for Bombay's subconscious -- a Team USA player says to another: "Hey, you got a girl in the stands?" When he receives no response, out of the subconscious fear of how other people will view his castration, he consoles Bombay's psyche by reassuring him: "Don't worry about scouts (the external influences to conform and succumb to the pressures of sexual ability), just play your best (and find comfort and personal relief in the life of a castrated male)." 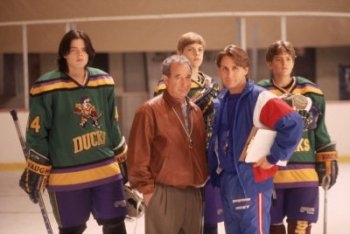 Although maybe not so much here.Germany loses to Team USA's flying V, a somewhat obvious reference to a vagina, which Freud speculated was the driving fear behind castration in males. But it has been reclaimed and turned into a powerful weapon for the advocates of castration.

The first match up with Iceland is the first true challenge to the cathartic influences of castration. The Icelandic team's rigid gender roles and overt displays of masculinity are direct threats to the utopian and idealistic Team USA. And their initial victory demonstrates the raw power of the penis. It is this doubt that lingers with Bombay, before he comes to the realization that it is better to fight these defenders of the penis than to give in to defeat.

The Icelandic Vikings (an overt homage to the rampant sexual deviancy of the Scandinavian and Northern European naval explorers) are projected to win the series. Their victory over team USA would be a victory for sexuality over a free and castrated life. This inevitability is challenged by Bombay, who is struggling with the material highs that the corporate sponsorships and self-righteous flag-waving have brought him. Women, expensive hotels, boats, and exquisite foods are all within his grasp. He deliberates between whether these rewards are worth giving up to live a less complicated and more focused life.

The true nature of these rewards is exposed after team USA's first loss. The luxury of LA is exposed as a fickle and erratic lifestyle. Victory, particularly sexual conquest, can bring rewards. But failure and the constant pressure to perform are prices not worth paying; especially when a motivated individual such as Bombay can see that victory in other aspects of life is easily achieved when sexuality has been excised.

The sepia tones that bath Bombay's return to form and the rejection of corporate (sexual) corruption after his loss to Iceland are reminiscent of the childhood scenes from the beginning, Bombay is reclaiming his lack of sexuality and the freedom it brings him. For his final hurdle, during Team USA's final practice their carefree and joyous attitude is threatened by the Icelanders, who challenge Bombay to a one-on-one match. It is a symbolic challenge to Bombay's sense of self worth.

Gordon Bombay and Team USA's victory over Team Iceland in the end is the natural course of Bombay's journey toward catharsis through his condition. Their literal transformation into the USA Ducks is an outright rejection of the influences of the masculine drive behind nationalism, and their freedom to show their true colors is truly the last step in Bombay's acceptance of his new life as a castrated man.