EXPECTATIONS: Will Ferrell really needs to get his groove back. After a string of, frankly, terrible films (including Everything Must Go and this year's Casa de mi Padre), he needs to get his act together and find himself a hit. Hopefully my hometown hero/beard buddy Zack Galifianakis can help drag Ferrell back to hilarious, fighting form.

REALITY: It makes sense for a comedy like The Campaign to come out now, in the middle of a heated and completely ridiculous presidential race. What better time for an R-rated comedy about the absurdities of the American political machine? It would have been easy for The Campaign to lob quick jokes at Republicans or Democrats for 90 minutes and call it a day, but it instead it aims a little broader and comes away much funnier and more engaging for it. 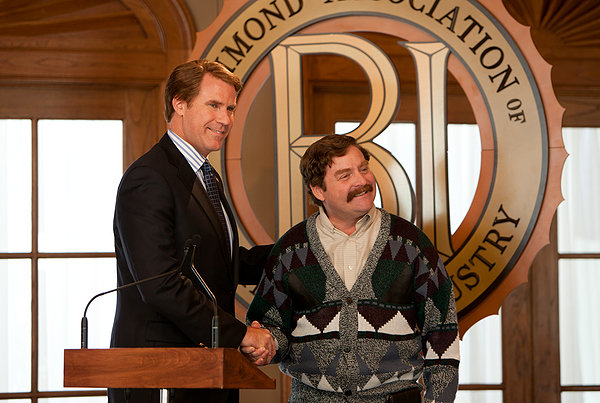 Ah, politics. The domain of the educated gentleman.

North Carolina congressman Cam Brady (Will Ferrell) thinks he has his re-election all locked up as he prepares to once again run unopposed. High-powered lobbyists the Motch Brothers (Dan Aykroyd & John Lithgow) have a different plan in mind for Brady's seat in Congress, and decide to back district local Marty Huggins (Zach Galifianakis) to run against Brady. Huggins gets assigned a dark, shady campaign manager (Dylan McDermott) to rebrand his cartoonishly wholesome lifestyle; meanwhile, Cam Brady and his manager (Jason Sudeikis) come up with a dozen crazy schemes to derail Huggins' campaign.

The way director Jay Roach approaches the politics of his film is arguably The Campaign's greatest strength. While Huggins and his constituency are painted as repressed and generally backwards, Cam Brady and his camp are depicted as equally ostentatious and despicable. It is pretty clear that Brady is meant to be a Democrat and Huggins a Republican, but their stances and beliefs on any issue are left out entirely, reducing the conflict to a battle of wills between two candidates. The Campaign is much more concerned with exposing the weirdness inherent in campaign season than examining the sides of any issue. This is a comedy, after all. Every time either candidate makes a boneheaded move like shooting the other candidate or punching the dog from The Artist, their approval ratings inexplicably jump a few points.

As comic leads, Will Ferrell and Zach Galifianakis are superb together. Both men have their own distinct style of comedy, and neither is marginalized to make room for the other; The Campaign almost becomes a contest between Ferrell and Galifianakis to see whose sense of humor will come out on top. As adulterous buffoon Cam Brady, Will Ferrell is basically playing former North Carolina senator John Edwards (mixed in with a bit of his George W. Bush character). He has the speech pattern, the haircut, and even the slimy politician grin down perfectly. Cam Brady is a man who's having too much fun being a politician to actually care about the job he's elected to do. He thinks he's a rockstar, and it's great fun watching Will Ferrell coast his character through this movie. 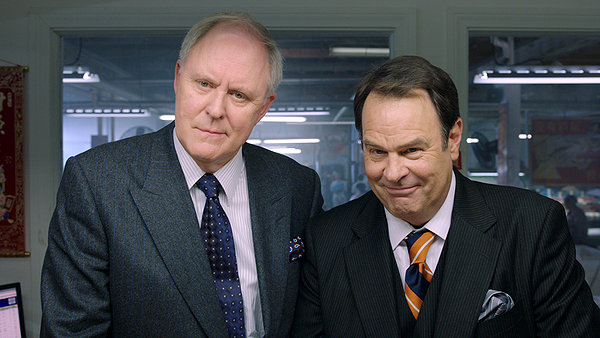 Oh, hello. Two of America's most beloved comedic character actors also happen to be in this.

On the flipside, Galifianakis creates a wholly unique character in Marty Huggins. He's not nearly the idiotic force of nature that Alan is in the Hangover films, but Huggins becomes the epitome of small-town cuteness. He runs a local tourism office that never sees any customers, he goes everywhere with his two little pugs, and he has the high-pitched voice of a scrawny man half his size. Jack McBrayer has a small role in this film as a local man who receives a horrifying phone call from Cam Brady, and it seems as though Galifianakis is essentially playing Jack McBrayer. They share the same sort of clean-cut wholesomeness, and it's difficult to tell whether that sort of character is being lampooned here or if it's just here to be a stark contrast to Cam Brady's cruder constituency.

The odd men out here are Dan Aykroyd and John Lithgow. While their presence in The Campaign is completely ignored in all of the film's marketing, they actually make up the backbone of the film's plot. The Motch brothers have some dastardly plans for the fictional town of Hammond, North Carolina (it's basically Fayetteville), and they're using Marty Huggins as a puppet to push through their legislation. What we come to learn is that they're pretty flippant in who they support, and it almost seems to be a game for them. Their part in the film turns The Campaign into something resembling Aykroyd's film Trading Places. Brady and Huggins don't get suckered into switching political parties, but their heated rivalry is almost entirely a fabrication, making them bitter rivals that hate one another seemingly for the amusement of billionaire lobbyists. The Campaign may not lean left or right too readily, but if there's one thing we can all agree on, it's that billionaire lobbyists are assholes.

MINORITY REPORT: We already have an outlet for laughing at American politicians, don't we? It's called "The News." Thank you, I'll be here all week. - Ian "Shit Club Comedian" Maddison