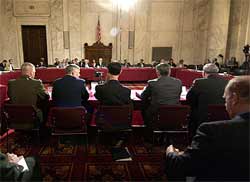 "Everyone please take your seat so we can resume the hearing," Chairman Harlock yelled over the din of many separate conversations. "Come on folks, we've got a long afternoon ahead of us."

Albert O. Brandyfield, former Secretary of Interrogations, was being grilled by the senate subcommittee on national security. He had already taken his seat at the table, his shriveled frame flanked by highly-paid Washington lawyers. He seemed shrunken since leaving his post, withered by the media attention on his past "mistakes." Though otherwise weakened, Brandyfield's black, button eyes glinted with keen intelligence.

Some on the left accused Brandyfield of authorizing and encouraging the use of torture during the previous administration. Many on the right were sympathetic to Brandyfield and believed any torture was conducted as a necessary means to provide for national security.

Brandyfield's cantankerous performance during the morning's session had demonstrated that the senators on the committee could expect no mea culpa.

"If we're ready, let's continue with the Senator from Idaho," Chairman Harlock said and pointed the handle of the gavel at the balding Republican. "Senator Kempt, go ahead."

Senator Kempt shuffled some papers and cleared his throat before speaking.

"Thank you also, Former Secretary Brandyfield, I know you have received a lot of guff from my esteemed colleagues today and you have been so very patient." 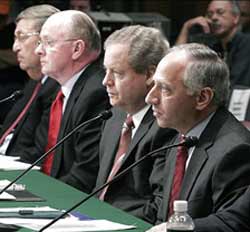 "Good. That's good, because I do have a question for you," Senator Kempt paused again to shuffle his papers. "Most of the questions today have been directed at whether or not you believe the US government tortured and what exactly your role was in shaping individual interrogations. I would like to broaden the scope of the questioning out into the general question of whether or not torture is ever okay. If a time bomb is ticking in a school full of babies and you have the guy who you know can tell you where the bomb is and how to disarm it, will you torture him?"

"That's an excellent question, Senator. First, I would like to reiterate that the United States does not, as a rule, torture. We have a variety of interrogation techniques available to us and we utilize these under normal circumstances. However, to answer your hypothetical, the United States would act in the best interests of national security to obtain time-sensitive information."

"So if there was a threat to America and the only way to get the information was torture, you would torture someone?"

"In order to protect America we would do anything in our power to get that information," Brandyfield answered. "All options are on the table in those situations."

"I yield the balance of my time," Senator Kempt noted.