EXPECTATIONS: About this time of year we start mopping up some of the releases that got away from us the first time around. Here Comes the Boom is exactly the kind of film that we would usually sweep under the carpet. These janitorial metaphors have no relevance to this story of a school teacher who becomes an MMA fighter in his last-ditch effort to save the school's music program, so don't dwell on them too much. Anyway, I worry that Here Comes the Boom will either try to make us believe that Kevin James is an athlete or it will simply make a mockery of both sports and education by having us root for an oversized oaf. Basically, I can't see this going well.

REALITY: Remember Goon? I wouldn't blame you if you didn't, because I don't think a lot of people saw that film. Surely you recall my review, though, in which I praised Goon's believable characters, human relationships and overwhelming sincerity, but complained that it just wasn't funny. After some time has passed, I have decided Goon is deliberately unfunny in order to build itself in this way. Here Comes the Boom takes, in some ways, the opposite approach to the same idea: A well-meaning guy falls into a violent sport because his tenacity and thick skull allow him to take hits without sustaining injury and he wins the heart of the woman he loves and the respect of his peers through the sheer virtue of never giving up. However Boom does this with paper-thin characters and a plethora of gags and comedic situations, making for a much weaker film than Goon. 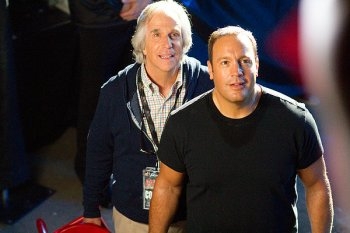 Remember when America loved you? Either of you can answer.The well-meaning guy in this instance is high school biology teacher Scott Voss (Kevin James); the woman he loves is fellow faculty member Bella Flores (Salma Hayek); and his peers are music teacher Marty Streb (Henry Winkler) and Dutch personal trainer Niko (Bas Rutten). When Scott learns that the school he works for is cutting funding to the music department, he is determined to help raise the funds to save Marty's job, which is what leads him in a roundabout way to becoming a MMA fighter, because they get paid even when they lose. I don't know, just go with it, it's an underdog movie.

As underdog movies go, this certainly isn't Rocky. In spite of its constant lip-service paid to inspiring people and Scott's never-ending efforts to make a difference to the children of his school, it never manages to be as inspiring as that film whose form it replicates as often as possible. This is exacerbated by Boom constantly throwing new motivations at you. Gotta impress the woman you love, gotta save Marty's job because he's having a baby, gotta help these immigrants become American citizens, gotta inspire these kids, gotta earn the respect of the UFC, gotta expose corruption in the school system, gotta help American business owners, etc.

This all makes for a film that never really settles down and focuses on anything. Our hero is almost immediately revealed to be an incorruptible saint, so it makes no sense that he is so down-and-out in the opening scenes. Five minutes later he has two new best friends and is a semi-professional athlete. It's just a stretch that is hard to accept, a school teacher fighting his way into the UFC in a matter of months to raise a very precise amount of money to save the school. It's hard to really care when the balance favours gags over sincerity and the gags aren't really that good. This attempts to be more akin to Dodgeball than Rocky and still manages to fall way short of the mark. 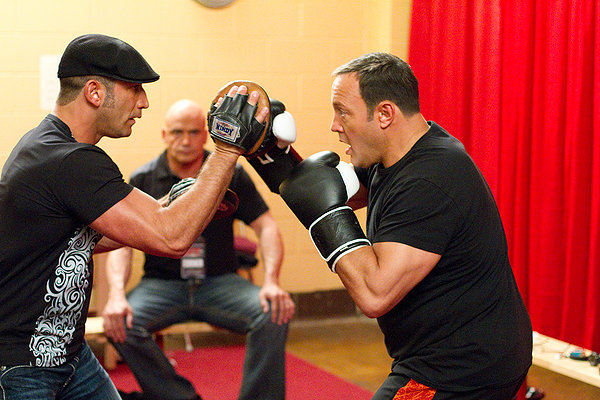 Somehow, the fact that he worked so hard makes it much less funny.

The one element of this film that really does work is a surprising one: Kevin James. James made a career out of being fat and appearing in goofy romantic comedies about zookeepers who talk to the animals, so it's altogether unexpected to see him playing an amateur athlete. He has clearly worked hard for this film: Yes, he's still doughy around the midriff, but he's now a big-shouldered, barrel-chested fighter who can throw punches and kicks very convincingly. He doesn't look like an Ultimate Fighting Champion, but he does look like someone who can fight and it's almost jarring to see. Is this really Kevin James, the King of Queens? I feel like the entire film is a massive disservice to his obvious dedication. He needs to ditch these starring vehicles, take a pay cut and start making a name for himself as a hard-working character actor.

I imagine it would have been tempting to fake the fight scenes and reduce them to slapstick, but the whole film is coming from a place of reverence to the sport. There are montages peppered throughout that demonstrate some genuine cinematic craft, and the climactic fight scene is every bit as good as it needs to be, even if it is hard to accept that Kevin James could have a fair fight with actual MMA fighter Krzysztof Soszynski. We accept it, it is MMA. We're not watching terrible fumbling and bumbling that amounts to very little, we're seeing genuine athleticism on display here.

However, all of this reverence to the sport sits uneasily with the lack of characterisation. What are we supposed to be laughing at here? Fat man goes fighting? He made it not funny by working so hard. So what's left? Nothing. And that brings me back to Goon. When you realised there were no laughs to be had in Goon, you still rooted for the hero, you still believed in him and you wanted to see that third act so badly. When two professionals square off and the result doesn't matter, it's human. When you do a David and Goliath climax, you're either Rocky or a failure. This is the latter.

MINORITY REPORT: Let's run this into the ground! Coming next summer, Kevin James stars as a fat president who loves making poop jokes to union soldiers in Farts of the Nation. And in 2014, James returns as a fat secret agent who sneaks Americans out of Iran in Paul Blart's Cargo. - Joseph "Jay Dub" Wade