EXPECTATIONS: After this summer's surprisingly intelligent Abraham Lincoln: Vampire Hunter, Steven Spielberg's biopic about the real Mr. Lincoln appears to have its work cut out for it. Six months ago, I never imagined I'd be saying that, but there it is. If Spielberg can do for President Lincoln what he did with last year's War Horse, he could have this year's Oscar race all wrapped up (because let's be honest, the vampire movie ain't winning squat).

REALITY: In the grand scheme of modern world history, there are few figures as compelling as Abraham Lincoln. It comes as a colossal disappointment, then, when one of America's greatest storytellers manages to fumble one of America's greatest stories. Steven Spielberg's Lincoln is a film that feels more like an obligation than a labor of love. It's a monotonous slog through history that we already know far too well, anchored by an admittedly brilliant central performance. 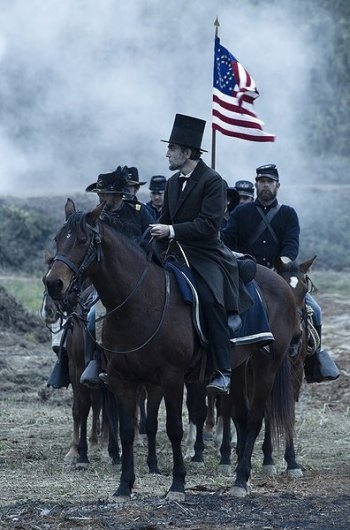 The iconic top hat. Does anyone even care anymore?As the film opens, Abraham Lincoln (Daniel Day-Lewis) has just won his second term as president, with the Civil War still raging on but drawing to a close. With a new term on the horizon, Lincoln sets his sights on passing the Thirteenth Amendment, which would abolish slavery in the US once and for all. Two obstacles stand in his way: Rabid opposition from the Democrats, and word that the Confederate Vice President (Jackie Earle Haley) is on his way to negotiate peace. Meanwhile, Lincoln's Secretary of State (David Strathairn) and Representative Thaddeus Stevens (Tommy Lee Jones) do everything in their power to see that the amendment gets passed, and his wife Mary Todd (Sally Field) lectures him on his plans for abolition.

Daniel Day-Lewis inhabits the role of President Lincoln effortlessly. When we first meet him here, he is exhausted. His is a face destroyed by years of worry and anguish over his country's ills, and the last thing he wants is to have his Gettysburg Address recited back to him by that kid from Mars Attacks. This Lincoln is all business, and yet it's his moments of humor that endear him to us. On more than one occasion, Lincoln captivates a room with a goofy story about Ethan Allen or his limited understanding of Euclid. These stories come at strategically inopportune moments, and half the comedy is in watching people squirm as their president yammers on, but they work wonders in reminding us just how down to earth this man was.

It's a measured, fascinating performance, which makes it all the more a pity that this character winds up being sidelined for most of his own biopic. See, Lincoln isn't so much The Abraham Lincoln Movie, but rather The Thirteenth Amendment Movie. The film spends far more time in the House of Representatives with Tommy Lee Jones and his awful wig than in the White House with Old Mr. Lincoln. Of course, Lincoln makes frequent appearances in various cabinet meetings, and he commands every room he enters, but the bulk of the film is about the fight to pass this one piece of legislation. The fight to end slavery is of paramount importance, yet all the scenes in Congress remind us that it's a miracle any bill gets passed through all the political finger-wagging and name-calling. The House of Representatives is kind of a silly place, and it's eminently clear why we never romanticize this part of the story the way we romanticize Lincoln.

The vast majority of the film plays out like Schoolhouse Rock, minus the music and brevity. James Spader and Tim Blake Nelson appear in the second act to run around Washington bribing people for votes, and for a moment or two Lincoln actually begins to come alive. Sure, they may have lifted these scenes straight out of the B-plot from The American President, but then there's a reason civics classes use that film to explain how the political machine works. Spader, especially, seems like he's having a lot of fun playing the film's de facto comic relief. I know it doesn't sound like much, but in a film this lethargic and self-important, you take what you can get. 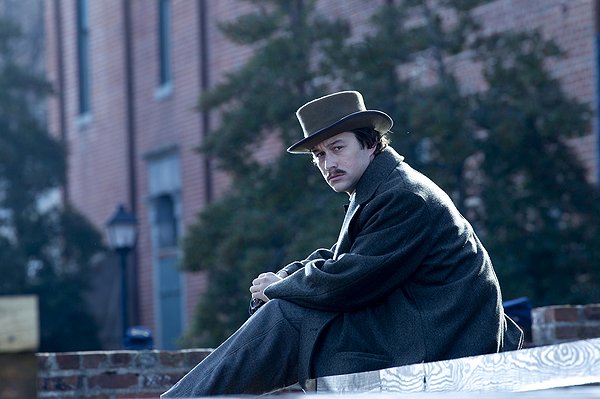 What am I doing here? I'm a leading man!

There are bits and pieces of the rest of Lincoln's story peppered throughout the film, but it's clear that Steven Spielberg and screenwriter Tony Kuschner aren't particularly interested in exploring them. One thread begging to be fleshed out is the complicated relationship between Lincoln and his son Robert (Joseph Gordon-Levitt); Robert is little more than a footnote here, with rising star Gordon-Levitt stranded in the background of someone else's movie. What's here does little more than reaffirm that Steven Spielberg is now, and forever will be, a director with daddy issues.

Daniel Day-Lewis is unquestionably the main draw here, and Spielberg photographs him with all the reverence that the role requires, but as soon as Lincoln leaves the frame, all the life is sucked out of the film. This wouldn't be such a problem if Spielberg and Kushner had limited their scope, but at two hours and thirty minutes, it is absolutely interminable. Would this have been a better film without its titular character? Certainly not. Would this have even been a movie at all without all the goofy congressional material? Doubtful. The fact that Spielberg couldn't reconcile one of American history's greatest triumphs with the final days of a weary president ought to go down as one of the biggest cinematic disappointments of the decade.

MINORITY REPORT: I don't know if I'm ready to accept an Abraham Lincoln who isn't a vampire hunter. I mean, what does he hunt if not vampires? In all seriousness, why is it deemed important to make a film based entirely on historical fact? If there's one thing that flies entirely in the face of artistic truth, it's fact. - Ian "Professor Clumsy" Maddison