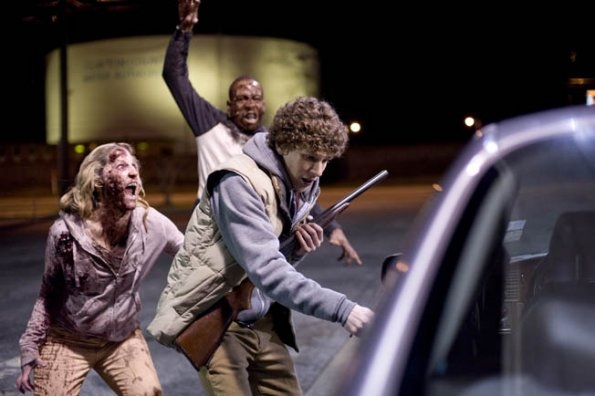 I, for one, do not wish that I had Jesse's girl...or the other dude that's chasing him, for that matter.

Zombieland: Perfect for horror fans who thought Shaun was too cerebral

Judging by the trailer, Zombieland looks like a cross between Shaun of the Dead and Adventureland, both of which I enjoyed. Plus, Jesse Eisenberg seems to be the brightest young actor in Hollywood, always taking the high road. Unfortunately, Zombieland also looks derivative as hell, eschewing homage for recreating the plot of the former and the setting of the latter. Then again, having been excited for Year One has taught me to be more cautious.

2009 has been a good year for Hollywood horror. While the studios have formerly been content to turn out awful genre fare that could not compete with their more adventurous indie brethren, there have three previous pleasant surprises -- Drag Me to Hell, Orphan and Sorority Row. Now there's Zombieland, which, like most Americans, wallows in gross-out humor rather than adopting the refined wit of its European counterpart, Shaun of the Dead. Fortunately, it works.

After a zombie apocalypse that would make Max Brooks piss in his footies, two adventurers named after their respective destinations, Columbus (Jesse Eisenberg) and Tallahassee (Woody Harrelson), fight for survival while entertaining a three-pronged goal: Fight their way to the East Coast, which is allegedly zombie-free; outwit two young con artists (Emma Stone and Abigail Breslin) who are capitalizing on the dire situation and find the world's last remaining Twinkie stash. But as Confuscius, Nietzsche or Cobain say, "It's not the journey, but the destination." And somehow, their destination doubles back on itself when all four decide to journey to the Disneyland-inspired Pacific Fun Palace...or something like that; the details don't matter.

Zombieland breaks no new ground as far as horror flicks are concerned, but the morbid sadism of Tallahassee is consistently entertaining...so much so that Zombieland becomes a bit of a drag when the camera wanders away from him. Watching Harrelson channel Mickey Knox as he bashes, slashes and shoots his way through the staggering hordes is a thing of beauty, an element that far surpasses character interplay, clever dialogue and everything else any intelligent filmgoer should expect from a movie.

Well, fuck it. Who needs wit when untold gallons of gore and miles of intestines fly across the screen like it's Peter Jackson's wet-dream interpretation of Cloudy with a Chance of Meatballs? Zombieland is funny -- nay, it's a goddamned riot -- and it serves as proof that maybe some of the smarter studio executives have decided to, you know, actually earn box-office receipts in these troubled times.