EXPECTATIONS: "Oh, man, this weekend is amazing! We have the release of the most testosterone-laden flick of all time, starring every action star from the past twenty years, and we have the highly anticipated adaptation of a highly original independent comic that pays reference to all kinds of old-school video games and nerd stuff, from the director of Hot Fuzz, one of the finest comedies ever! This is the biggest weekend of the summer, possibly the year! What am I reviewing?

"You guys are dicks."

REALITY: It's an interesting feeling, going into a film with no previous knowledge of what you're about to see. I knew absolutely nothing about Eat, Pray, Love as I walked into the theater, and for that I was a happier man than I would be two hours later. (That's not technically true: I knew that this film could only hope for third place this weekend at best, and that my ticket was contributing to this futile effort.)

Eat Pray Love tells the story of writer Liz Gilbert (Julia Roberts), who learns that she is barren and infertile, and decides to throw a year-long incredibly expensive pity party for herself. She freaks out, leaves her husband Steven (Billy "Hollywood's Blandest Man" Crudup) for basically no reason, has a tryst with a terrible young actor named David (James Franco, in his easiest role ever), and then travels around the world on a journey of self-discovery and audience-irritation. She spends time in Italy, where she eats; India, where she prays; and then finally in Bali, where she fucks Javier Bardem. Despite the film's best efforts, no tears are jerked. 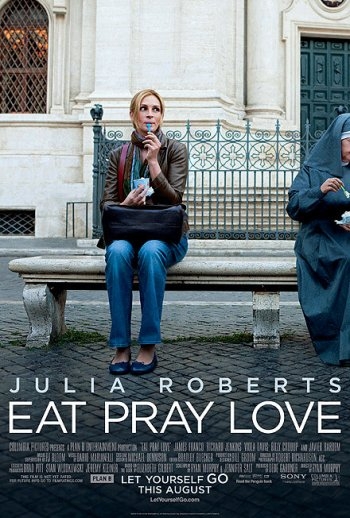 At one particularly blatant moment of pandering, Liz goes off on a rant about how she's tired of counting calories, and how no man will ever decline seeing her naked anyway, so she's going to eat all the pizza she wants. That's right ladies, your doctor is just another man trying to keep you down. Type II Diabetes is a tool of the fashion industry, so chow down! It's almost as if this line was written by the Rascal Scooter Company. At this point, I felt disgusted with myself for watching this. If I wanted to watch women who aren't good-looking enough to be considered cougars masturbate for two hours, there are Web sites I could visit.

I would even go so far as to say Eat Pray Love is worse that Twilight, because while Bella is a bland, unnoticeable lump of a character, Liz is written almost like she's going out of her way to anger you. Her husband is never shown negatively, yet we're supposed to sympathize with her when she takes him to divorce court? He's even shown fighting to win her back, but there is never any decent followup on his arc after the first half-hour. Then her love affair with David is never developed, to the point where we don't even know how long it lasts. It is entirely possible, probable even, that when we see her crying over David, she is crying over a man she's known for a week and a half. It's worth noting that the first time they meet, David is starring in a play which Liz wrote. This means that the first guy she's interested in piques her interest by reading her own words back to her. It is as deep and as creepy as getting turned on by listening to your own outgoing voicemail message.

Furthermore, Liz learns basically nothing from her journey. Two hours in, and she's still the same selfish and immature person she was to begin with, save for the most ham-fisted attempt at showing character growth I've ever seen. Liz uses all the rich, white friends she makes along the way to help buy a house in Bali for a divorcee from an abusive relationship and her daughter Tu-ti. Also, in Italian "Tutti" means "Everyone," SO IT WAS LIKE SHE WAS HELPING EVERYONE, YOU GUYS. This actually happens. In fact, Liz doesn't show any change until the last ninety seconds where she decides "Oh, maybe it's okay to be happy" and boats off into the sunset. This is the conclusion we are given. And everyone else is happy too, including her ex, or something. 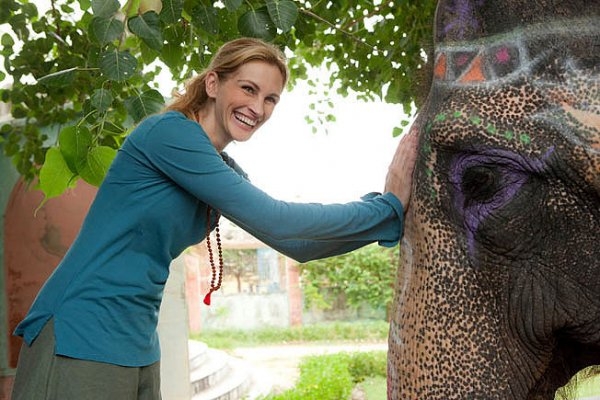 Ha ha ha! It's funny because I touched an elephant!

If there's one thing the film can not be accused of, it's using the "Magical Negro" trope in a storyline that seems tailor-made for it. For traveling so far around the globe, the most important characters in Liz's life sure are white. The closest we come to ethnic fetishization is a toothless Indonesian palm-reader who, in the end, turns out to be pretty damn useless, and doesn't even remember Liz the second time they meet. Another character, a 17-year old Indian girl Liz befriends, is being married off to a man she doesn't want to be with, because she wants to go to college and study psychology instead. Because the movie wouldn't want to accidentally slip into an interesting story, and because Liz is so obsessed with her own "issues," she doesn't have any reaction to her new friend's possibly ruined life, and doesn't even give her a gift at the wedding. Instead she says she's been dedicating her morning prayers and meditations to her and her new husband. That's it. Her wedding gift is simply saying "I hope you are happy together" and the girl actually thanks her for it!

I also want to acknowledge here that while she's in India, Liz finds the singular "God," despite living in a Hindu, polytheistic society for months. This is so your Grandmother can feel cultured while not challenging her Christian ideals watching this movie, and so we can prove that Liz doesn't listen to a damn word anyone around her says.

Probably the biggest failure in the film is the unrealistic notion that everyone instantly loves Liz and wants to help her on her journey. Every woman she meets befriends her, despite her lack of redeeming qualities, and every man wants to bang her, despite her lack of teeth that don't resemble those of a horse. At one point, an unpredictable missing Indian elephant magically appears and comes to her and her only, because she's just so special. (How does one even lose an elephant?) Some characters with whom she supposedly forms life-long bonds aren't even given names. One woman shows up literally for no reason other than to invite Liz to a dance immediately upon meeting her, then drop out of the movie entirely. (She had the right idea.)

All of this becomes worse when you realize that Liz Gilbert is a real person, and Eat, Pray, Love is based on a book she wrote. It's the kind of thing church groups forward to each other in e-mails, calling it "inspirational," while ignoring key facts, such as this one: Liz Gilbert is not just any rich white woman. She is a travel writer. She didn't go off on a voyage of self-discovery; she went to work. She even paid for the trip with an advance she got on the book she was going to write, and this film is the result of that devil's deal. There's not a shred of sincerity to the story at all, and yet she still can't make herself into a likable character. Liz Gilbert was given the opportunity to tell the entire world what she is like, to write the world's biggest personal ad, and this is what she came up with. What kind of a bitch must she be in real life?

MINORITY REPORT: I don't know what you're complaining about. If your scores are to be believed, it was still better than Sex & The City 2. -Ian "ProfessorClumsy" Maddison