EXPECTATIONS: To say my expectations for Scott Pilgrim vs. The World are anything less than unreasonably high would be just plain lying. Any new Edgar Wright film deserves attention, particularly one based on a comic series that's so intentionally silly and self-aware. On top of that, the trailers have been taunting me for months, almost like Hollywood's way of saying "We're sorry for all the shitty movies this summer. Here, have a big bowl of Gummi Bears and Mountain Dew cereal!" In other words, I expect nothing less than a hilarious, whip-smart sugar rush.

REALITY: Scott Pilgrim is quite possibly the nerdiest movie ever made. Half the score is composed in chiptune; motion lines and words like THONK and SMACK fly around emphasizing every other sound or action; and characters frequently pull unreasonably large weapons out of seemingly nowhere. If any of those are things you think you'd like to see in what is essentially a romantic comedy, then Scott Pilgrim might be for you. Much of it is eye-rollingly goofy, and I wouldn't blame anyone for completely dismissing it as geek-culture nonsense. However, the movie does manage to make all the visual excess work in its favor and play with gaming minutia in a way nobody's really ever pulled off before. 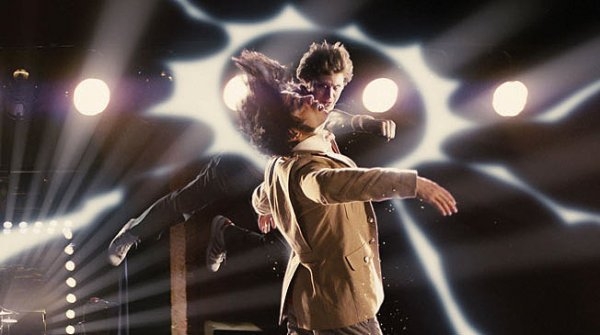 Of course, if Michael Cera punched you in real life it probably wouldn't make this much of an impact.

Based on a series of graphic novels that the good folks at my local Barnes & Noble have never heard of, Scott Pilgrim stars Michael Cera as a 22-year-old manchild named George Michael Nick Twisp Paulie Bleeker Scott Pilgrim. As the movie opens, we learn that Scott plays bass for alterna-crap band Sex Bob-omb, shares a bed with his gay roommate (Kieran Culkin), and is presently dating a Chinese high-schooler named Knives (Ellen Wong). That is, until he meets Ramona Flowers (Mary Elizabeth Winstead), an Amazon delivery girl who uses Scott's dreams as an express route between stops.

When Scott and Ramona start dating, they're confronted one by one by Ramona's seven ex-boyfriends (dubbing themselves The League of Evil Exes). In order to prove himself, Scott has to defeat each of her exes in combat, leveling up and scoring points after each victory. That last bit is key, because the bulk of the movie is constructed in the likeness of a video game, with boss battles, flashy graphics, power meters, the whole nine yards. Which is fine, by the way. That's the movie's central gimmick, and they're smart enough to play it out to the point of not simply becoming a feature-length Nintendo cutscene. 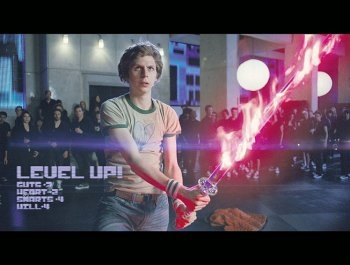 Exaclty the kind of joke your dad wouldn't understand.The visual scheme works surprisingly well, giving Scott Pilgrim an almost two-dimensional quality similar to many of the games it references. On the other hand, the boss-battle structure is sort of the movie's biggest problem. The actual story of Scott having to reconcile himself with Ramona's past, as well as his own, is a perfectly good one to build a movie around, but when that story has to be told through a series of escalating fight sequences, it's hard not to view the film as being every bit as juvenile as its title character.

Scott is kind of a hopeless leech, mooching financially and emotionally off of just about everyone, and we want to see him learn his lesson and grow the fuck up already. We watch him grow as a character through the veneer of 8-bit graphics and kung-fu fight sequences, and while a lot of the action is exaggerated (and exaggerated well), we understand that this is how Scott views the world. Scott's "pee bar" drops to zero when he goes to the bathroom; His confrontation with Ramona's most recent ex-boyfriend, Gideon (Jason Schwartzman), is explicitly labeled "Level 7". As far as we know, this is all the way Scott sees it in his head.

Director Edgar Wright explored very similar themes in his debut film, Shaun of the Dead, but to greater effect. The story of Shaun pulling himself out of his 20-something slacker phase and trying to win back the girl worked under the guise of a zombie film because the outbreak forced Shaun to realize that living obliviously was going to get him and his loved ones killed. Here, though, we watch Scott confront some serious emotional issues by using a flaming sword he pulls out of his chest. It's hard to appreciate the story of personal growth and tackling inner demons when those demons are personified by people exploding into coins, though I do love the fact that nobody looks particularly concerned whenever this happens (what do you think the coroner's report looks like?) 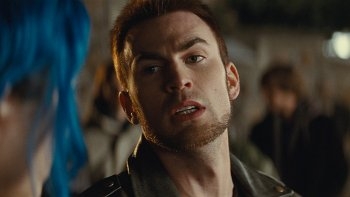 It's the obligatory Chris Evans screenshot!But enough complaining about how a film called Scott Pilgrim vs. The World is about a guy called Scott Pilgrim fighting people. While I can't say I'm a fan of the visual metaphor all that much, the visual design itself is pretty outstanding. It may have all the subtlety of a giant mallet coming out of a girl's purse, but damn, that giant mallet looks cool as all hell. I was a bit worried that Wright and his effects crew wouldn't be able to pull off a lot of the Nintendo-like graphics without making it all look gaudy and out of place, but they've acquitted themselves nicely. Wright manages to nail that cartoony-yet-still-live-action look that movies like Speed Racer and The Spirit tried so desperately to achieve, and he makes it look completely effortless.

And then there's the cast. As Scott, Michael Cera is still playing himself, but this time he's able to register more than interrupted stutters and assorted mumbles. He still runs like an idiot, though. Winstead's Ramona is the weak link. She tries to play Ramona as guarded and reticent, but more often comes off as generally bored at the sight of Scott constantly getting the shit kicked out of him. Nearly the entire supporting cast makes up for any shortcomings in Cera or Winstead, though. Kieran Culkin is hilarious as Scott's roommate Wallace; Ellen Wong manages to make Knives adorable, creepy and badass all at once; and Ramona's exes (including Chris Evans and Brandon Routh) look like they're having a blast chewing up scenery.

The whole of Scott Pilgrim vs. The World isn't really greater than the sum of its parts, but that doesn't stop it from being a damn entertaining piece of work anyway. It's definitely the closest any film has gotten to nailing the video-game aesthetic, but I get the feeling that if someone tried any harder, the whole thing would just collapse under the weight of a million badly CG'd sprites. Still, some of the mechanics need to be worked out before Scott Pilgrim II: A Winner Is You gets made.

MINORITY REPORT: I don't understand all this blipperty-bloop music and flashy lights. What is this, some kind of hypnotism device? I know what I'm hearing, I don't need you to spell it out for me. Damn kids and your vidjer games and funny papers. -an actual adult