Edge of Tomorrow; The Fault in Our Stars

The Fault in Our Stars

EXPECTATIONS: Up until a week ago, I was convinced that The Fault in Our Stars was actually that ABC Family show about a young woman who finds out she has cancer and bravely tries to live her life in spite of it. In my tiny little echo chamber of superheroes, video games and talking animals, you can understand how I might conflate the two. At any rate, early word is that this film is worth every box of tissues I'm going to use up crying my eyes out. That's cool. I haven't sobbed in a movie theater since Labor Day.

REALITY: There's no real way to talk about The Fault in Our Stars that doesn't take into account what a phenomenon John Green's book has become. It's so massively popular among readers young and old that it sort of makes sense for Fox to plunk the film adaptation down right in the middle of superhero season. It's a canny bit of counter-programming that should pay off big time, as The Fault in Our Stars takes a generic teen romance and elevates it with a pair of remarkable performances.

We first meet Hazel Grace Lancaster (Shailene Woodley) reluctantly attending a support group for teens living with cancer. Even though hers is in remission, Hazel must wear a breathing tube and cart around an oxygen tank everywhere she goes. At the next session, she meets Augustus (Ansel Elgort, last seen playing Woodley's brother in Divergent), a dashing, upbeat dorkwad who lost his right leg to cancer. Augustus immediately starts courting Hazel, who is wary of his advances, but the two quickly bond over their shared interest in a novel about living with the disease. Their romance blooms as the two make plans to travel to Amsterdam and meet the book's author (Willem Dafoe, who apparently thinks he's in another Spider-Man movie). 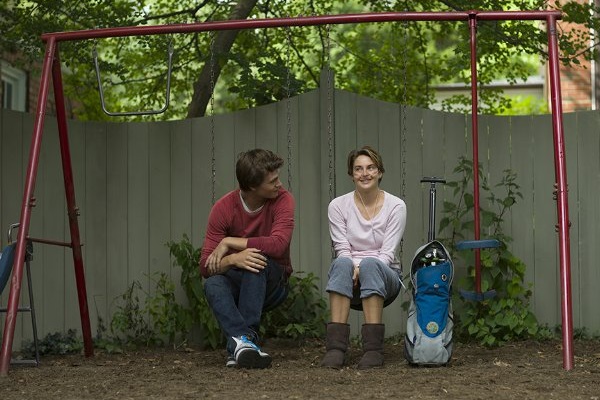 Can you help me with my metaphorical baggage?


The specter of inevitability hangs over the entire film, as everyone waits for that other shoe to finally drop. Gus, Hazel, Hazel's parents, viewers familiar with the book and even those that aren't; everyone can see a bleak ending in sight for these characters. It's not spoiling anything to say that that moment arrives, but when it does, the film wisely downplays the emotional agony to keep the focus squarely on the characters themselves. For a story about people with little time left, the pace the film maintains is slow and deliberate. Hazel and Gus may not be long for this world, but director Josh Boone gives them all the time in the world to tell their story.

In the meantime, the screenplay itself hinges on the contradictory outlooks of these two people. While Hazel sees her cancer as a death sentence, a one-way ticket on the express train to oblivion, Gus tells us that's the very thing he's afraid of. He views his affliction as a chance to spread good vibes and be the charming ladies' man he presumably never was before he lost his leg. The two share their experiences with cancer, and the screenplay does not mince words about the nature of life and death. In the kind of hamfisted narration that only exists to preserve the book's prose, Hazel tells us, "This is the truth. Sorry."

As immediate as the script and book may be, the film would be nowhere without its two leads. Shailene Woodley brings a shot of harsh reality to her character. Hazel is quick-witted and more than a little bitter about her situation. Her stares cut right through all the euphemisms and sugarcoating thrown at her. Simply put, if she were this good in Divergent, people might actually remember Divergent. Ansel Elgort, on the other hand, plays Gus like a consummate ham. He mugs, preens and spins every line like he wrote it himself. For that, he deserves all the credit in the world. He takes a character written like a one man wrecking crew of obnoxious platitudes and spins Gus into someone almost worth caring about.

If there's one place where The Fault in Our Stars falls flat, it's in its portrayal of any other character that isn't Hazel or Gus. When Hazel meets Willem Dafoe's character, she immediately asks him what happens after his book's abrupt, mid-sentence ending. She wants to know that there's more to the story after the main character's death, something she ponders throughout the film. This is kind of a clunky metaphor for people moving on after the loss of a loved one. The question nags at her so constantly that it forces her to ask her parents (Laura Dern, Sam Trammell) point blank what they plan to do after she dies. It's a scene that would be powerful if we knew anything at all about her parents. They're so thinly etched into the margins of this movie that they barely register as anything more than props. 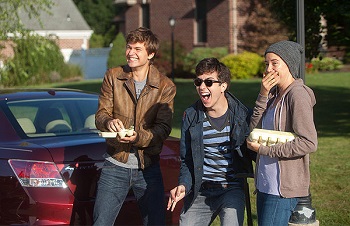 And that purpose is apparently egging a car.This also extends to Hazel and Gus' friend Isaac (Nat Wolff). When we first meet Isaac, he's just lost an eye to retinal cancer and says he's about to lose the other. Then he disappears for most of the film, showing up near the end as a happy-go-lucky blind kid without a care in the world. I want to care about Isaac, because his is a heartbreaking journey all on its own, but the film treats him the same way every couple treats a third wheel. It completely ignores him until it decides he finally has a purpose.

The Fault in Our Stars would probably be a hit with or without two great performances anchoring an otherwise generic story. The script might induce some serious eye-rolling to anyone who's already graduated high school, but I suppose that's part of the deal when you're telling a story about teenagers. This is a film where putting a cigarette in your mouth and never lighting it counts as a metaphor, and then addressing the fact counts as one too. It's a metaphor. For what? I don't know, it's just a metaphor.

MINORITY REPORT: Teenage girls with oxygen machines are one more iteration away from being a bona fide trope. Cross your fingers. - Sean "Keanu Grieves" Hanson