EXPECTATIONS: I'm tentatively excited about this one. They seem keen to move away from the Jurassic Park-lite of Roland Emmerich's 1998 effort and towards the giant monster-on-giant monster carnage that typified the original Toho Godzilla movies. If it doesn't work out, at least we have Pacific Rim.

REALITY: ...and thank God we have Pacific Rim, because Godzilla resides in the exact same miserable, no-fun-allowed wasteland that Man of Steel hails from. The lessons of the day are simple: all of human endeavour is meaningless and no matter what you do, nature will rebalance itself at your expense. Great. If there's one thing we needed more of in our Hollywood blockbusters it's crippling, depressing nihilism. If the original Gojira was Japan's response to Hiroshima, then this Godzilla is another in America's long line of increasingly negative responses to 9/11. 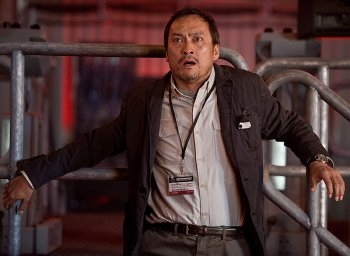 And that expression never leaves his face.Recounting the plot of Godzilla almost seems impossible, but there are people on the screen and they perform various actions that could almost be described as a plot if "filler" wasn't a word that already existed. Fifteen years in the past, Joe Brody (Bryan Cranston), an American nuclear engineer working in Japan, encounters a seismic anomaly that causes a meltdown at his plant. Flash-forward fifteen years and Brody's adult son Ford (Aaron Taylor-Johnson) is a U.S. Army bomb specialist called to Japan to bail his dad out of jail. While there, the source of the meltdown causing seismic activity is revealed: Muto, a giant, insect-like creature that feeds on radioactivity, and he's heading to Nevada to find his mate. The solution comes in the form of a creature that Japanese scientist Dr. Serizawa (Ken Watanabe) calls Godzilla: an ancient dinosaur monster that fights other monsters.

If I had to describe this laboured introduction to the titular beastie, I would call it "desperate." There's really no need to bury your giant monster movie in all of this completely unrelated human drama. The Godzilla tale should have been intertwined with the human narrative, like the aliens being born from the lead character's central dilemma in Skyline, or to give a more popular example, the shark in Jaws being born from its lead character's attempts to fall into his new lifestyle. In Godzilla, the monsters are a manifestation of a paranoid man's need for vindication and their manifestation only comes about upon the moment of his death. For all intents and purposes, Joe Brody and Godzilla are the same character.

What does Godzilla eat?


But, does this Godzilla movie really need a lengthy prologue where Bryan Cranston runs around in a bad wig passing the torch of his paranoid delusions to his bland leading-man son only to have him watch from the sidelines as his probably resurrected dinosaur form fights two giant insects? That's a rhetorical question, obviously. Godzilla himself only appears in this movie because a perpetually anxious-looking Ken Watanabe says so, and only then in the context of a discussion with a grieving son. The title character is not given an intense, cinematic introduction like the two Mutos are and barely registers as a character beyond the frequent hints of him being a reincarnated Cranston.

Godzilla is like the Funny Games of the Kaiju genre, constantly refusing to deliver what it thinks its audience wants to see. Most of the instances of built up monster-mash carnage are interrupted and forgotten about. Godzilla and Muto square off, we cut away to something else and then those situations are resolved off-screen. It is not until the third act that we start to see Godzilla performing in any real capacity and by then we just haven't seen enough of him to empathise with his struggle or to fully understand Aaron Taylor-Johnson's supposed spiritual connection with the big fella, who he gazes at like a child worshipping his dad 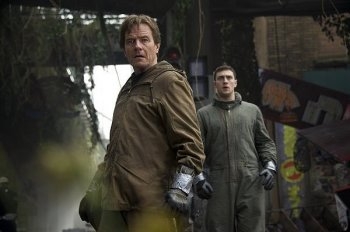 Son, if I die, I promise I'll come back as a dinosaur.

The actual elements of human endeavour as presented in this film amount to the American military, led by Admiral Stenz (David Strathairn), priming and delivering a nuclear bomb to the Mutos and then changing their mind and going back to dispose of it again so they can let Godzilla, the supposed force of balance in nature, beat the monsters himself. Our bland leading man essentially provides us with little more than an on-the-ground POV through which to catch glimpses of Godzilla doing his thing. Nothing anybody does in this movie makes any difference and this is brought home when you have Ken Watanabe implore David Strathairn to simply let the monsters fight it out.

There's a bizarre running theme of problems in the world not mattering until the exact moment that the American military starts to take notice. This would read as satire, but the bizarre message that comes through is that the country is failing to connect to its masculinity because it has collective daddy issues. Put your faith in God(zilla) and the world will find balance. If this movie is to be believed, humanity is just trying way too hard.

Ultimately, Godzilla is just another movie for men with daddy issues. It's like The Lego Movie all over again, mistakenly reappropriating a cultural phenomenon or national mood for a need in all men to reconnect with a previous generation of men. Women are forgotten about in this movie; wives and children are there to be protected. The relationships men need to focus on are the broken ones with their reincarnated dinosaur dads.

MINORITY REPORTS: This is the Godzilla Ian was expecting. Just throwing that out there. - Sean "Keanu Grieves" Hanson

It doesn't really make sense to use the Jaws approach of building up Godzilla after a sixty year string of Godzilla movies. That makes me think this one is meant for children who've never seen Godzilla before, which seems insane considering the movie they actually made. - Joseph "Jay Dub" Wade