What an interesting batch of movies we have on offer this week. Firstly, we have the absolutely dire A Million Ways to Die in the West from talking dog cartoon man Seth MacFarlane. To follow that we have the really rather good Maleficent from visual effects artist turned first time director Robert Stromberg. For dessert, we have Chef, from huge blockbuster director Jon Favreau.

A Million Ways to Die in the West

EXPECTATIONS: At this point, it's become pretty clear that Seth MacFarlane is not so much a storyteller, but rather a canny producer constantly searching for a premise that will make bank. Even more so than his debut feature, Ted, A Million Ways to Die in the West looks like a sitcom pilot with $40 million shoved up its ass. Which is perfectly fine so long as the film is funny, but this one looks about as funny as that time I watched American Dad last week...

REALITY: It's been a while since I cheated on my Comedy 101 final, but I'm pretty sure the fifth or sixth rule of comedy is "For God's sake, don't make your film longer than ninety minutes." Granted, some comedies can get away with it, but only with good reason. Hot Fuzz gets by on being a parody of overblown cop movies. The Big Lebowski gets by on being a hard-boiled detective yarn in which the detective is a complete imbecile. To that end, A Million Ways to Die in the West is a sluggish, terminally unfunny comedy that never manages to reach that fever pitch it so desperately wants. It's a parody of westerns for people who have never seen a western.

This is already a joke from an actual Western movie.


The year is 1882, and in the nondescript Arizona town of Old Stump, sheep farmer Albert Stark (Seth MacFarlane) gets dumped by his girlfriend Louise (Amanda Seyfried), who calls him a meek, nice-guy nobody. Enter the stunning and deadly Anna (Charlize Theron), who arrives in town under dubious circumstances. When Albert rescues Anna from a barfight, the two strike up an odd friendship. Albert accidentally challenges Louise's new boyfriend Foy (a mustachioed Neil Patrick Harris) to a gunfight, and Anna agrees to train Albert how to shoot. They fall in love, and then famed outlaw Clinch Leatherwood (Liam Neeson) shows up to wreck everybody's good time. It turns out Anna is Clinch's wife, but the movie tells us this way in advance, which generates all sorts of phony tension between her and Albert.

If you're wondering why I'm playing so coy with the plot of a comedy, it's because there's not much of a plot to speak of here. Then again, there doesn't really need to be. Million Ways is the story of people who hate living in The West explaining to each other all of the terrible things that can happen in The West. Presumably everyone living there already knows this stuff, but since this is a comedy for people living in Future World, MacFarlane constantly explains the identity and context of everything going on around him. He'll crack a lame joke, walk off screen, and then saunter back into the frame long enough to announce that what he just said was a joke. It's hi-larious. 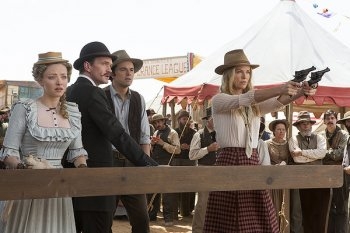 Is it funny yet?It's tempting to compare Million Ways to Mel Brooks' Blazing Saddles, since that's the only funny western anyone has ever made, but they're not really even playing the same game. While Blazing Saddles pokes a thousand holes in the racism inherent to the genre, Million Ways' premise is that anything and everything in the Wild West is liable to kill you. This is the thinnest concept imaginable, as the film's idea of The West is a desert wonderland of sweeping vistas and picture perfect landscapes where literally nobody lives. One gets the impression that if MacFarlane weren't beholden to the studio to deliver a comedy, he might have just filled these two hours with helicopter shots of Monument Valley. It would've made for a better film, honestly.

Million Ways finds Seth MacFarlane revealing his final magic trick. For all his arguable talent in the fields of animation, comedy writing, voice acting, film directing and lounge singing, Seth MacFarlane is a painfully uncharismatic leading man. His beady-eyed, thousand yard stare at everyone he talks to is distracting enough, but when the film asks him to emote in front of so many award-winning performers, the whole thing becomes laughable. And not in the good way.

Then again, that may be why MacFarlane cast himself as the film's own Grim Reaper. Anytime he points out someone doing anything vaguely interesting, that person keels over dead. People eating spicy foods die from their own farts. People using technology die from explosions. Every single gun owner eventually winds up getting shot. But not too often, of course. No, we wouldn't want to run one of the film's only two jokes into the ground. That would be ridiculous.

Liam, come on! It's just getting silly now.


For a film titled A Million Ways to Die in the West, we only ever seen fifteen people die, and half of them get shot. MacFarlane lays out his premise that The West kills people, and then promptly forgets about it so he can play out the "nice guy gets the dream girl" fantasy that's become so publicly toxic as of late. And when Albert isn't busy denigrating himself in front of Anna, we follow his friend Edward (Giovanni Ribisi), an equally meek Christian man constantly trying to convince his prostitute girlfriend (Sarah Silverman) that they should stop saving themselves for marriage and get it on already. That's kind of funny once, but the film keeps trying to mine that situation for gold and always comes up empty. Get it? Because people mined for gold in the West. And a lot of them never found any. It's a joke. (See, Seth? That doesn't work.)

It really bears repeating: Million Ways is essentially a pilot for a CBS sitcom. The humor is just a step or two removed from the same crap you'll find on any Chuck Lorre show, and it's just about as broadly cute-but-racist. The only difference is that we actually see the bodily fluids and sheep dicks instead of characters ad-libbing G-rated euphemisms for them. If it somehow took you two hours to read this review, then congratulations, you have now seen A Million Ways to Die in the West.

MINORITY REPORT: MacFarlane's comedic and cinematic style seems to be transplanted from another time. It's incredibly old-fashioned vaudeville silliness full of mugging to the camera and wacky exits. He wants to be Bob Hope in a time when nobody cares about Bob Hope. - Ian "Professor Clumsy" Maddison