With the summer movie season in full swing, these things are dropping into theaters like crazy. As a result, this might be one of the most bipolar weeks in Current Releases history. First up, Joseph "Jay Dub" Wade looks at the Seth Rogen/Zac Efron bro-fest Neighbors. Then, Sean "Keanu Grieves" Hanson takes us through the found footage horror of The Sacrament. Finally, Joe returns for all the talking animals and talking candy he can stomach with Legends of Oz: Dorothy's Return.

EXPECTATIONS: Neighbors should have been the sequel to Knocked Up. No offense to Judd Apatow, his wife and their kids, but forcing Seth Rogen to become a responsible adult will always be funnier than watching Paul Rudd drag his feet and complain about being Paul Rudd. Throw in one of my favorite working actresses and two young actors who are much funnier than people give them credit for, and Neighbors looks very promising indeed.

REALITY: Even though Nick Stoller's follow-up to The Five-Year Engagement advertises itself as a film about reckless youth versus responsible adulthood, there is actually a more cunning game being played here. Neighbors suggests that there are two types of people in the world: The Haves and the Have-Nots. More specifically, it's about people who have no social life whatsoever sniping away at those that do. That alone makes this a far more relatable film than it might initially appear.

Mac (Seth Rogen) and Kelly (Rose Byrne) are your typical suburban middle-class couple. Mac is an office drone in some faceless tech company, and Kelly is a stay-at-home mom who is bored out of her mind with their newborn baby. When the Delta Psi fraternity moves into the house next door, Mac and Kelly try to scheme their way into the good graces of frat president Teddy (Zac Efron) and VP Pete (Dave Franco). The frat's parties soon get too loud, and the couple worry it'll disturb their baby. When Teddy won't return Mac's calls, Mac decides to call the police. Teddy sees this as a betrayal, at which point the gloves come off and both sides attack each other until one relents. 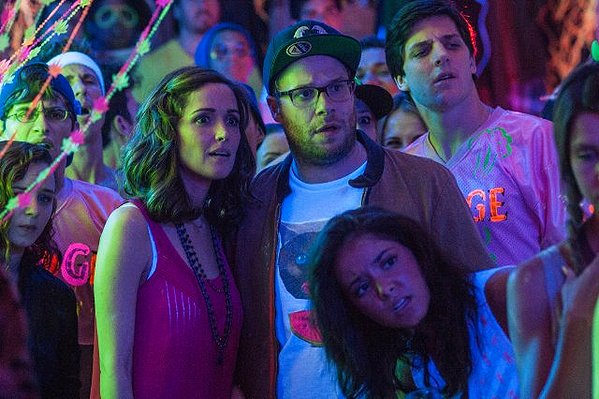 
What the trailers and commercials have been touting as an ever-escalating series of pranks is actually a film about a couple of one-time party animals desperate to recapture their youth. When Teddy initially invites Mac and Kelly into the frat house for the grand tour, the couple dive right into the giant bag of mushrooms they're offered, all the while knowing that home is just a few feet away so long as they have their baby monitor handy.

A little hedonism every now and then is perfectly fine, says the movie. The baby isn't going anywhere, and in a fairly sly move, the film largely keeps the baby out of the picture. Look, I have nothing against babies. Hell, I used to be one. (Happy Mother's Day, by the way.) Bringing a baby into this kind of conflict would be a bit of a downer. The fact that Mac and Kelly's baby remains largely unseen for most of the film helps reinforce this notion that, even though they're fighting for the baby's sake, this is really about their own fear of being seen as adults.

Then we meet Mac and Kelly's friend Paula (Carla Gallo), who has apparently never stopped doing the party/club/rave thing, and we see the path that lifestyle leads to. Couple that with Paula's ex-husband Jimmy (Ike Barinholtz), who is all too eager to join in on Mac's schemes just for something to do, and a picture begins to emerge: These four adults have nothing better to do with their lives than to pretend to be young and hate themselves for it.

Seth Rogen and Rose Byrne have a great chemistry together. It doesn't take much to buy the two as new parents, but where the film really excels is in portraying the two as partners in crime. Kelly is just as game for scheming and shenanigans as Mac, and watching the two pull of their ridiculous plans is half the fun of the movie. Though the fraternity guys don't exactly get short shrift either. Christopher Mintz-Plasse and Jerrod Carmichael round out the cast of jerkass fratboys, and both make the most of their few short scenes. 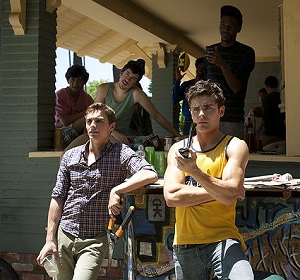 Their stability vexes me. I must investigate.Eventually, we realize that Teddy's mission to fuck with Mac and Kelly is rooted in his own fear of becoming like them someday. He sweats just thinking about leaving college, and Zac Efron does a nice job of letting us relate to Teddy even though he is a complete and utter dickbag. In fact, his fear is so obvious that it's pointed out by a character who says he knows this stuff because he has a minor in psychology. It doesn't take much digging to get to the heart of these characters, and the film knows it. That's why, for the most part, it sticks to its guns and makes with the outrageous sight gags.

If there's any pitfall to a comedy like this, it's that too many scenes rely on comedy through repetition. One scene, in which the frat hosts a Robert De Niro party, pretty quickly degenerates into everyone aping the same De Niro lines over and over. Later, Teddy and Pete rattle off an endless string of rhymes related to "bros before hos." I understand the impulse to throw as many great improvised lines into the movie as you can, but once that train gets rolling it's hard to stop. It's funny until it isn't, and Neighbors seems to have a knack for playing its jokes just a little too long.