It's time for more superheroes in the multiplex again, this time it's the return of the X-Men in the new sequel/prequel/alternate-reality X-Men: Days of Future Past, which greatly pleases Joseph "Jay Dub" Wade. Meanwhile, Martin R. "Vargo" Schneider wraps up the whole Adam Sandler conundrum once and for all with Blended and Jay Dub returns to take a swing at Million Dollar Arm.

X-Men: Days of Future Past

EXPECTATIONS: Okay, so is this a sequel to X-Men: First Class or is it another, different prequel to the original X-Men trilogy? Or is it a completely new Wolverine spinoff that just happens to star a bunch of other X-Men characters for no real reason? Wait, it's all of those things? How the hell does that work? While we're at it, let's just make Days of Future Past a sequel to all the other Marvel movies not owned by Disney. I always wanted Ghost Rider: Spirit of Vengeance, Punisher: War Zone and X-Men Origins: Wolverine to be part of the same canon of oddly subtitled comic book movies. 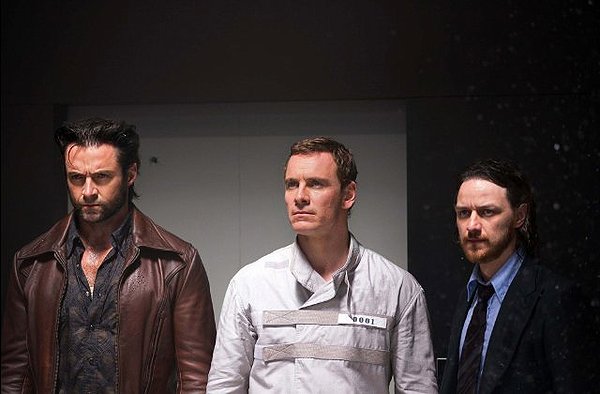 Of course, if this movie were actually made in the seventies, it would be a much more straightforward crime thriller


REALITY: For the past decade or so, the X-Men series has been single-handedly propped up on Hugh Jackman's increasingly sturdy shoulders. The franchise gets a little shakier when it comes to things like narrative consistency or having anything for half its characters to do, but Jackman has always been there to anchor the series. That's part of what makes the latest installment, Days of Future Past, such a pleasant surprise. Juggling two separate casts between two timelines and about six million individual plot points, the fact that Bryan Singer's return to the X-series makes any sense at all is something of a minor miracle.

The story opens on a future hellscape in which mutants are hunted down by robotic Sentinels that all look like that giant metal thing from the end of Thor. Professor Xavier (Patrick Stewart) and Magneto (Ian McKellan) hole up in a remote Chinese temple with the few remaining X-Men (read: most of the X3 cast plus a few new weirdos) to carry out a final desperate mission: Kitty Pryde (Ellen Page) somehow uses her power of walking through walls to send Wolverine (Hugh Jackman) back in time to 1973. There, he must reunite young Xavier (James McAvoy) and young Magneto (Michael Fassbender) to stop Mystique (Jennifer Lawrence) from assassinating Sentinel inventor Bolivar Trask (Peter Dinklage), whose death brings about the future Sentinel holocaust. 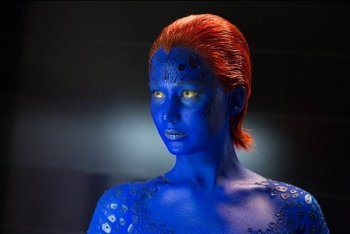 Blue Jennifer Lawrence gets to do more here than in the entirety of Catching Fire.The film cuts back and forth between these two periods, as the X-Men fight to protect Wolverine's unconscious body while his brain has a thrilling adventure in Nixonland. Along the way, we learn what's become of the First Class characters in the years since the Cuban Missile Crisis. Specifically, Xavier lost all his students to the Vietnam draft and has locked himself in his mansion to wallow in self-loathing and drug abuse. Meanwhile, Magneto is busy chilling in a plastic prison cell for assassinating President Kennedy. Suffice it to say, the First Class timeline isn't exactly a walk in the park, either.

But what begins as a Marvel-style remake of Terminator 2 quickly gives way to a considerably somber tale of actions and their consequences (okay, so it's still T2). When Wolverine and friends converge on the Paris Peace Accords to thwart Mystique's assassination attempt, things quickly go from bad to worse as Magneto's rash judgement winds up putting the 'mutant threat' all over the six o'clock news. Our heroes' salvation comes not from thrown punches or slain enemies, but from knowing when to admit that a problem exists. Coincidentally, the first step on this journey comes when Xavier agrees to stop shooting mutant cure serum like it's heroin.

This comes as a breath of fresh air in a franchise which, up to this point, has been content to let Wolverine cut gaping holes through any problem it can throw at him. That's mostly due to Days of Future Past being much more of a First Class sequel than anything else. For once, Wolverine exists as the dump truck of exposition while all the smart characters struggle to solve the problem. The dynamic between Xavier and Magneto finds the two competing to achieve the same result through different means. While McAvoy's Xavier attempts to negotiate peace, Fassbender's Magneto prefers sabotage and active threats to prevent mutant persecution. 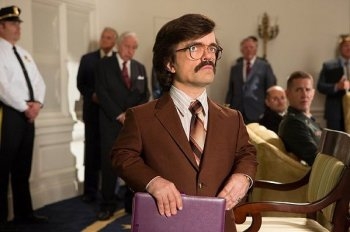 We all think you should keep the mustache, Pete.To that end, Days of Future Past is littered with crazy narrative gymnastics that a lesser script might have completely bungled. For instance, at one point young Xavier must convince himself that his own future is worth saving. Instead of just letting Wolverine do all the talking (since he presumably knows all this stuff), Xavier looks into Wolverine's memories and sees a vision of his future self. Then, young and old Xavier have a conversation inside Wolverine's head about their collective need for hope. Later, old Xavier informs old Magneto that their plan is working because his younger self just paid him a visit, though he neglects to mention that all of this just happened fifty years ago in the mind of the unconscious man lying right next to them. This whole thing sounds needlessly complicated, but the entire exchange lasts maybe a minute, without a trace of ironic silliness.

And yet, there's still plenty of room in this film for silliness. The single best action sequence finds a young mutant named Quicksilver (Evan Peters) racing around a group of armed guards as they attempt to kill Xavier and Magneto. He moves so fast that he casually changes the trajectory of bullets and gives guards wedgies before anyone has a chance to blink. All the while, he's listening to Jim Croce's "Time in a Bottle," a song I assume was all the rage with kids in 1973. At any rate, it's a huge improvement over Nightcrawler's opening scene in X2, which has not aged particularly well.

Quicksilver leaves the film far too soon, as the big finale could have used a little bit more fun. Things grow dire as the film cuts between young Magneto's attack on the White House and old Magneto's defense of the temple. The final act has an interesting symmetry to it, though; between two massacres, we see how potential violence in the present all but guarantees more violence in the future. From a franchise whose flagship character is a walking knife that loves to stab, that's practically a rallying cry for world peace.

MINORITY REPORTS: I think the most effective thing about X-Men: Days of Future Past is that the entire story hinges on older people hoping that their younger selves are able to make morally correct choices before they feel capable of it. It's the kind of narrative hinge you can only exploit with a time travel story and it works very well here. - Ian "Professor Clumsy" Maddison

"Eh, what's that? You want to let the girl go back in time? Nah, nah, we can't do that! Everybody knows women can't be time travellers on accounta their uhh... y'know, their period cycles. Yeah, ladies go through time and their bodies get all de-synched and it's just a mess, you gotta just send Wolverine, leave the phasey-girl at home, it's for her own good. We put that in a movie, girls are gonna try time travelling themselves, and that's dangerous." - Harold Gorman, Hollywood Foreman, reviewing an early draft of this script