Believe it or not, movies actually seem to be getting better. Maybe there's something in the popcorn making us all dumber and more accepting of comedy and cartoon sequels. Or it could be that the people working at Hollywood Industries are finally getting their shit together. At any rate, it's a pretty good week here at the Current Releases office. Martin R. "Vargo" Schneider finds plenty to enjoy about 22 Jump Street, Joseph "Jay Dub" Wade can't seem to get enough of the animals in How to Train Your Dragon 2, and Sean "Keanu Grieves" Hanson details the false advertising of Hellion.

EXPECTATIONS: How many great movies do you have to make before you turn "better than it has any right to be" into "exactly as good as we expect?" Phil Lord and Chris Miller have made their careers out of spinning gold from low expectations, between the Cloudy With A Chance of Meatballs franchise, The Lego Movie, and now the Jump Street movies. I feel like we should be elevating them to "Great Filmmaker" status by now.

However, we are dealing with the incredibly tricky situation of "comedy sequel", which always seem to fall into the trap of "Hey remember how this was funny in the first movie? Well, it will be funny again THREE TIMES OVER." I trust Lord/Miller are very aware of that and will probably subvert it, but this could easily be a case of "it's okay because we're doing it IRONICALLY," which is almost as bad. 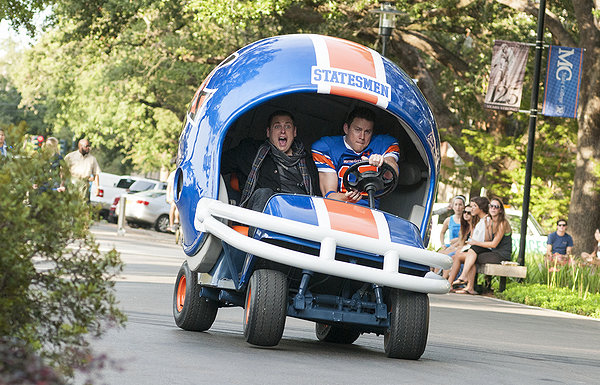 
REALITY: The original 21 Jump Street was an incredibly smart film which didn't simply stop at self-referential humor, but instead told a story about two men who are having trouble accepting that the world is different from when they were growing up. Channing Tatum's character Jenko has to accept that over the past few years caring about things, being aware of others, and being a decent person has become cool, and racial or sexual slurs are not just inherently funny things to say. Instead of throwing a temper tantrum about it and posting threads on the internet about things which he could easily just ignore, though, Jenko learns to adjust and grow as a person. Like a grown-ass man should do.

This character growth appears a few times in 22, but is more content to wink and chuckle at the audience. 22 Jump Street is the Get Him to the Greek to 21 Jump Street's Forgetting Sarah Marshall. (Follow me on that one?) 21 is the better all-around film, and it is more interesting thematically, but the rapid-fire joke-to-laugh ratio in 22 is basically unstoppable.

Encouraged by the chief (Ice Cube) to "do the same thing as last time, but with a bigger budget", Jenko and Schmidt (Jonah Hill) enter college to infiltrate the dealers of a new drug. This time Jenko is allowed to embrace his inner jock, and makes friends with the football bros, while Schmidt falls in with the bohemian art students. While being determined to make the same moves as last time, the two of them have a falling out, and the power couple goes through a breakup. 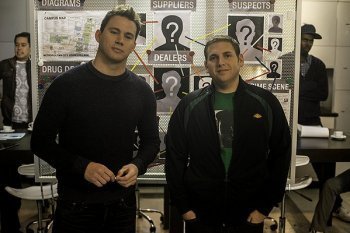 Applying what we learned in a real world situation!Okay, not a lot of work needed to be put into the storyline, but that doesn't matter because the script is devoted to throwing out as many gags as possible and almost all of them hit perfectly. Playing off the natural chemistry and friendship between Hill and Tatum, the film's best moments come when the boys are allowed to give each other shit, like actual friends/brothers/partners would do. (Particularly amazing is the reaction Jenko has to a sudden realization regarding Schmidt's new girlfriend.) Tatum's natural athleticism and its contrast against Hill's natural resemblance to the Pillsbury doughboy is a pretty significant plot point, but none of it ever seems mean-spirited. The franchise is based around two men's mutual respect, and as is often the case with friends, that respect is shown by just saying horrible things to each other.

With their newly-increased budget, Lord and Miller are allowed to grow their abilities as directors, putting together legitimately great action scenes, not just "good for a comedy movie." I know that the world has been pushing Channing Tatum as an action star for years, but between this and White House Down (which gets a nod in this movie), it seems like the only time he's ever comfortable in this role is when it's played intentionally way over-the-top. Like I said of Tom Cruise last week, he has embraced the inherent silliness of being Channing Tatum. (Seriously, though, Channing Tatum is just unfair. Legally, you shouldn't be allowed to be that charming, that good-looking, that athletic, AND that funny. I am personally amazed every time a woman chooses to have sex with a man who isn't Channing Tatum.) This perfect comfort zone allows Lord/Miller to experiment with different action tropes, including helicopter jumps, parkour leaps, and climbing on top of a semi truck. Unlike most action comedies with emphasis on the latter word, 22 Jump Street is actually visceral and exciting in its action, comparable to Lethal Weapon or Bad Boys, or even next to Hot Fuzz in the ranks of "genre parody which is also a great entry in that genre."

Although it relies heavily on ironic nudges and winks from the first film, as well as making fun of the comedy sequel itself, it doesn't change the fact that 22 Jump Street is one of the funniest films I've seen all year, especially in the latter half when the film hits its stride. The best part of the film is that it is unashamed to be earnest, and its love of the playful banter between its two leads. The Jump Street franchise is a fun look at male friendships, and also send the message that you can be a manchild, but you don't have to be an immature one.

MINORITY REPORT: Look at Jenko learning from his mistakes and growing up. Haha. He's trying! - The Internet