EXPECTATIONS: What is this crap? "Sorry we ran out of real movies this week, Marty, but here, have this direct-to-video hellhole." I feel like God is punishing me. Or maybe just Ian. Either way, I want it known that this is bullshit! Alright, you know what? I'm not gonna let you guys beat me. I'm reviewing this like it's just another movie. I'm going to give this movie the same benefit of the doubt I would lend to all late-night sex coms with no budget hidden in Netflix Instant Watch ... Seriously, what did I do?

Of course not. That's why we've got one. The first thing I noticed about MILF is that it's made by Asylum Films, the guys who are known for making those knockoffs of major films that once lined the halls of your local Blockbuster, back when such a thing existed. This confuses me. It's one thing to make Snakes on a Train or that version of Sherlock Holmes where they fight a dinosaur, but a low-budget version of a high school comedy is just ... a high-school comedy. As a side note, how desperate do you have to be to take a part in an Asylum Film? I realize that money's money, and that it's hard to make it as an actor, but what kind of career stress do you have to be under to start convincing yourself that adding TransMORPHERS: Fall of Man to your resume will do more good than harm? 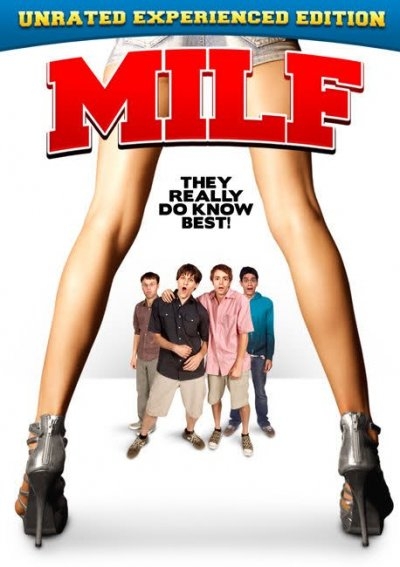 Just the poster. You try finding work safe images from this film.MILF follows four nerdy college guys who are having trouble meeting girls in their classes, because they are horrible people with no personality between them. Granted, the film wants you to believe it's because college girls are whores who only sleep with frat house bros, but make no mistake, it's because Brandon (Ordinarily I'd put the actor's name here, but who cares?) , Anthony, Nate, and Ross are just awful. Right off the bat we establish that Anthony wants to sleep with Brandon's mom, even though they've been friends their entire lives. This becomes more understandable and a little more disturbing when we see Brandon's mom and realize the only way she could have a college-age son is if she popped him out at age nine. After striking out at a party one night, the boys drive home to find Brandon's mom and Anthony's mom in a lesbian BDSM tryst because, hey, why not? Somehow during this scene, that is never addressed again; Anthony confesses that he's seen Brandon's mom naked and somehow this makes him indebted to his friend. Shortly afterward, Brandon starts up an affair with Anthony's recently divorced, apparently bisexual mother. Meanwhile, Nate and Ross, or "British Nerd" and "Undetermined Minority Nerd," start courting older women everywhere because they have some sort of bet going, and wow is this plot incredibly convoluted for a movie called MILF.

However, it does do a few things worth noting. All sex comedies put their protagonists in awkward sexual encounters, but very few have the balls to just have their characters go through with it. For example, there's a scene in Take Me Home Tonight where Dan Fogler's character starts to hook up with a woman he just met when her large, scary husband wants to join in. Fogler runs screaming of course, but when the same thing happens to British Nerd in this movie, he's hesitant at first, then says "Alright, I'll go with it." That is how committed these guys are to getting laid! I commend the film for that. When that is literally your character's only defining trait, you might as well just go hog wild with it.

The other point of note is the bizarre relationship between Anthony, Brandon, and Anthony's mom. Whether it was intentional or not, Anthony clearly has feelings for his friend that are more than Bro-mantic if you catch my drift. Their entire relationship in this film is defined by a conversation like this:

"Hey man, I saw your mom naked, and I'm sorry. That makes me your slave now."

However, Anthony also seems to want to have sex with his mom. Seriously, this film should have been called MOMILF, with the first two letters standing for "My Own." Several times throughout the film, he sees pictures of her, not realizing who she is and comments on the various crude things he'd like to do. Anthony is basically all kinds of messed up. I don't know that there's a word for what he has. Is there a word for something that's kinda like an Oedipus Complex, where you want to kill your father and sleep with your mother, except here the role of your father is being played by your best friend, who is also kinda your brother because your moms are hooking up, and in addition, you also want to have gay sex with your friendbrotherdad? No? Well, I can't imagine why not. Let's simplify here: When your movie contains a scene in which a character masturbates to a video of his best friend having sex with his mother while they both watch him do it, there are clearly some issues that need addressing.

The plot gets further incestuous with the big reveal at the end that Anthony has slept with Brandon's mom as well, because apparently all women over forty are sex-starved animals who don't care whether they've seen a man pee his pants at a birthday party. This is basically the same plot as Y Tu Mama Tambien, except somehow more homoerotic. That's right, this movie is gayer than a movie that ended with two dudes making out.

Am I expecting too much here? Does the Asylum's reputation for being bad make it immune to criticism? Perhaps, but this is honestly a little pathetic. It's like these guys wanted to make a legit movie for once, and they just didn't know how. Hell, a couple of scenes, basically anything with this actress, feel like they came from an actual movie that people, you know, watch. It's not that hard to do a teen sex comedy, Asylum. It should involve teens, it should involve sex, and it should involve comedy. Your movie has way too much of the second, and none at all of the first and third.

I just honestly can't understand what the motivation is for anyone to watch this movie. Even you're just looking for a T&A fest, why choose this one over the literally hundreds of funnier movies with better-looking women? If you are 12 years old and looking to see some big fake tits on Netflix Instant Watch, yes, this movie has those. But here's a word of advice, Spanky Jim. You're entering a very confusing time in your life sexually, and a movie like MILF could mess you up way more than it helps you. As a closing note, I wish I could give this movie points for the presence of breasts, but the only critic who can get away with that is Ebert, and he's earned that right, dammit.

MINORITY REPORT: Panda Jesus is mad at you for hating Soul Surfer; that's what you did. - Joseph "Jay Dub" Wade