EXPECTATIONS: My expectations for Thin Ice would be fairly low, except that the buzz surrounding the film includes the phrases "starring Greg Kinnear" and "it's kind of like Fargo." What better way to lament the passing of winter (hey, screw you guys, I like winter) than with a crime thriller featuring blotches of blood-stained snow and an actor who's looking more like Larry Hagman every day?

He's going to ask you to kidnap his wife.

REALITY: Somewhere along the way, I got the distinct impression that something horrible happened to Thin Ice before it found its way to my theater. Sure enough, a quick Google search revealed the film was originally titled The Convincer, and that it was intended to be a psychological thriller with a two-hour runtime. The 90-minute Thin Ice, on the other hand, is a fast-paced 'comedy' with an ending that treats its audience like a pack of blithering morons.

Mickey Prohaska (Greg Kinnear) is a fast-talking insurance salesman who's fallen on some hard times. Upon meeting a new client, the elderly and mentally aloof Gorvy (Alan Arkin), Mickey discovers that the man is in possession of an extremely valuable antique violin. While attempting to steal the violin, Mickey involves a local handiman (Billy Crudup) in the crime, which winds up getting a man killed. Desperate for a clean getaway, the two dump the body under a frozen lake and try to fence the violin before Gorvy notices it's missing.

Giving away any more of the plot would not only spoil any fun you might have, but would also reveal how pants-on-head stupid the final act of the film actually is. As the film wears on, it becomes clear that they have absolutely no clue how to resolve the situation, and so they toss in a number of "Gotcha!" moments in lightning succession, hoping you won't notice they just pulled a fast one.

To whomever told me this film was kind of like Fargo, I'd like to cordially invite you to hit yourself repeatedly with whatever blunt object might be handy, because you've clearly never seen Fargo. What separates the Coens' modern classic from Thin Ice is a strong sense of black humor, and knowing when and how to implement it. The entire first act of this film is light and chipper, seemingly trying to ape the tone of Little Miss Sunshine simply because it features two of the same actors. Any dark humor this film exudes comes across purely out of awkward timing and amusingly dour performances. Scenes cut themselves short right after a punchline, almost as though cutting to the next scene is supposed to tell us that we just witnessed a joke. It doesn't work that way, but the film tries like hell to make it happen time and again. 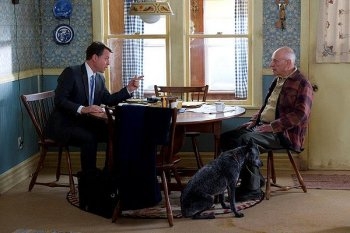 Hey, weren't you Edward Scissorhands?Also unlike Fargo is the film's third act wrap-up, in which the heist gets resolved, characters get everything they want, and everyone lives happily ever after except for that guy they killed. The film opens with a narration from Mickey, reminding you to "only believe half of what you see." This makes for sound advice, because the half of the film I don't believe is the bullshit reveal the film pulls near the end. It's a sub-Shyamalan plot twist that makes even less sense than Mickey's actual scheme. I don't believe someone is stupid enough to think we're stupid enough to buy an ending like this.

At least you'll find some interesting performances here. Kinnear is good as the bullshitter who's suddenly far out of his depth. The man switches from disarming sincerity to utter confusion with ease. Alan Arkin puts in a really oddball performance as Gorvy, playing him as naively scatterbrained. It seems, though, that he conveniently forgets and remembers things whenever the plot demands it. Billy Crudup is the real wild card in this film. He appears out of nowhere, and once he gets involved in Mickey's scheme, he's at times aggressive against him and at other times behaves like a child crying over spilled milk. It's an odd performance, to say the least, and it's a shame he exits the plot as abruptly as he enters it.

It's unknown whether the original cut of Thin Ice will ever see the light of day, but I'd be very interested to see it, if only to find out exactly which of the film's problems come from director Jill Sprecher and which come from the studio cutting the film to shit. While Thin Ice features some standout performances, it struggles with that most crucial part of any heist film: the heist.

MINORITY REPORT: Let's play a game called "Walk Down the Street and Ask People if They Know What this Movie is." Thin Ice loses at this game every time. - Ian "Professor Clumsy" Maddison