Beyond the infamy of Crete stood an island wrapped in brittle womb, sunken pillars no more nourishing than spoiled innards of the cow. Drizzled with "wow-sabi" cream.

Baked as born, cold and black, a twisted bread so wrapped in flesh distended from the souls of gluttonous bathers and thrust into the ichor of provolone, to wail and burn anew. It's "sauce-ome!" 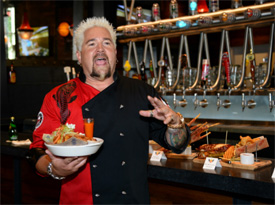 Who games, and dissipates his property, spitted and roasted slowly, a dismal chorus rends the air. Linger not or slip down into their pit and so among them drown in fetid lagoons of dying humors named by some Guy's blue-sabi sauce.

So Ovid, Plato and those denied witness to Christ's ascension at Calvary, inhabit a limbo of rock bread, lettuce and curdled milk to be tempered with the fresh-crushed liquor of a carrion worm and transported in a vessel of beetle-gnawed rind.