EXPECTATIONS: Last time I watched a movie about Friends With A Thing, I enjoyed it greatly. So I have high hopes for this one. That's right. I'm basing my expectations for this film off the performance of another, completely unrelated film with a similar title. Normally, you might say this is sort of like imagining Paris, Texas to be a fun '90s comedy because it should be similar to Happy, Texas, and I'd agree with you. However, this is a case where genre logic dictates that the two films will be just similar enough to sell tickets, so I feel justified. Now my greatest concern is replacing my Justin Timberlake man-crush with my Jon Hamm one.

REALITY: Why aren't there more female film directors? It's 2012. Doesn't this seem like something we should have? If I really wrack my brain, I can come up with about six before using Google, and the most famous one got her start through the advantage of nepotism. (You know, being Nicolas Cage's cousin and all.) Especially with romantic comedies, it seems to me that if you're making a movie aimed at a specific audience, it might help to have a member of that audience involved somehow. This is why most of the media targeted toward women is actually highly insulting to them. (Looking at you, Something Borrowed.) After writing/starring in the greatly overlooked Kissing Jessica Stein, Jennifer Westfeldt basically disappeared into TV guest appearance land for the past decade. Now she's come back to the indie comedy world with her writer/director/actor project Friends With Kids and she's leading the equal-opportunity charge by proving that men aren't the only ones who can be disappointingly mediocre.


Friends With Kids follows two perpetually single best friends, womanizing Jason (Adam Scott) and neurotic Julie (Westfeldt), whose successful pretty-people lives are thrown off course when their married couple friends Leslie and Alex (Maya Rudolph and Chris O'Dowd) announce their pregnancy. Four years later, they have two kids and another couple of friends, Ben and Missy (Jon Hamm and Kristen Wiig), have joined the suburbanite parental ranks, with devastating results on their relationship. After seeing their friends become tired and unhappy, Jason and Julie realize that they want kids, but don't want the difficulty that it takes on romance. Rather than realize that even having this thought makes them too selfish to be parents, they decide to produce a baby together, and switch off raising it and paying for it. One off-camera pregnancy later, and they're actually raising a kid, while each of them continues dating and looking for "The One." 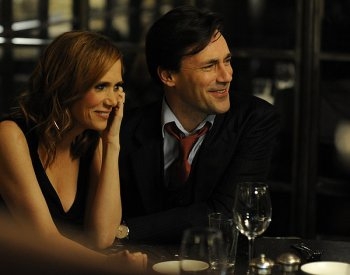 How do you pronounce Wiig anyway?There's a lot of good stuff here, so let's get it out of the way. The entire cast is fantastic, but the supporting roles especially shine. O'Dowd in particular is a scene-stealer; every line he delivers is pure gold. In one of the best decisions the script makes, we get some scenes exclusively with the back-up couples to flesh them out as characters, rather than focusing on the main two characters the entire film. This gives the added bonus of explaining why one couple survives with their children while the other does not: Leslie and Alex have a bond closer than the mainly physical one Ben and Missy share. Scott and Westfeldt are so good together, it endears you to characters who otherwise could have been unbearable. Even Megan Fox puts in a fine performance, though Unlikable Hot Girl is not exactly a difficult role.

Honestly, a great deal of this film is good. The first half is damn funny and charming and there's an amazing dinner table scene with the whole cast that is worth the price of admission. Jon Hamm, who plays a jerk better than anyone, mentions the elephant in the room and the whole theater is left awkwardly stunned. This lasts for about five seconds, until Adam Scott gets a monologue putting Hamm's character in his place, which is made twice as amazing when you realize a guy that's built like Adam Scott has no business telling off a guy who's built like Jon Hamm. However, once this highlight happens, you should try to beat the traffic home, because it'll spare you from what comes next.

Last week, Ian wrote a study on the possibility that formula and predictability can actually be great assets to a film, provided the movie is smart about it. As I've argued before, it's not a bad thing to tell a story that's been told already, because the interesting part is in the way you tell it. Originality is overrated, basically. However, the predictable ending of Friends With Kids is particularly painful, because of how long the movie spends avoiding it. (It's interesting that half this cast came from Bridesmaids, because that movie did the exact same thing.)

See, the miraculous (and slightly unbelievable) part of Jason and Julie's arrangement is that it actually works. However, when the feelings begin to change for one of them and the conflict grows, it actually looks like, for once, the characters won't get together. Each of them gets a chance to tell the other one "No," and I thought, for a brief moment, that the movie might end on an ambiguous note, another jump in time, with the two of them patching their friendship and working together for the kid, bound by the consequence of their action. In short, I thought it might have been interesting. Not the case. After teasing us with this possibility, the film switches straight into standard generic mode, and almost as if it's punching us in the head with how different it could have been, it ends on the least sweet and romantic line in movie history. Then it just ends. No followup at all. 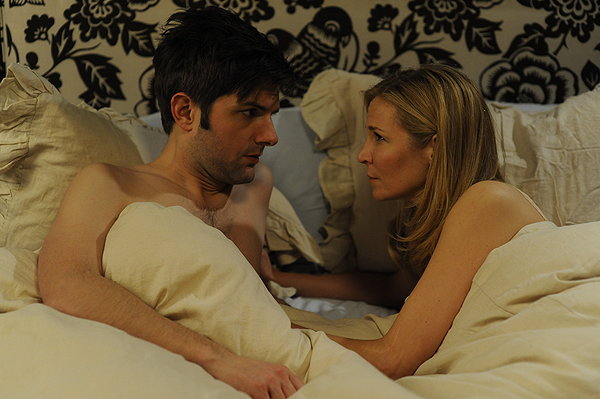 I find it hard to care for characters with such a huge bed and such white sheets.

Men and women can be friends, everyone. In fact, according to every girl I've ever dated, we can JUST be friends. But ever since Harry met Sally, we've perpetuated this lie that one person must inevitably fall in love with the other, and as people smarter than me have pointed out, this pervasive concept actually hurts people's real-life relationships. It's because of this idea that we have Internet Male Friend Zone syndrome, wherein young men can't accept that their female friends aren't attracted to them, and spend hours writing on Reddit about how girls only date jerks instead of seeking healthier relationships. Or showering.

I would have liked to see Jason and Julie's arrangement work out for them, because why not? Maybe instead of consoling each other around the bar (or, let's face it, the WoW server) saying "No, man, she'll totally love you someday, it'll be like When Harry Met Sally!" we could be saying, "Hey, she's not really into you, maybe you could meet someone else and have a healthy friendship like in Friends With Kids! Except, you know, don't have kids, because you can barely dress yourself!" It's a society of enablers, and we keep making films that add to it. This is an independent film, aren't they supposed to be better than that? This is what I hoped a female director would provide, adding a perspective that might prove cathartic for women who have to deal with Nice Guy Syndrome. Instead, we get an otherwise strong film that completely wastes what could have been.

MINORITY REPORT: I've heard that if you watch Bridesmaids forward and this film backward at the same time, a time warp opens up that dumps you straight into an episode of Mad Men. It's a tempting proposition. - Donovan Laird