EXPECTATIONS: When you work around movies as often as we do, you hear all kinds of trendy ideas that sound like they can't possibly be actual things. For example, did you know that there's actually an actor named Cam Gigandet? It's true! We live in a society that has allowed this to happen! But the most confusing of the "Wait, that's real?" phrases in the past ten years is the rise of the "mumblecore" movement. "What the hell is 'mumblecore'?" you're probably not asking. Well, according to this super-helpful Wikipedia article it's a movement of independent cinema that does certain things, except when it doesn't do those things. Essentially, they're movies about feelings, which is good, because no one in a movie ever felt any way about anything until about mid-2002.

Anyway, the two biggest names in mumblecore are probably the Duplass Brothers, Mark and Jay, who recently broke into the mainstream with two films we rather enjoyed. After being filmed in 2008, then placed on a shelf and not finished until now, The Do-Deca-Pentathalon is a return to the duo's sensitive, independent roots. This is fine, but given that I like what they're doing now, I'm a little concerned about what happens when they go back to what they did before. Seems kinda counter-productive, right?

REALITY: It turns out my instinct was correct, and when your career has literally just started, backward is not the way to go. It's as if the Duplass Brothers realized they were accidentally making films that a large amount of people would enjoy, and they couldn't let that happen.


The Do-Deca-Pentathalon starts with a simple and interesting premise: Estranged brothers Jeremy (Mark Kelly) and Mark (Steve Zissis) reunite after years of not speaking when Jeremy decides to crash his older brother's birthday weekend. The pair's natural competitive nature shows itself immediately, and within half a day, Jeremy has goaded Mark into a rematch of the titular Do-Deca-Pentathalon, a 25-event personal Olympics the two held as teenagers, with a still-undetermined victor. Not being anywhere near as physically fit as they once were, the two men attempt to keep this secret from their mother (Julie Vorus) and Mark's wife Stephanie (Jennifer Lafleur). Impressively, this doesn't work at all, and the ladies openly express their disapproval at the competition. 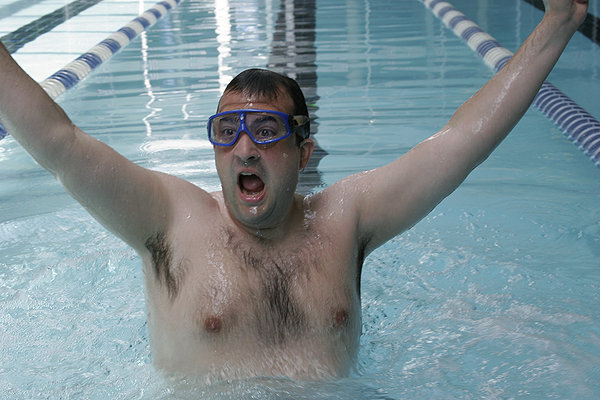 It's no surprise that this film was made four years ago, because everything about it feels like a "warm-up" for the better films that the brothers Duplass would make later. The relationship between Jeremy and Mark feels like someone trying very hard to write parts for Paul Rudd and Jason Segel and not quite achieving it. Zissis and Kelley are both fine actors, but at no point in time do they feel like brothers. For a genre that prides itself on naturalism, everything about it seems determined to remind you that these people aren't really as awkward as they're pretending to be. (Oh, they're awkward, but the awkwardness is greatly exaggerated.)

Part of this comes from this annoying thing the Duplass brothers do with their cameras where everything is badly shot on purpose, every zoom jarringly fast, everything designed to remind you how indie this movie is. It constantly feels like you're watching the movie through your cousin's Sony Handicam, because you basically are. I realize that these things I'm complaining about are part of the "fake realism" that the film is trying to achieve, but instead of making me feel like I'm next to these guys, it has the exact opposite effect. If you're going to make people hyper-aware that they're watching a movie, it should at least be an interesting one.

What's really bizarre about this phenomenon is that it somehow makes the more "traditional" parts of the movie seem over-the-top and a little wonderful. For example, the short scenes of Jeremy and Mark actually doing the Do-Deca are incredibly entertaining, but most of that credit goes to composer Julian Wass' intentionally overdone score. The only time the film actually manages to achieve realism is when it plays this bombastic Chariots of Fire-homage music over two shapeless guys playing air hockey. Why? Because I don't know about you, but I play air hockey like it is the most important goddamn thing in the history of the world. I HAVE that music playing in my head, along with John Madden in my brain providing color commentary. "Now, now what Marty's gonna want to do here is keep the puck out of his hole, and put it, this is important, he wants to hit it into Ian's hole. And BOOM! He did it!" For these scenes, we see the competition the way it is in these guys' imagination, and it's actually pretty great.

Other than the competition scenes and a few surprisingly sweet exchanges between Mark and Stephanie, this film struggles with its tone. It's too much like a movie to feel realistic, and it's too realistic to make for an entertaining movie. I've been known to ask why movie characters act like emotionally stunted morons instead of addressing their problems like people. Turns out that's because sometimes that's literally the only way to have an interesting conflict.

Watching Jeremy and his mother talk about his issues with his brother isn't nearly as interesting as watching them hash it out, but for some reason, we spend a lot of time on it, just sitting and talking about feelings. Cyrus did pretty much the same thing, but at least the conflicting parties were the ones talking. This whole idea, this whole film, just feels passive-aggressive. In fact, I'm sure it was. It's not really surprising that a pair of filmmaker brothers have twice dealt with brotherly issues. This time they even named a character after one of them! The reason this film feels home-made is that we're watching the filmmakers air out their fictional issues with each other. Except that they did it together, and they had to sign off on each other's vision. That's not even passive-aggressive, really. It's passive-passive, and there is nothing interesting or entertaining about that.