EXPECTATIONS: I always enjoy when this gig presents me with films I know nothing about. Here, I'm going in based on two names: Director Noah Baumbach and Writer/Star Greta Gerwig. I have a mixed history with indie darling Baumbach; I enjoyed Margot at the Wedding and Greenberg, but I found his breakthrough debut The Squid and the Whale absolutely tedious. However, I've been so interested in Gerwig since I discovered her in Damsels in Distress that I don't care who she's working with. So this should be fun! Or, rather, this should be confusing and dark and maybe boring! That's kinda like fun, right?

REALITY: While watching Frances Ha, I tried to keep a mental list of all the lines I heard that made me angry. I quickly realized it would be easier to provide a link to the IMDB quotes page. I rejoiced upon finding that this film has no IMDB quotesdelighted that I wouldn't have to suffer through lines like "this apartment is very aware of itself" and "do you know what Virginia Woolfe novel this reminds me of?" a second time. What this film does have is a trivia page, sporting this entry: "Director/co-writer Baumbach shot the movie in black and white to "boil it down to its barest bones" and create an immediate 'history' and 'a kind of instant nostalgia.'" If you read that and said "that's the most pretentious thing I've ever heard," you've got a pretty good feel for how this review is going to go. 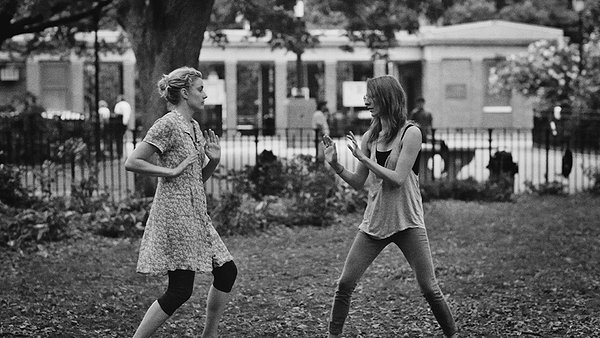 And you're telling me this isn't an action movie?


Frances Ha follows the titular Frances (Greta Gerwig), a self-righteous twenty-something who lives in Brooklyn with her best friend Sophie (Mickey Sumner). For those of you who don't know your hipster geography, Brooklyn is the Portland, Oregon of the East Coast. (Surprisingly, that distinction doesn't go to Portland, Maine, which isn't the anything of anywhere.) Frances and Sophie wander around having inane conversations and being oh-so-unique-and-charming, until Sophie decides to move out, sending Frances into desperate self-destructive turmoil as she ... wait, no. Nothing really happens. She crashes with some dudes for a bit, then she visits her folks, then crashes on another person's couch. This is 86 minutes of an unlikable person being awkward and selfish and annoying and then wondering why everyone else is more successful and happy than she is. This is what the TV show Girls would be like if it were written by people who hate the show Girls.

I'm not saying a film needs to be packed with action to be good. One of my most anticipated films of the year is the third in a series of movies where two people literally just walk around talking about stuff. But if you're going to make a film where the tensest moment is 90 seconds of your main character looking for an ATM (SPOILER ALERT: she finds one), there should at least be some interesting character development or clever dialogue. (SPOILER ALERT: there isn't any.)


Frances travels about for a bit, visiting her family in Sacramento (the Portland, Maine of California) and then pointlessly spending two days in Paris. The travel is done mainly in montage, which would be fine, except that the purpose of a montage is to show a great amount of change in a short amount of time. Your character is supposed to be different in some way at the end of a montage than they were at the beginning. Frances Ha has not one, but two montages in which Frances remains completely unchanged. Of course, Frances spends most of the film refusing to develop, so this shouldn't surprise me.

I'll give Baumbach this: The black-and-white cinematography allows him a handful of really interesting shots, especially considering this was basically guerilla filmmaking, shooting along the streets in public and hoping not to get noticed. But he relies so much on his "manufactured history" and "instant nostalgia" that he forgets to give us actual pathos for the character.

I don't care about Frances. She's selfish and annoying, and I don't want her to succeed. The movie pretty much demands this of me, though, because it decides to make Frances grow into a human being and kinda get her shit together in the last five minutes. It also undermines the entire film's theme of "woe is me, being in your twenties is so hard" when apparently all she has to do to be an adult is actually try. Maybe that's the message that I'm supposed to take from it, but by this point, I don't trust this film to give me any advice on life.

Frances Ha is basically every cliche there is about independent cinema wrapped into one hateable package, right down to the faux-Truffaut filming style. Frankly, it's a downright chore to watch. The most enjoyable scene comes when Sophie's boyfriend Patch finally loses it and yells at the girls. Patch, by the way, is the closest thing this film has to an antagonist, by virtue of the fact that he wears baseball caps and says "bro." Frances Ha is pointless navel-gazing drivel, and it seems to know it. Worse, it seems to revel in it.

MINORITY REPORT: Every word of this review tells me that Baumbach intentionally made a movie about Instagram and the people who use it, which is a pretty effective way of telling me I don't want to see this movie. - Joseph "Jay Dub" Wade