EXPECTATIONS: Last year's V/H/S, while far from perfect, yielded three great shorts: "Amateur Night," "Second Honeymoon" and "10/31/98," all of which expanded the parameters of found-footage horror and the anthology format. Hell, in the latter sketch, the directors even proved that indie filmmakers can produce convincing CGI - quite a feat after Birdemic. Unfortunately, it also included "Tape 56," "Tuesday the 17th" and "The Sick Thing That Happened to Emily When She Was Younger," which ranged from mediocre to terrible.

Even though a .500 average is nothing to write home when it comes to horror anthologies, I'm excited for V/H/S/2. With one fewer segment, the producers have the opportunity to be choosier, and while the best directors from V/H/S aren't returning for the sequel, they've secured some serious talent in their absence: The Raid director Gareth Evans and The Blair Witch Project co-director Eduardo Sánchez.

REALITY: Simon Barrett, who wrote "Tape 56," the wraparound segment in V/H/S, steps into the director's chair this time around for "Tape 49," a framing device that's damn near incomprehensible. I'll give it a shot anyway: A woman hires private detectives Larry (Lawrence Levine) and Ayesha (Kelsey Abbott) to figure out what happened to her missing son. They break into his house to find what looks like a modern art piece, several TVs and VCRs that seem eerily reminiscent of the dead guy's entertainment system in "Tape 56." But - and maybe you can guess this - somewhere along the line, our private detectives realize that maybe they're not alone in the house. 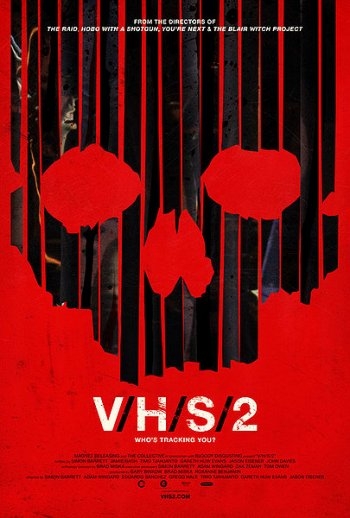 We all appreciate a clever poster.If "Tape 56" worked at all, it was on the strength of its protagonists, a motley bunch of sociopathic ruffians who videotaped their crimes for fun. In focusing instead on two straight-laced private dicks, "Tape 49" - as well as the second segment, "Phase I Clinical Trials," with a plot that echoes The Eye - trades that anarchic energy for a low hum sustained by bad acting. This is a portent for the film to come, as V/H/S/2 tones down its successor's discordant, arty horror in a bid for mainstream acceptance. That tactic works in the two middle segments, but the climb to those great heights, which takes us through 26 minutes of nothing great, is a bit of a slog.

At least "Phase I Clinical Trials," in which a young millionaire (Adam Wingard, who also directs) gets an ocular implant that records a little paranormal activity in his lonely mansion-on-the-hill, has a neat premise and at least one deliriously perverse moment involving a strange visitor (Hannah Hughes) whose cochlear implants record audio to match his silent visions. Wingard and Hughes won't win any acting awards, but this segment is almost passable.

The second full segment, "A Ride in the Park," is V/H/S/2's first moment of glory. Luckily, it's so good, it lends the film redemption. Look, I'm not a fan of zombie films, but if they all had this short's energy, I could be swayed. An unnamed bicyclist (Jay Saunders), filming the action with a helmet-mounted GoPro, encounters a woman in the woods screaming for help. And then she - well, hell, I'm not gonna go any further on this one. The segment, co-directed by Eduardo Sánchez and Gregg Hale, moves at a brisk clip and packs in a solid dozen outlandish moments, along with a couple of narrative twists. This is an admirable reinvention of zombie tropes, and proof that shamblers can still be scary in the era of the running dead.

"Safe Haven," co-directed by Gareth Evans and Timo Tjahjanto, is a similarly inspired riff ... on Indonesian sex cults. I'm not sure there's a trope to reinvent there, as my knowledge of Indonesian sex cult movies is admittedly spotty, but it's nice to see Evans transfer the manic action of The Raid: Redemption to a horror film. The result plays like the greatest Quake adaptation that never was: blood-splattered hallways, pentagrams, candles and the artificial parallax-shifting of the first-person shooter all figure prominently into "Safe Haven." All that's missing is the nailgun and rocket-jumping. At a full 30 minutes, this is the longest segment, but "Safe Haven" deserves the spotlight.

Too bad V/H/S/2 ends on a down note with "Alien Abduction Slumber Party," in which siblings and their friends run from people in gray-men costumes. Directed by Jason Eisener (Hobo with a Shotgun), this segment is little more than a light show, but even that's lost to ShakyCam and the downside of a dog-mounted GoPro: Orange fur fills a third of the frame for most of its runtime.

Unlike V/H/S, this sequel doesn't seem bent on punishing men for being creepy. Instead, it dares the audience to decode exactly what's happening while scaring the shit out of anyone who dares to watch it with headphones on. V/H/S/2 is more conventionally entertaining overall, but it does little to tweak that .500 average - actually, it sinks to .400. Still, after The Internship and After Earth, I'd rather stay at home, pay the $10 to watch an anthology film with two great segments, and not give the aliens who've taken over Hollywood any more support.

MINORITY REPORT: So what you're saying is that this on-demand idea is great because you can save money, stay home and support independent artists? Sounds good, I sure hope nobody contradicts this at any point. - Ian "Professor Clumsy" Maddison