EXPECTATIONS: I was tipped off to this piece of work by one of our fine readers, who claimed South of Sanity made "Eat Pray Love look like Back to the Future." I'm not entirely sure what that's supposed to mean, but it can't possibly be a good thing. This film purports to be the first fictional film entirely made in Antarctica. That might suggest they blew their entire budget on travel expenses, but upon further research, it turns out this film was made by people stationed in Antarctica as a way to pass the time. Awful or not, I'm already impressed.

REALITY: The horror genre exploded in the 1980s thanks to the advent of home video, and digital streaming is continuing that tradition by allowing filmmakers to stream their wares right into your living room. Services like Amazon and iTunes are infinite marketplaces, stocked with more movies than any one person can ever hope to watch. With any luck, that ought to make discoveries like South of Sanity a rarity. While I can't argue that the circumstances that produced this film aren't commendable, the film that those circumstances produced is still kind of terrible. 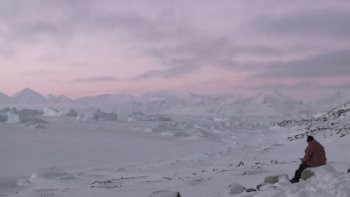 South of Sanity takes place during the winter of 2005, as a team of fourteen scientists(?) struggles to make it through the season intact. One crew member gets word that his wife has just left him and, in a state of depression, freezes to death out in the cold. As the crew mourns his death, a deranged killer begins picking them off in increasingly gruesome ways. Base commander Rob (Mathew Edwards) and his deputy Frank (Matt Von Tersch) must find and stop this killer before everyone on the base is murdered.

First things first: While "first film made in Antarctica" is a nice selling point, it does nothing to help the film itself. Most of it takes place in nondescript conference rooms, hallways and storage lockers, so we see precious little of the actual Antarctic landscape. What we do see is beautifully photographed, but as soon as we catch a glimpse of the mountains in the distance, the film cuts back indoors to a flatly lit conference scene with no sense of composition. If you're going to tell me you made your film in Antarctica, you'd damn well better show me some of Antarctica.

You might argue that there's some novelty in seeing the actual research facility used as the backdrop for a horror film, but there is nothing unique about the way they shoot it. Every hallway looks the same, the bunks and storage rooms are generally unremarkable, and there's an overriding sense of emptiness to the entire setting. I understand that they had to work with what they had, but it doesn't seem like they had very much to begin with. This could have been shot on a soundstage in England for all I know.

In fact, I am amazed that a film supposedly made for $1 million looks as terrible as this film looks. The bulk of South of Sanity features no lighting scheme to speak of, instead opting to work around the facility's own light sources to provide a sense of atmosphere. Combined with the digital-video aesthetic, South of Sanity looks more like an in-house training video on what not to do in Antarctica than a feature film about (presumably) the loss of sanity. 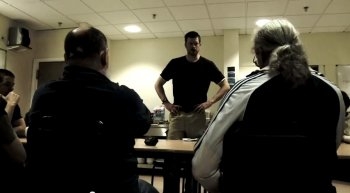 Also Antarctica... supposedly.This team is absolutely oblivious to its surroundings. Eight people, more than half of the group, are brutally murdered before anyone on the base realizes any of them are missing. One person suggests that maybe they're all just hiding out in their bunks (as one does during the workweek). Commander Rob agrees, having apparently not attempted to check on anyone for three whole days, because he is the world's worst commander.

By the time our team has formed a search party for the missing two-thirds of their group, it's obvious who the killer is. He lumbers into frame wearing a CPR dummy's face as a mask, and then after stringing up a bunch of photos of his dead victims (with himself in the pictures, oddly enough), he rejoins the group like nothing ever happened. What's less obvious is why he's doing all of this. Just before the credits roll, we are read some free verse about the killer's motives and his utter disdain for humanity. Before we're allowed to make any sense of the Poetry 101 assignment we just heard, the film smash-cuts to credits and a bunch of gnarly death metal pours out from the TV.

So what are we supposed to make of this film? South of Sanity must have some kind of point to it, right? Maybe this is a film that grapples with the state of spectacle-driven cinema and sides emphatically in the camp of realism. How else do you explain the film's stubbornly DIY aesthetic? Or maybe co-directors Mathew Edwards and Kirk Watson just wanted to learn how to make movies during their downtime from work. That would have been fine, but why should I have to pay money to watch an experiment?

Sadly, that's the world we live in now. The days of buying a movie, watching it, and then selling it back to a second-hand store are fading away. Now, the decision to stream any movie turns into a five-dollar gamble. We can't mail 90 minutes of streaming video back to Amazon HQ and ask for our money back*. That money has been blown to the four winds of the internet, never to be seen again.

*Of course, if anyone has figured out a way to do this, please let me know.

MINORITY REPORT: So what you're saying is that this on-demand idea is terrible because you sometimes have no idea what you're seeing, the service has no redeemable value to the end user and you can support clueless artists? Now I'm confused. - Ian "Professor Clumsy" Maddison