EXPECTATIONS: I was a little disappointed when I learned that this wasn't a biopic of Finnish racing driver Kimi Räikkönen. Looking further into it, I see that it's apparently a drama thriller about a hitman trying to improve his career prospects and provide for his family, but finding it difficult in the dangerous world in which he works. More to the point, it stars Michael Shannon, who has quickly become one of the must-watch character actors of his time. If all goes well, this could turn out to be the first truly great film of 2013. 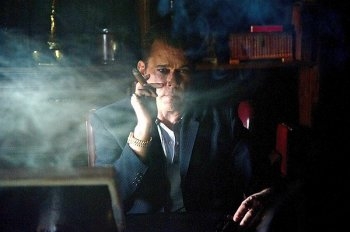 REALITY: The Iceman is definitely an accomplished piece of work, but for me it fell just a little short of greatness. The main issue with this film is that there just isn't enough bulk to hold up the weight of some of its more powerful scenes.


Richie Kuklinski (Shannon) is a small-time criminal doing post-production sound work on illegal pornography for mafia boss Roy Demeo (Ray Liotta). He's also a cold-blooded murderer. One day, Demeo takes note of Kuklinski's sociopathic nature and hires him as a contract killer. It's the perfect job for his skillset, and it's the perfect paycheck to provide for his wife Deborah (Winona Ryder) and two daughters. Eventually, however, Kuklinski finds himself out of work and decides to partner up with fellow hitman Mr. Freezy (an almost unrecognisable Chris Evans) to further his career. Relationships become strained, friendships are broken and Kuklinski finds himself doing whatever he can to protect his family.

The main point of influence for The Iceman is clearly Goodfellas. The same sense of "you just couldn't make it up," crazier-than-fiction whimsey runs through the whole thing, with blackly comic death montages and extremely energetic scenes of character development in which the violence and craziness and paranoia ramp up. Kuklinski himself is not energetic: He is surrounded by energetic characters who seem to be trying to infect him with their joie de vivre, but the effect is often reversed.


Kuklinski appears to be waiting calmly for death to claim him. He has a grim reaper tattoo on his left hand, he shows no fear of his own death, and he never eats. I know what you're thinking: Just because he never eats on screen doesn't mean his character never eats, just as we can all assume that every character in every film does take the time to use the lavatory between scenes. But The Iceman makes a concerted effort to show its main character actively shunning food. The closest he ever comes to eating is when he meticulously picks the mushrooms out of an omelette, which he then proceeds to not eat.


Perhaps this is an attempt to draw a deliberate non-parallel between this character and the food-obsessed criminals of Goodfellas (and, indeed, Liotta's character here, who has a lot in common with his Goodfellas role). There's often food around Kuklinski, and after the film's "turning point" - which we'll get to very shortly - food becomes not only something he doesn't partake of, but also something that can be very dangerous in his hands, climaxing in an inedible sandwich. 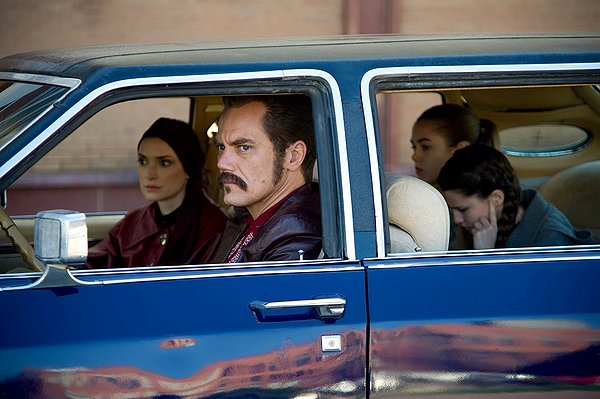 Would you really let that crazy bastard drive your kids anywhere?


Here's that turning-point scene: Kuklinski forces a whimpering James Franco to pray to God to come down and stop him. The effectiveness of this prayer is debatable, but this scene is immediately followed by the introduction of the Chris Evans character, who moonlights as an ice cream man and keeps the bodies of his victims frozen for long periods of time before disposal to confuse coroners. He changes the food rules and introduces Kuklinski to the makeshift world of food preparation, and his presence reverses the status quo of the film. You could take this to mean that he's God, but it's hard to argue that he specifically comes to stop Kuklinski; it's more so that he indirectly helps him bring about his own downfall.

An important subplot in The Iceman sees kingpin Leo Marks (Robert Davi) forcing Demeo to take disciplinary action against an employee (David Schwimmer) who he thinks of as an adopted son. This is where the film's weakness comes into play. The whole scenario could have done with a lot more embellishment, especially given that Liotta and Schwimmer are such a joy to watch together. Had their relationship been given more time to breathe, their final scenes together would have had more emotional weight, which would in turn draw a more precise comparison between this man who has no chance but to not defend his family and Kuklinski, who is forced into the opposite situation.

Winona Ryder's Mrs. Kuklinski suffers the similar fate of insufficient screen time. I suspect that someone thought The Iceman was getting too bloated, so they wanted to trim the fat and keep it as focused on Michael Shannon as possible (I wouldn't be surprised to see an Oscar nomination thrown his way for this one, either). Still, I can't help but feel that this film would have been better with the fat left on; I am holding out hope for seeing an extended version at some point.

If you're hoping for some insights into the criminal psyche, you may be surprised at The Iceman's suggestion that some people just inherently have violence within them and that without a professional outlet, this violence will affect their personal lives. In Kuklinski's case, his pent-up violence manifests as marital abuse. Improbably, the film then ties this thematically to Citizen Kane, even giving Michael Shannon an uncanny resemblance to Orson Welles in bookend scenes, except that his "Rosebud" is being beaten.


Should you watch The Iceman? Absolutely! Watch it twice; its secrets are well worth unraveling. It may fall short of its potential, but the only real issue I have with this film is that there isn't more of it.

MINORITY REPORT: You know, I've thought a lot about this and I've come to the following conclusion: Michael Shannon is one scary motherfucker. - Sean "Keanu Grieves" Hanson