EXPECTATIONS: Y'know, we probably could've skipped the Instant Watch poll altogether this time around, because as soon as I saw Thomas Kinkade's Christmas Cottage on the list, I knew which one I'd be watching. Yes, apparently you readers decided that the best torture for me would be the suffering of boredom. Well, joke's on you, folks. I will get all the way through this film, even if I have to stick Netflix on my TV in the background and go play Skyrim for the duration. Sure, that would be neither professional nor ethical, and it demonstrates a lack of integrity, but then again, so does Thomas Kinkade.

REALITY: For those of you lucky enough to have never set foot in a Southern Baptist church, let me explain who Thomas Kinkade is. Thomas Kinkade is a painter: More specifically, he is the "Painter of Light." His works are basically motel art, requiring not much more than a basic artistic knowledge. He paints sunsets and cozy snow scenes that are inoffensive and technically proficient, but lacking in any sort of message or heart. However, Kinkade has learned that the trick to being successful in America, much like the trick to being elected to public office, lies in pandering to the Christian right. Because he puts the little fish symbol thingy in the corner of all his paintings and says things like "When I got saved, God became my art agent," he is one of the most financially successful artists ever. He also might be one of the biggest douchebags on the planet.

Let's imagine that you're Thomas Kinkade, circa 2006. The LA Times article I linked above has just come out and sullied your righteous image by painting you as an embezzler, a casual molester, and a dude who pees on Winnie-the-Pooh statues. (All on the first page!) What can you do to win back the ten fans you have that read the LA Times? Obviously, you should make an inspiring holiday movie about yourself! Because producing your own biopic will absolutely not add to the belief that you're a total egomaniac! That's not an exaggeration, this movie is literally about young Thomas Kinkade (played by Jared Padalecki a man most famous for killing demons and appearing in thousands upon thousands of gay fanfics). It baffles me how strange the existence of this film is. In addition to Padalecki, you also have to take into account that director Michael Campus hadn't made a movie in 26 years before this one, and when he did, it was complete Blaxploitation with titles like The Mack. Apparently this was the script to pull him out of retirement, presumably because this is the only production that would hire him. 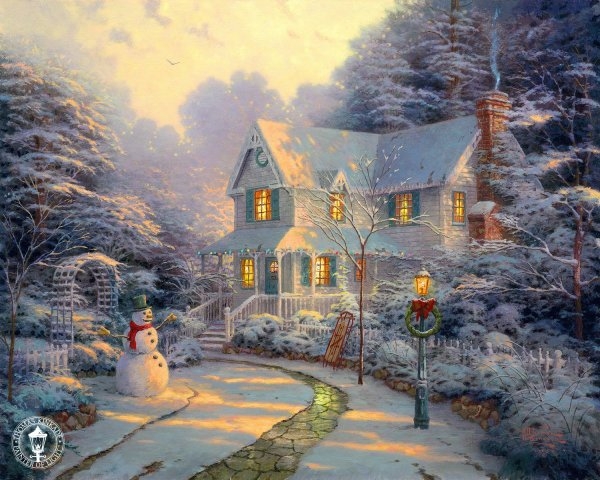 So let's go ahead and try to tell this story. 1977-era Thomas Kinkade, fresh out of art school, makes a trip up to his hometown of Placerville, a small village in the California mountains. There he discovers that his mother Maryanne (Marcia Gay Harden) has fallen behind on her bills and is in danger of losing her home. This would include the cottage that Maryanne rents out to a senile old painter named Glen, played by Peter O'Toole. Wait a minute, Peter O'Toole? What are you doing here? You're Lawrence of Arabia! Are you afraid God's not gonna let you into heaven because you made Caligula? 'Cause I'll tell you right now, if there's no Helen Mirren in heaven, I don't wanna go. The disgracing of an acting legend aside, the plot kinda stutters around for a little bit because Thomas Kinkade can't put on a show to save the house like the Muppets. What he can do is paint the background for the church Christmas Pageant, and he does. This is as interesting as it sounds.

To earn some money, Thomas agrees to paint a mural of the town for Ernie, the president of the Placerville Chamber of Commerce (Chris Elliot, wearing a ridiculously obvious toupee that no one ever mentions for some reason). Ernie specifically tells him not to do any of that "Artist's Social Commentary," and Thomas agrees to just do a straightforward holiday painting. The implications of this exchange are momentous. It shows that Kinkade is aware of the exact moment he became a hack. Not much happens for a long time. Papa Kinkade rolls into town, drops off some porno mags with his sons, (seriously, this happens) and is about to roll out forever, but then he doesn't. The bailiff from Night Court is in a Christmas light competition with his neighbors, but then he isn't. A few gags and situations are lifted from other Christmas movies, and still, nothing happens.

In all fairness, there is some fine acting here. There is some competent filmmaking here. Everyone involved does just well enough to keep us from calling them incompetent. Every piece of this movie is technically proficient, but lacking in any sort of message or heart. (Why yes, I did just copy those words directly from the first paragraph. Thomas Kinkade taught me that.) Because there's simply no purpose to this movie, it's just so boring. When it's not being boring, it's just being bizarre, like when Peter O'Toole's character claims his Alzheimer's is a good thing because it "makes him feel young again for just a minute." (Note: No one in this film knows how Alzheimer's works.)

Yes, the house gets saved, and we all learn a lesson about the power of faith, or the community, or the meaning of Christmas or something, I don't care. We also learn about the power of "light," because the word "light" is said in every third speech in this movie. "There's a light in you!" "Paint the light!" "You are the light of the world." I went to the IMDB quotes page for this movie and did a search for the word "light" and it came up 16 times. For a frame of reference, the word "Thomas" only has eight results.

This is the kind of movie that makes me re-think my critical process. I usually judge the quality of film by how well it achieves what it set out to accomplish. Christmas Cottage tries to be bland and uninteresting and inoffensive, and it succeeds. By that logic, I should be giving this a perfect score. But this formula results in a movie that no one would actually want to watch. It only takes a second to look at a Thomas Kinkade painting and pass it by, but this is a ninety-minute film. It's an hour and a half of your life to invest with literally no payoff. This is a proficient movie, but in this case that makes it a bad movie, and there's no reason to watch it, unless you are forced to by a voting audience. Or unless you are Thomas Kinkade, watching it while convinced it doesn't make you seem like an ass at all.