Tired of being part of the 99%? Why not plan a massive Tower Heist? Or, if that sounds too involved for you, why not forget all your troubles, gets stoned and have A Very Harold & Kumar 3D Christmas? Make the right choice, and Jesus himself will save you and make you his personal Machine Gun Preacher!

EXPECTATIONS: Oh boy, a heist movie starring brilliant comedians Ben Stiller and Eddie Murphy, plus Academy Award-nominated actors Casey Affleck and Gabourey Sidibe, with comedy guru Brett Ratner directing, and with five different people credited as screenwriters! And hey, the subject matter is timely, what with the movie coming out in the middle of Occupy Fever. Surely this perfect storm of elements means Tower Heist will be as funny and talented as its individual parts! Hey, wait a minute...

REALITY: For as much time as this film spends painting the wealthy as greedy old men who do nothing but steal poor people's money, Tower Heist is the very thing that Occupy Wall Street protesters are raging against right now. It's a corporation pissing $100 million down its leg by making a poorly conceived, unfunny comedy that I can't imagine will entertain anyone but the people who made it. Tower Heist is a film with so much talent in front of the camera that I'm genuinely shocked and offended that the people behind the camera couldn't find anything for their actors to do besides act out a heist plot that makes absolutely zero narrative sense. 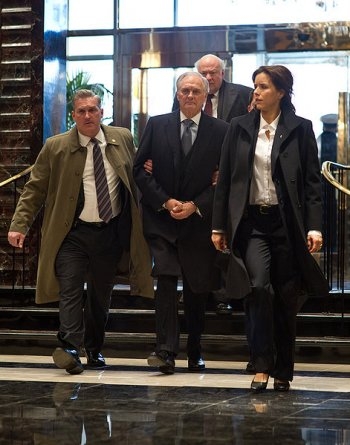 Has Alan Alda ever been a young man?Arthur Shaw (Alan Alda) is a millionaire Wall Street executive living in the top-floor penthouse of The Tower, New York City's most luxurious apartment building. After Shaw is arrested for embezzling money from a number of different groups, including The Tower's own employees, building manager Josh (Ben Stiller) hatches a plan to steal Shaw's nest egg. He enlists fellow employees Charlie (Casey Affleck), Enrique (Michael Pena) andOdessa (Gabourey Sidibe), plus recently evicted banker Mr. Fitzhugh (an utterly confused Matthew Broderick). With help from local burglar 'Slide' (Eddie Murphy), the gang does precisely what it sets out to do. Big surprise.

The biggest misstep in Tower Heist isn't its misplaced notion of pitting the rich against the middle class (which winds up being a non-issue), it's that nobody in this film ever comes close to doing or saying anything funny. And it's not the fault of the actors. You can tell most of them are trying. The problem is the script. It's written like a bad sitcom. There are setups and punchlines where jokes are supposed to go, but then instead of saying something funny, people just keep talking and the joke gets lost in the inane chatter.

I understand that comedy is subjective and that what one person finds funny another person might not, but I just don't understand what's supposed to be funny about any of this. Take Matthew Broderick's character, for instance. Mr. Fitzhugh has lost a lot of money on Wall Street, so much so that he's had to sell all his furniture and convince his children that they're 'going green' by sleeping in tents. He is written as the meekest person on earth, a sheepish savant who can't do anything but math, and his role in this whole charade is to act offended whenever Eddie Murphy calls him punk-ass bitch. But Murphy says that to most of the characters in this movie, so why is Fitzhugh even here?

The term "has-beens" jumps to mind, not sure why.

There is exactly one thrilling scene in Tower Heist, and it features Fitzhugh, so maybe that justifies Broderick's involvement. Halfway during the heist, Ben Stiller and friends decide to steal Alan Alda's Ferrari, which is inexplicably parked in the living room of his penthouse. Using the crane that hoists the building's window-washing rig, our heroes tow the Ferrari out the window and begin lowering it to Mr. Fitzhugh, who's waiting in an apartment a few floors down. Thanks to his being an utter weenie, Fitzhugh finds himself jumping out the window and clinging to the car's fender. There's terror in Broderick's eyes: The Ferrari, which bears a striking resemblance to the one from his Ferris Bueller's Day Off joy ride, may soon be the death of him. Of course, given that this is a Brett Ratner joint, I can't imagine anybody intended any of this. Subtlety and self-reflexivity are not Ratner's strong suits. Still, it's a fun image.

It's mind-boggling to think that this film originally began its life as "African American Ocean's 11." That could have been an interesting film, especially if Chris Rock had taken the Ben Stiller role as originally planned. But rather than lament what could have been, I have to wonder just what went wrong with the film they eventually made. Ted Griffin, who co-write the script with four other people, wrote the 2001 Ocean's 11 all by himself, so we know he knows how to write these things. This movie, however, has all kinds of weird gaps that suggest there's a much longer, more coherent version of Tower Heist lying on a cutting-room floor somewhere. It feels like they cut out a good hour of character development in order to keep things moving.

Look, a heist movie is not rocket science, yet Tower Heist apparently had ten different cooks spoiling this $100-million soup. You'd think somebody would have a grasp on how to make a movie like this at least somewhat palatable, especially when one of those people has done this before.

MINORITY REPORT: At first I was offended by this movie, because I thought the message was 'white people can't steal unless a black guy shows them how.' Now I'm pretty sure it's 'Ben Stiller can't display basic competence without Eddie Murphy showing him how,' which I find completely believable. - Martin R. "Vargo" Schneider

SA's Bloody Holly really gets the most out of Alan Alda; I wish he'd been at the helm. - Andrew "Garbage Day" Miller