REALITY: In his three-star review, featured today on IMDb, film critic waqar khan describes Scary Movie 5 as "the perfect film to watch if you want to commit suicide" and "one of the worst films ever made." I wholeheartedly agree, but let's be honest: You knew what you were getting. No one in that theater was deceived by a trailer or going in blind due to critical endorsement. I counted four dozen adolescents and a pedophile, sitting alone in his blue hoodie and laughing lamely every time a character said "penis" while secretly eyeing the children below us, and I thought: He has an easier time telling his neighbors about his past than I did purchasing a ticket to Scary Movie 5.

If you're reading this review - is anyone? - it's not because you're on the fence when it comes to seeing Scary Movie 5. You will, or you won't. And people who rely on the opinions of critics to determine what's worth seeing aren't among Scary Movie 5's target audience. You know who is in Scary Movie 5's target audience? People who enjoy easy jokes at the expense of blacks, Mexicans, the French, the crippled and the obese. People who enjoy a well-timed fart noise, or even a poorly timed fart noise. People who think the word "penis" is funny. People who think they have a shot with that fifth-grader in the front row. People who have learned, over time, that blue hoodies are particularly effective at absorbing the blood of children. 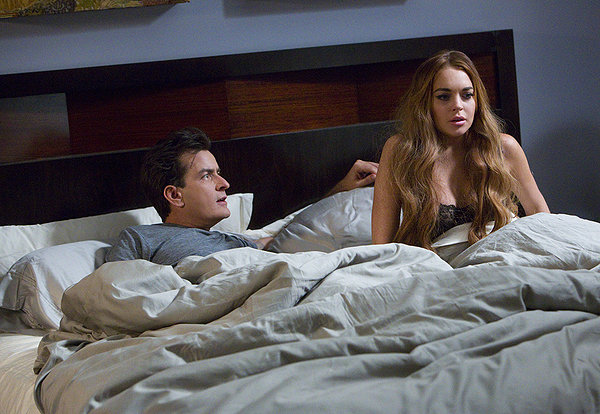 Shortly thereafter, the linens were burned and their ashes dumped on Leslie Nielsen's grave.

That's not to say I don't enjoy the occasional joke targeting blacks, Mexicans, the French, the crippled and the obese. Or the occasional fart joke. Or the occasional dick joke. But those jokes have to be a bit more clever than, "Hey, this guy is black. Look at him. He's black. He's doing black things. Now he's farting. Now he just pulled out his PENIS. Isn't his PENIS massive?! OK, OK, I'll say it: DONG. DOOONG." if you're in Scary Movie 5's target audience, we're not going to laugh at the same kinds of inappropriate jokes. We're not going to be doing much of anything together because I don't cotton on with fifth-graders whose parents don't love them enough to keep them from movies like Scary Movie 5. Sorry, but that's kept me from that volunteer position at Big Brothers Big Sisters for, oh ... going on a lifetime now.

There is an upside to all this awfulness: Scary Movie 5 is exactly as advertised. Even though half the scenes in the trailer are missing entirely. It's every bit as manic, irritating, undeveloped, half-baked and pandering as that preview promised. The tired "one tube goes in your mouth and the other goes in your anus ...whoops, I had that backwards" gag is gone, but somehow the Inception joke gets worse in its absence. Jody pees on an iPhone and then slaps it to her face when she gets a call, seemingly unaware she just finished intentionally urinating on her phone.


In the Rise of the Planet of the Apes parody sequence, a white scientist accidentally ascribes to his black boss traits one would normally ascribe to an ape. That's the extent of that joke, which, like most jokes in Scary Movie 5, stops there, content with whatever meager gains its makers have made with 10-year-old white children who haven't yet learned the etymology of, say, "porch monkey" or ...I dunno, "yard ape." One could argue that the scene attempts to parody such comical racial misunderstandings. Who has two thumbs and doesn't give a shit? Me. Because that joke, aside from approaching racist, is lame and outdated. I'm struggling to recall the last contemporary movie in which either term was used, and all I'm coming up with is a seventh-season Law & Order: Special Victims Unit episode about a neo-Nazi group, and I think network censors only granted producers one use of the N-word so the writers got creative. I can't even think of a single fucking movie in which someone actually mistook a black guy for a simian. Also, I'm pretty sure Terry Crews would beat your ass for making that mistake, even though I'm not exactly sure Terry Crews was in Scary Movie 5 because, hey, they all look alike - AM I RIGHT, WHITE PRIVILEGE? 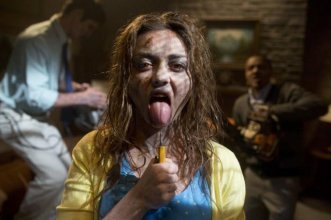 "If I have to see one more Scary Movie, I'll... I'll...!" - Sean HansonThere's a timely riff on Evil Dead '13, and that's the best part of the movie. It's the only joke to draw more than the faint smile of recognition, anyway. I chuckled. I actually chuckled. Lesson learned: A lone chuckle ain't worth $6.50 plus the cost of a soda. Maybe waqar khan gave Scary Movie 5 three whole stars - not just one star, which seems way more appropriate given waqar khan's commentary - because he learned that same lesson and we both put a premium on education, even if it means learning something the hard way. Watching this movie feels a lot like late-night channel-surfing when the worst sketches of Saturday Night Live are playing on every goddamn station. The difference is, channel-surfing is free.

MINORITY REPORT: 70% of the Scary Movie franchise is forgiven for the existence of the "cocking the shovel" joke from Scary Movie 3. It's the DUMBEST gag, and yet I still giggle like an idiot whenever I see it. - Martin R. "Vargo" Schneider

I don't think Hallmark makes a "Sorry I Made You See Scary Movie 5" card. It's probably too small of a niche, but I'll look into it. - Joseph "Jay Dub" Wade