The Place Beyond the Pines

EXPECTATIONS: When I first saw the trailer for The Place Beyond the Pines, I just assumed it was from a filmmaker trying to cash in on Ryan Gosling's performance in Drive. Can you blame me? He goes from playing a stoic getaway driver with a penchant for violence to playing a stoic stunt cyclist with a penchant for violence and also tattoos. I started to dismiss this film as a knock-off, but when I found out this is from the director of Blue Valentine, it instantly shot to the top of my April Must-See list. It's funny what a difference the right name can make.

REALITY: From its very first moments, it's clear that director Derek Cianfrance wants this film to be something special. We follow Ryan Gosling from his trailer through a crowd of people at a carnival, then up to a stage where he mounts a motorcycle and rides it into a steel deathtrap with two other stunt riders. That it's done in one continuous shot is nearly as impressive as the stunt itself. Similarly, The Place Beyond the Pines is a saga of Smalltown America that's as layered and complicated as the characters that populate it.

When stunt rider Luke (Gosling) rolls into Schenectady, New York with the carnival, he reconnects with an old flame named Romina (Eva Mendes), who has had a baby in his absence. Determined to provide for his newfound son, Luke takes a job for a local mechanic (Ben Mendelsohn) who tells him the best way to make easy money is by robbing banks. As Luke reluctantly takes on this new profession, he encounters police officer Avery Cross (Bradley Cooper).

Make sure you get all my ink in the photo. Oh, and the baby too.

Cross is an ambitious young cop with designs on climbing the political ladder, but before he can land any kind of promotion, he must contend with some dirty cops (led by Ray Liotta) who insist that he play by their rules. The decisions made by Luke and Avery will eventually decide the fates of their children (Dan Dehaan, Emory Cohen), who will find themselves colliding with one another years down the line, because that's just what happens in one of John Mellencamp's Small Towns.

If that sounds melodramatic, that's because it's supposed to. Cianfrance, along with co-writers Ben Coccio and Darius Marder, sketches out a portrait of Schenectady that makes its relatively miniscule familial struggles feel positively grandiose. The conflicts percolating in this film seem like they were pulled straight out of a Sophocles collection. This is a sprawling tale told in three acts, each a three-act story unto itself, inhabited by actors dedicated to making these flawed characters more than tired archetypes.

Ryan Gosling's performance alone is reason enough to purchase a ticket. He turns Luke from a hopeless drifter with a pretty-boy image into something resembling a responsible adult. At least, he does until he draws a gun on a bunch of bank tellers. Riddled with obnoxious tattoos, the most prominent of which is the word "Heart-throb" scrawled across his neck, Luke is a man who sees the writing on the wall for his carnie lifestyle, but is tragically lost when it comes to bettering his station in life. As stoic as the character is, there's a fragility to him that makes us want to see him succeed. 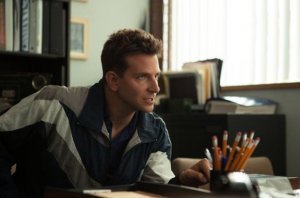 You can tell it's the 90s, because his hair is incredibly stupid.

This is a film that so desperately wants to be the next Great American Movie that it wraps itself in nods to Martin Scorsese and sings itself to sleep with Hall & Oates tunes. Ray Liotta's handful of scenes draw so heavily from Goodfellas that it's impossible not to notice. Pines is set just far back enough in our recent memory that it feels like it already ought to be a cultural touchstone.

Remember Goodfellas? Remember the '90s? Remember the ice cream shop your dad used to take you to? These are the thoughts that Pines wants to plant in your head. There is a sense in the film that we return to the things that shaped who we are, that we are constantly defining ourselves by what came before us. The film conveys this as a certain narrative poetry, as people and places echo between each of the film's three acts. What makes this kind of storytelling so fascinating is that it never shoves these rhythms in your face. It's there if you're paying attention to it, but the story is so well-told that it loses nothing if these things slip past you unnoticed.

Pines is at its worst when it's attempting to transition between acts. Act Two fades out anticlimactically, and Act Three begins abruptly with a title card reading "15 Years Later." The way this film switches gears is disorienting, and it takes a while to gather our bearings for the next sequence. I would call this a problem, but because Cianfrance attempts to paint such a vivid portrait of life in Schenectady, I almost have to say it's intentional. The paths we take in life aren't smooth or easy, and neither is the path taken in film. 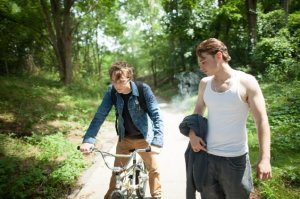 The notion of the American dream may be a broken one, the director seems to argue, but nothing can stop us from chasing it. There is something in our DNA that makes us want to follow after our fathers, even if that means stomping over the lives of those around us. And for as quintessentially 'American' this story is, there's nothing overtly nationalistic about it. Pines is a film that ought to play just as well in any other part of the world. Cianfrance manages to photograph Schenectady, New York in a way that transforms it into every backwoods town you've ever seen. This is a story that, in all likelihood, is playing out around us every day.

There are moments in the final segment where it seems like the script is just spinning its wheels, but for every lunkheaded passage about "the sins of the father," there are a dozen others that are far more poignant. The Place Beyond the Pines makes me want to return to the small town I grew up in and apologize to it. Not because I was some kind of ruthless hellchild, but because I'm sorry things have to change. Just like the lives we lead, this is a long, sordid tale. It may have been better realized as a mini-series, but what's here is absolutely terrific and not to be missed.

MINORITY REPORT: On the one hand, I don't want a gifted actor like Ryan Gosling to get typecast as a stoic man of violence. On the other: Drive, The Place Beyond the Pines and Only God Forgives. Come to think of it, I'm OK with him getting typecast. - Sean "Keanu Grieves" Hanson