EXPECTATIONS: Sometimes with this job, it's dangerously easy to get "critic" confused with "cynic." I try to go into movies hoping to love them, so it's discouraging when I find myself not looking forward to a film because it looks to be overwrought, triumphant-fanfare-playing schmaltz. I'm not saying I don't love schmaltz; schmaltz has always had a place in cinema. I'm saying there's a massive difference between "a film that inspires people" and an "inspirational film," if you catch my drift. The latter always has a ring of dishonesty to it, like it's designed by committee to bring in the "wholesome family values" dollar. This is what 42 feels like to me, and yet, when I walk into the theater to see that someone has paid to bring an entire Little League team to see this movie, the cynic in me has to go away for a bit, because really, that's more inspiring than the film itself can be.

REALITY: I think sports movies are more interesting for people who don't particularly care for the sport the movie's about. In two hours, it has to convince you that the game is worth your emotional investment and energy when you don't give a damn about it in real life. This is fairly difficult and impressive for sports like horse racing, lacrosse, or quidditch, but this is baseball. If you're an American, you get it. Even if, like me, you find baseball to be mind-numbingly boring, you know why it's important. You understand the relevance of the Sosa/McGwire Home Run Race, or the ball going between Bill Buckner's legs at the 1986 World Series. And damned if you don't understand why Jackie Robinson is kind of a big deal. But in case you don't, the movie decides "Tell, don't show, right?" and addresses the audience directly from the beginning to explain for us why baseball is awesome and Robinson is important. Yeah. We know. Can you start the movie now?


In fact, that's pretty much how the movie is about everything. I am beginning to believe it's impossible to make a film about racism with any sort of subtlety. Yes, I understand that "racist-teammate-who-learns-the-error-of-his-ways" is a necessary trope, as is "threatening-southern-guy" and apparently "benevolent-rich-white-person," but there's gotta be a line you draw. For this movie, that line is pretty much any time a child is on screen. Essentially, 42 director Brian Helgeland doesn't think you will be able to figure out that a little boy saying the N-word is supposed to be a bad thing unless he draws that moment out for as long as possible and zooms right in on the little boy's face, and then also makes sure you see him looking sad and ashamed two minutes later. You see, folks, racism is a bad thing, and apparently Brian Helgeland thinks you need his help in understanding that.

However, 42 takes the Matthew McConaughey route: What it lacks in modesty, it makes up for in charm. It boasts a stellar supporting cast of character actors, including Christopher Meloni as a lecherous manager, John C. McGinley nailing a perfect radio-announcer voice, and Alan Tudyk throwing himself into a racist redneck role. Unfortunately, the film takes time away from these actors so it can focus on Harrison Ford trying to act like someone other than Harrison Ford, and coming out as Foghorn Leghorn. 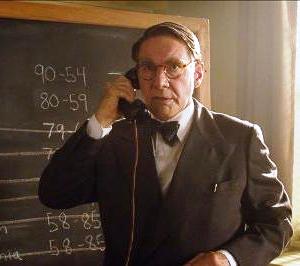 "You have reached the offices of Baseball. Please hold."Given that we're about halfway through the review now, maybe I should start talking about Jackie Robinson. Relative unknown Chadwick Boseman's performance carries 42 on his shoulders. He has the charisma and intensity to play a man like Robinson believably, and his performance and interactions with the rest of the cast are exactly what this film needs. When the film finally does pick up in the latter half, it is solely because of Boseman and the fun he's starting to have.

42 is a solid, if unremarkable, film. Considering Helgeland's writing credits are pretty much all over the board in terms of quality, I suppose we'll take that. At best, this is a very good made-for-TV movie. But our standards should be a little higher than that, shouldn't they? Solid performances are all around in this film, but even they can't make up for the insanely odd direction choices. This is a movie that removes Christopher Meloni's manager, one of the most entertaining characters, halfway through, then spends twenty minutes on-screen replacing him, then does nothing with the replacement. I'm sure this is something that actually happened in baseball history, but who cares? You could have removed it entirely, kept Meloni, and the movie would've been shorter and better. It's a movie filled with stuff like that. Yes, it's technically competent, but if you want to make a film that properly pays homage to an extraordinary man, "competent" doesn't quite seem good enough.

MINORITY REPORT: I'm British and therefore deeply confused by the existence of baseball. What is a baseball? Who is baseball? Why is it called baseball? How do you base a ball? All of these questions occur to us Britishers at least once, ever. - Ian "Professor Clumsy" Maddison