Punching Through Walls Should Always Be An Option

A man was recently paid actual money to speak on the behalf of an entire company, hoping to improve its fortunes with this proclamation about the near future: "It will no longer be acceptable to walk into a room where you can't punch a hole in the wall".

Let's savor that line for a moment. In the absence of any context, it's a thing of beauty.

Right, time for context. The man was Andrew Bowell, and he was representing Havok, a video game middleware company. Basically, when a developer wants their game to include physics they come to Havok and buy some physics. When a barrel gets knocked over and proceeds to roll over the twitching corpses of three identical mutants, that takes around $100 worth of physics. And that's only like five seconds. When you consider how many physics would be needed in an eight to twelve hour game and extrapolate the costs, you'll realize that Havok is in position to make a ton of money which may or may not vibrate until it flies off in a random direction.

So, naturally, that statement about punching holes through walls was self-serving. Havok wants the upcoming console generation to go nuts with physics. If everyone can blast through walls in every single game, the movement of every chunk of plaster will have to be calculated and Havok will become more profitable than Apple. 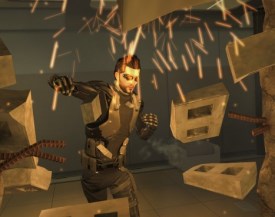 But is all that wall destruction a good idea? I had a terrific time punching through walls in Deus Ex: Human Revolution to access dusty sealed-up rooms containing energy bars and handguns, but is it really something we need in every game?

I'm really excited about an upcoming game called Gone Home. It's entirely about curiosity and exploration rather than bombast and violence. You wander alone through a highly detailed house and inspect everyday items to find out where everyone went, piecing together a mental portrait of a family as you solve the mystery. Imagine how great it would be if you could find a Riot Grrl mixtape, rifle through a stack of hidden postcards, contemplate the endless possibilities before a young woman and the missed opportunities that quietly haunt parents, then drive your fist through a wall and watch as each individual brick topples to the carpet in a dynamic explosion of force. Now that's what I call gaming.

I'm on board with the wall punching. Absolutely. Havok isn't the only middleware company with something to say about the future of video games, though.

Trees in games used to be pretty much identical, four-sided rectangles with 2D branch sprites sticking out at right angles. Modern games demand more detail and variety, but modeling hundreds of trees by hand is a colossal undertaking for any studio. This is where SpeedTree comes in with their highly sophisticated tree algorithms. Think back to your favorite tree from a video game. That was probably made by the fine folks at SpeedTree. Not to be outdone by Havok, they released a statement of their own about the next generation of consoles.

"There is simply no reason why there can't be a tree in every room. Or even better, a forest in every room. The setting of the game doesn't matter. Whether it's a zombie RPG or a gritty modern take on Paperboy, each room should be bursting at the seams with trees. This is 2013. We're living in the future. Hardware is more powerful than ever. Gamers simply will not tolerate a room without trees."

Within hours, Fork Particle put out a similar statement extolling the virtues of video game rooms containing so many particle effects that it's not possible to see your own virtual hand. RAD Game Tools also chimed in, citing research which indicated that modern gamers expect every surface in a room to be illuminated by projected full motion video, preferably delivered by the company's Bink format.

I don't know about you guys, but all of this is getting me pretty excited about the future of gaming. In a few short months we could be playing the 27th Call Of Duty, standing in particle-clouded cinema forest rooms, punching through any wall we please while our A.I. partner yells at us to follow a flashing objective marker.