EXPECTATIONS: Who is Alex Cross? Is he a tough-as-nails detective with a heart of gold? Is he a vigilante driven mad by vengeance? And who exactly is his wily adversary? An ex-military creep with a penchant for pain, or just a huge fan of Kevin Spacey's character in the movie Se7en? How will their struggle play out? Who will win? Who will die? Find out on the premiere episode of Tyler Perry's Alex Cross! Same Tyler time! Same Tyler channel!

REALITY: The film that Alex Cross most closely resembles is, of all things, The Dark Knight. Gritty films about equally matched crimefighters and criminals are a dime a dozen, and this isn't even the first time an Alex Cross novel has been adapted to film, so director Rob Cohen's decision to ape everyone's favorite Batman movie comes across more as a sign of desperation than a calculated stylistic choice. 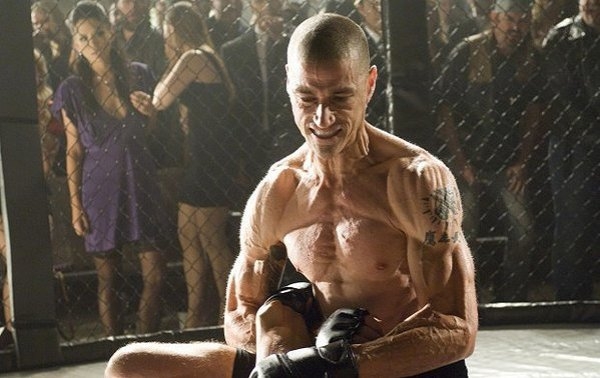 Alex Cross (Tyler Perry) is the greatest detective Detroit has ever seen. His ability to instantly deduce impossible facts, such as what his partner had for breakfast yesterday, practically makes him an actual superhero (suck on that, Batman). Cross and his team (Ed Burns, Rachel Nichols) investigate the murders committed by an assassin (Matthew Fox) they dub Picasso due to the charcoal sketches of his victims that he leaves behind. When Cross & Co. foil one of his murder attempts, the killer decides instead to target Cross. After Picasso kills someone close to Cross, the detective grows even more determined than usual to hunt the man down and end his reign of terror.

This is roughly the same plot as The Dark Knight, minus most of that film's political intrigue, but the similarities don't stop there. John Debney's score borrows the keyboard stings from Hans Zimmer's Batman music; the film's hand-to-hand fight scenes are shot in the same erratic shaky-cam style as the fight scenes in Batman Begins; and most importantly, Matthew Fox's Picasso character seems to be a ripped amalgam of Heath Ledger's Joker and a bemused chicken. He talks like the Joker, he moves like the Joker, and he becomes determined to drive Cross insane like the Joker. Fox gives the character enough of his own tics to set him apart, and even lost a ridiculous amount of weight for the role, but more often than not it seems as though he was directed to "do it the way Heath did."

To their credit, Tyler Perry and Matthew Fox try their damnedest to make these characters transcend their archetypes. Surprisingly, Perry holds his own during the film's more intense action beats. He might soon make for a believable action star, but his real problem is in selling the character during scenes of casual conversation. Cross is a detective who can see right through people, so to speak, but Perry conveys this by staring a thousand yards past anyone he's talking to. At times it is painfully obvious that we are watching Tyler Perry act rather than watching Alex Cross talk to his mother. 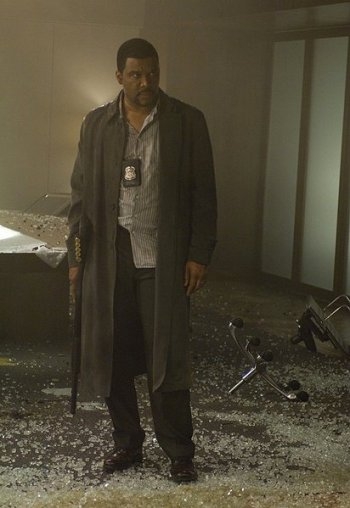 Everybody's least-favourite transvestite reimagined as an action hero. Who would have believed it?Where Alex Cross ultimately fails is in the script by Marc Moss and Kerry Williamson. Difficult concepts such as 'plot' and 'motivation' take a backseat, because it's assumed that Cross and Picasso's little game of Cops & Robbers is enough to carry the film. We're introduced to two businessmen, one of them German (Werner Daehn) and the other French (Jean Reno), but they are little more than cinematic coathangers from which the exposition and action can be hung. The film briefly toys with a subplot about Reno's character wanting to rebuild the old city as 'New Detroit,' but aside from a fistfight that takes place in a dilapidated movie theater, this really has nothing to do with the actual story, and only makes me wish this film were in some small way related to Robocop.

Because Picasso is an assassin-for-hire, his only motivations are money and the thrill of the hunt. "I'm fascinated by pain," he says in his best Jokeresque tone. On the other hand, Cross is a detective who is bound by duty to stop people like Picasso. The film wants us to believe there is something between these two characters other than business, something like what Batman shares with the Joker, but I'm not convinced that there's actually anything here.

Early on, a character introduces the notion that love and war are two sides of the same coin. So what exactly is at odds here? Cross' love for his family and Picasso's war on civility? Or is it Cross' war on Picasso's love for his job? I suppose they're the same thing, but the film is murky on just what we're supposed to believe about love and war. Duality really doesn't work if both characters exhibit both things in equal measures.

Ultimately, Alex Cross feels like a film cobbled together from scenes intended for any number of other possible Alex Cross movies. I hesitate to suggest that this is a truncated version, as I can't imagine any deleted scenes that might help this film make any more sense. Could there possibly be an extended cut in which Jean Reno's New Detroit initiative spawns a team of robotic police officers? I doubt it.

In the film's final moments, we see an Alex Cross who has been dramatically changed by his trials during the film. Despite already working for the Detroit police department, he decides to take the law into his own hands and seek vengeance on those who break it. If Alex Cross is destined to return in Alex Cross 2: Even Crosser (rated R this time?), he's better off leaving the Batman routine behind.

MINORITY REPORT: I've never read an Alex Cross book, but I've seen the Morgan Freeman films and I think the character is an interesting one who happens to be trapped in a world of cop thriller clichés. And, in the end, isn't that what cop thrillers are all about? Recycling the same tired ideas with new interesting characters? It's halfway toward great writing, but it's a good half. - Ian "Professor Clumsy" Maddison