Priest; Something Borrowed; Jumping the Broom

EXPECTATIONS: What is with all these wedding movies lately? If you count The Hangover II, there are four wedding-themed films this month alone. That is the same number as the amount of superhero films this year. Is there really that much of a demand for this? I'm imagining that somewhere in the world, there are a group of pissed-off bridesmaids whose charge is insisting upon dragging them to see every single film released that mentions the words wedding, marriage, or cake in the script. At least this weekend, we got multi-cultural with it, as there's a wedding movie aimed at black people AND a wedding movie aimed at white people, because according to Hollywood, those are the only two races that count.

Now, obviously being one myself, I don't mean all white people. So maybe I should be more specific. I hate the white people who are in this movie. I guess I could narrow it down to saying I hate a white person, but then it would just be easier to say "Kate Hudson." (Remember how Almost Famous was pretty great? Kate Hudson doesn't.) Now, I'm not saying that everyone involved with the making of Something Borrowed is a terrible person and they should apologize, but I'm saying it would be nice. 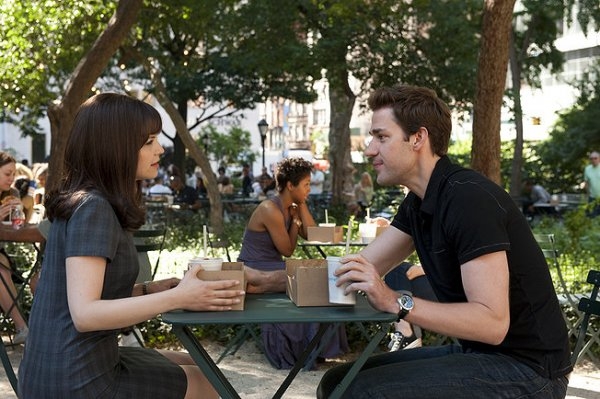 I tried, but I couldn't find a single image from this film that didn't include people eating or drinking...

Something Borrowed is about a woman who admits her love for her best friend's fiancé and begins to sleep with him two months before the wedding. That's it. That's literally the entire movie. You'd think there'd be some tension or some drama inherent in this situation, but no, not really. Unless you count the last ten minutes of the movie, where we just start throwing out plot points left and right and making everyone's head spin in a pathetic attempt to make up for all the plot and character the other 92 minutes of the movie forgot to have. Let's go ahead and run down our players here: Shy girl Rachel (Ginnifer Goodwin) is in love with Dex (Colin Egglesfield), who is engaged to Darcy (Kate Hudson). Also present for some reason is John Krasinski (Jim Halpert). There are some other characters and subplots, but quite frankly, I barely care about the ones we've already mentioned.

If you're going to have a movie where the heroine is a woman who is stealing her best friend's fiancé, you automatically put yourself in the difficult position of convincing us to root for her. But Ginnifer Goodwin seems convinced that pretending she's Drew Barrymore is a good career path, so we can't like Rachel. So they had better make damn sure we hate Darcy. Well, we do, but really no more than anyone else in this movie. Apparently, Darcy doesn't deserve love because ... she's a little self-centered? I guess that makes sense. Hey, you know who's allowed to be self-centered? People who are getting married. This flimsiest of excuses pardons just enough to make you take Darcy's side until you realize that Darcy is still Kate Hudson, and Gennifer Goodwin is cuter. 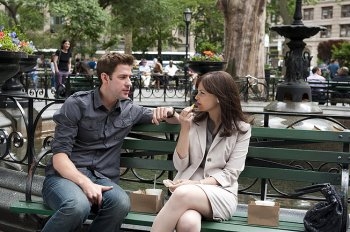 See?In fact, if you'll indulge me for a moment, I'd like to make this a John Mayer moment; wherein I use my limited platform as an entertainer to kiss the collective asses of any females who may be in the audience. (At last count there were seven. Four if you don't count our moms.) Girls with glasses and their hair pulled back? Kinda hot. Equally as hot as when they take the glasses off and the hair comes down, if not more so. Why does Hollywood keep perpetuating the myth that this is the indicator of asexuality? Several of the jokes in this film revolve around the idea that Darcy is the hot friend, and that Rachel is obviously not as hot as she is. They are, to invoke the title of a marginally worse film, the hottie and the nottie. Ignoring the fact that Kate Hudson just looks haggard in this film for some unknown reason (I'm guessing it's from dating the guy from the Black Crowes), what kind of a universe does this film live in when Ginnifer Goodwin is somehow considered the ugly one of the group? This film tells its core audience, young women, that mildly cute is the equivalent of hideous, and that doesn't seem right. Ladies, listen to me. You are beautiful. Never let anyone tell you that you're uglier than Kate Hudson. Also, your body is a wonderland.

But that's not the only issue I have with this film's ideas. Not since Eat Pray Love have I encountered so many characters whining about how hard it is to be rich and white. The fact that these people can up and leave for a house in The Hamptons at any time they want is not only mentioned, it is in fact a driving force in what little narrative there is. From the looks of this weekend's choices, Jumping the Broom is better because it at least remembers that poor people exist. Most of the time I won't dock a movie points for something like this, because I understand that some films are supposed to be escapism. As an audience member, you're expected to let these people live out your fantasy of partying with all your carefree pretty rich friends. (There are apparently no minorities in your fantasy world. You might want to talk to someone about that, man.) I understand this. However, there is a limit. When a major plot point in your film is whether or not a grown man's father buys him a two million dollar house, it is safe to say you have created a situation to which your audience can not relate. In fact, that conflict doesn't even make sense in the context of the movie. Why wouldn't the snooty rich parents want their son to marry the successful smart lawyer Rachel as opposed to the party bimbo who doesn't actually appear to have a job, Darcy? Never mind, I clearly put more thought into this than the screenwriters did. Point is, unrelatable.

You know what the audience can relate to? John Krasinski, whose character seems to be the only one interested in actually moving the plot forward. Without him to step in and speak for the audience every twenty minutes or so, literally yelling "DO SOMETHING!" at the other characters, the film would be a nonstop loop of "I like you." "I like you too." "I'm engaged" "Crap, I like you." "I like you too." FOREVER. You have created a plot that even your characters are bored with. This is what happens when you look at the Rob Schneider film The Animal and say "I bet the guy who directed this really understands women, let's give him a chick flick." With the wooden performances from everyone, and literally no story to develop, it's Krasinski who gets the best moments in the film, as though he's pretending he's in a better movie. However, that doesn't change the fact that he has to seriously deliver a scene where the tension is entirely dependent on the outcome of a Hampton Beach Badminton contest, which is the whitest, most boring sentence I have ever written.

MINORITY REPORT: Martin R. "Vargo" Schneider disappeared shortly after writing this review. If you have any information regarding his whereabouts, please contact the Current Releases office. Fellow critic Joseph "Jay Dub" Wade is believed to have had some involvement. - Ian "ProfessorClumsy" Maddison