Out of the Furnace

EXPECTATIONS: Trailers for this film just came out of nowhere about a month ago, and they all make it look gripping and engaging, with a pedigree cast. This immediately caused suspicion in me, because past experiences have taught me that trailers which go this far out of their way to be interesting are usually covering the amalgamated two minutes of excitation in otherwise mediocre crime dramas. This may be because any crime drama with Casey Affleck is automatically going to be compared to the near-perfect Gone Baby Gone, or it may be just that I am cold and cynical. either way, that is a cast which tells me this at least has the potential to be interesting... which will make it all the more sad when it is squandered.

REALITY: Why am I only ever right about bad things? Beyond just the cast, there are even more great concepts here that completely go to waste. Out of the Furnace is a technically well-made film, with a great sense of setting and absolutely brilliant cinematography from Masanobu Takayanagi. (That guy is good. Watch for his name on stuff.) These are normally things I love, but they are rendered essentially useless in a boring, lazy film. 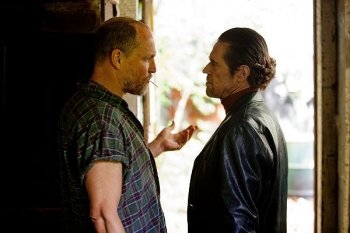 Look at how bad these bad guys are. So bad!This is where I describe the plot of the movie, and I'd ordinarily say something like: "Out of the Furnace follows small-town 'good guy' Randall Baze (Christian Bale) as he investigates the disappearance of his hot-headed Iraq War vet brother Russell (Casey Affleck) and his connection to cutthroat backwoods meth dealer Harlan DeGroat (Woody Harrelson.)" I could say that, and it would be a technically correct one-sentence summary of the film. However, it would also be misleading, because it takes literally over an hour into the film before the disappearance actually occurs, and that sentence becomes true.

So what is the first hour about, then? That's... a pretty good question. Russell owes money to small-time crime runner John (Willem Dafoe), Randall goes to prison for drunk-driving, Randall gets out of prison, several people punch other people, and Zoe Saldana and Forest Whitaker are there for no apparent reason but to fulfill the standard-movie-quota of women and black people. A lot of things happen in this first hour, yet somehow it feels like I'm watching nothing at all. Nothing that is very important to the second half of the film, anyway.

Actually, that's not true. The first half of the film gives us a lot of setup, too much, actually. There are crucial attempts at character development throughout (note the word attempts), but they're nothing worth spending an entire hour on. A better movie would have blazed through this in half an hour, forty minutes at most. In all fairness, if they had rushed it, I may have complained that the movie gave me no reason to care about the characters. But even with the snail's pace it holds, I still didn't, so what did they have to lose?

This is a shame, because what we potentially could have had here was Winter's Bone 2: Look, We Have A Budget, but wound up with a film completely unable to explore what it is given. Rust-belt Pennsyltucky and trailer-park Appalachia are a brilliant setting for a modern-day crime drama. There's the sense of desperation and distracted addiction which we know comes from economic disparity combined with a Deliverence-style fear of complete removal from society. It's a very good motif to use, and visually, Takayanagi and director Scott Cooper run wild with it. To play with this, they utilize beautiful framing shots of steel bridges and abandoned mill equipment, as well as cleverly-edited montages between bare-knuckle fighters and deer hunters, almost making you forget how forced the metaphors are. (As a side note, there was a movie this year set entirely in CGI Outer Space, how is it possible that we still can't make a decent-looking computer-animated deer?) 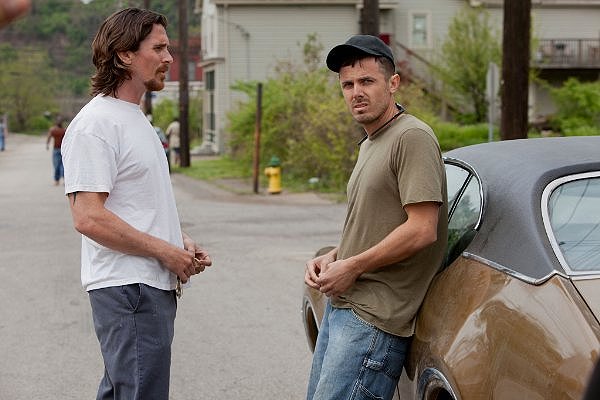 These good guys are so much better than those bad guys.


However, this setting is subject to only surface-level exploration, allowing for lethargic one-dimensional characterization. We have our very obvious 'Merican White and Black Knights: The hard-working American-value steel-worker Randall, who once served time for something that was only arguably his fault, and the PTSD-addled Russell, returning home from defending freedom to find that times are tougher than he thought. As I wrote that sentence, I realized those could be some interesting characters with something to say, but the film doesn't bother exploring this beyond an occasional argument. Defoe's Loan-Shark-With-A Heart-Of-Gold is the most interesting character, and Affleck acquits himself the most, playing his pitch-perfect mix of pride, desperation, and disillusionment. However, in the latter half of the film, neither of them are much of a factor in anything.

Woody Harrelson definitely gets the worst of this low-effort scripting, however. Harlan DeGroat is a bad guy, and... that's it. He's such a bad guy, in fact, that in the very first scene of the movie, he forces a woman to fellate a hot dog before smashing her face into a dashboard, Chris Brown-style. Why? What purpose does this serve? Well, obviously, it's to let you know he's the bad guy, right? That's not hackneyed and ideologically bankrupt at all! No, it's Mark Millar-level lazy writing, and since it's literally the first five minutes of the film, it leaves a bad taste in your mouth the whole time.

Obviously, there's an immediate comparison to be made to a similar scene in Current Releases favorite Killer Joe, but the key distinction here is context: In Killer Joe, it comes at the end, when we've already spent so much time with these people and the insanity of their situations that it feels like a shockingly-natural extension of the film's outrageous themes. As baffling as it is, there's a logical point to it, it serves a purpose other than to just prove that "Bad Guy Is Bad." In Furnace, this is our introduction to the character, using sexual assault and dehumanizing of women as a jumping-off point to relieve the screenwriter from actually having to give any depth or justification to this character's existence

Is small-town noir really that difficult to do? The Place Beyond the Pines and Prisoners were both better films this year with similar themes and styles as Furnace, but even they got tripped up on their own pacing. The difference is that nothing in either of those two films can be described as lazy. Those are films where everyone involved is clearly giving 100%, which partially absolves them of their flaws. In Furnace, the entire film is based on a faulty foundation, so no amount of decent performance or interesting camerawork can keep it from crumbling.

MINORITY REPORT: You can tell a lot about a film by the music they use to market it. One trailer featured a Pearl Jam song, while another featured a boring cover of a Neil Young song. This tells me that they desperately wanted people to think of this film as a grunge rock detective yarn, a subgenre no soul on the planet was asking for in the Year of Our Lord Two Thousand Thirteen. - Joseph "Jay Dub" Wade