Oh boy, is this a special week! So many important releases, and yet not one can surpass 40/50. We begin with Ian "Professor Clumsy" Maddison's exasperation at the mundanity of Star Trek Into Darkness, followed by Martin R. "Vargo" Schneider's almost-disappointment at The Great Gatsby. After that, we have Joseph "Jay Dub" Wade's bored admiration for To the Wonder and, to finish, Sean "Keanu Grieves" Hanson's absolute rejection of Aftershock.

EXPECTATIONS: It took some time before I warmed to J.J. Abrams' previous outing in the Star Trek franchise. It's not that it was bad, necessarily, but it had some pretty grievous problems, most glaringly the muddled and poorly conceived second act: Replacing one of your main cast members with an old man who used to play the role just kills the momentum of the whole thing. Up until that point, the whole film is about taking the franchise and its characters to their younger days, and it perfectly captures the youthful energy needed for that. Ultimately, though, Abrams' Star Trek did turn me onto the franchise as a whole, and I became very fond of Kirk, Spock and Bones.


Apparently there's some ridiculous rule that Star Trek fans treat as gospel: It states that every odd-numbered Star Trek movie is bad. It's a hugely wrongheaded idea expressed in lieu of having an opinion (Star Trek V: The Final Frontier is by far the best of the bunch), but if it were right then it would bode very well for what is either the twelfth or second entry into the series, depending on how you look at it. If they can rekindle the energy of the 2009 film and not let it flag, they could have a heck of a ride here. 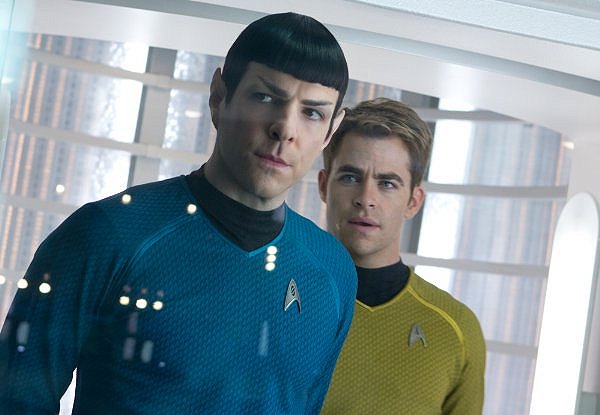 Yeah, this is what it's all about!


REALITY: There is a place that exists between disappointment and getting exactly what you expect. It is a strange place where everything is as it seems, but it also seems as though it could be better. Star Trek Into Darkness fits neatly into this place. It could have been so much more, but you know exactly what you're getting into. This is pretty much a remake of Star Trek II: The Wrath of Khan in the style of Mr. Abrams. The reason it comes off as disappointing is that there are genuinely interesting and topical ideas in here that just aren't presented in an especially interesting way. Also, from a design perspective it's a huge step down from its predecessor.

We open on the crew of the infamous Starship Enterprise trying to save a primitive civilisation from an apocalypse-level volcanic eruption. In order to do this, Spock (Zachary Quinto) sets off a cold fusion bomb inside the volcano while Kirk (Chris Pine) breaks as many rules as he possibly can to ensure absolutely nobody dies. They are both reprimanded for this by their immediate superior Captain Pike (Bruce Greenwood) and separated briefly until a terrorist known as John Harrison (Benedict Cumberbatch) starts blowing up Starfleet targets. Admiral Marcus (Peter Weller) then reassembles the Enterprise crew and sends them back out with 72 missiles to bomb Harrison into oblivion (and start a convenient war with a race called the Klingons while he's at it). 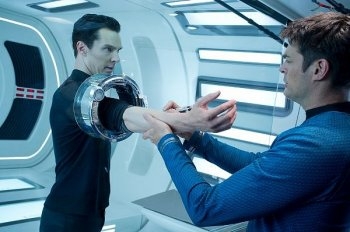 Cumberbatch, you don't suit overacting. Stick to being a massive arse man.The hook of the film, as in all Star Trek, lies in Kirk and Spock's relationship. Here they each learn important things about the other and end up trying to act how the other would act. The opening sequence goes to great lengths to establish Spock's willingness for self-sacrifice and Kirk's willingness to risk everything around him to save one person. As the film progresses, it leads to an interesting reversal of ideas presented in both The Wrath of Khan and Star Trek '09, as these two characters who essentially "complete" each other are forced to adapt separately and end up drudging up the traits of the other person to complete themselves.

This all comes to a head when an iconic scene from an earlier film is recreated with a twist. If you're familiar with your Star Trek, you'll see it coming a mile off; if not, then I can't help but wonder just what it will mean to you, if anything. Much like A Good Day to Die Hard, this film builds itself almost entirely on its relationship to another film. They should have called it A Good Day to Wrath of Khan. Unfortunately, Star Trek Into Darkness just isn't as cinematically clever as A Good Day to Die Hard.

The pace of Star Trek Into Darkness is overwhelmingly relentless. You're spoon-fed the plot for most of the first and second acts until all the twists are revealed at once in a single exposition dump. What's worse is it all feels like it's being aimed at a convention crowd; Cumberbatch's revelation of Harrison's true identity is so ludicrously ham-fisted as to render it useless as he pauses between every word while the camera zooms dramatically toward his mouth. There are a lot of moments in the film that are delivered the same way. Rehashes of old dialogue and enraged cries of villains' names are all designed to make rabid fans cheer. It all starts to feel depressingly like a Marvel movie after a while. You have to know who everyone is or you just won't give a damn. 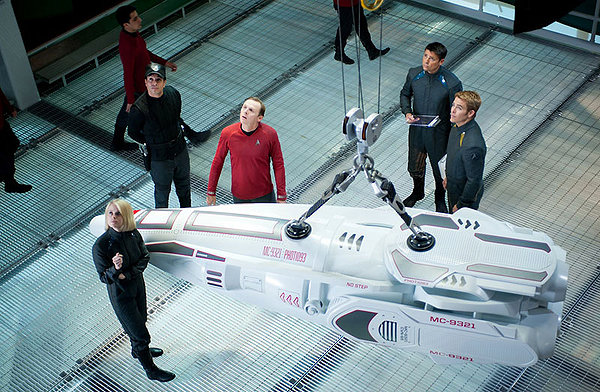 Nothing untoward going on here.


Aesthetically, we've lost a lot of what made Star Trek '09 interesting. The vibrant colours have made way for greys and blacks, those glorious Starfleet uniforms hidden behind ridiculous leather jackets. The brightness of the previous film is gone, with only a smattering of the lights and FLARES in the Enterprise's cockpit. Star Trek, the series still stands up as having an absolutely unique aesthetic, even compared to other Trek iterations, so it's a damn shame to see this film looking so bland. The 3-D is largely uninteresting, with only one genuinely inspired climactic moment to justify its use.

To close, it's worth noting that the central plot revolves around a world leader setting up false-flag terrorist strikes to further his own goals. Now, we all know this is a half-baked idea that gets thrown around a lot in real life by basement-dwellers whenever large amounts of real people are killed. As a plot device, it also popped up in Iron Man 3. I wonder... Do people in Hollywood actually believe this stuff, or do they believe that mass audiences believe it, or is it simply an interesting idea to regurgitate into movie scripts? Either way, I think we've found the new movie-villain fad. I can't wait to see how they crowbar this into Captain America 2.

MINORITY REPORTS: So Benedict Cumberbatch dramatically pauses between each word when he delivers a line? I feel like there's someone else associated with Star Trek that was known for that. I don't recall who, but I swear there's someone... - Martin R. "Vargo" Schneider