EXPECTATIONS: I'm... interested in where this film is going. If you had asked me last year, I would have told you I was genuinely excited, but now trepidation has set in. See, Baz Luhrmann has always been either the best or the worst choice for adapting this story, because his visions are usually bright and flashy and interesting, but emotionally empty. Fortunately, that's pretty much the whole point of the story. So, I was intrigued. Then came the delay.


When the film was pushed back from last December until now, it seemed likely that Luhrmann was applying a most un-Fitzgerald-like solution to problems with the production: Do it again, throw more money at it. So now I'm left wondering, and in fact doubting, if a director known for his signature emptiness is too empty to portray the necessary amount of emptiness. That hurts my head. Do pour me a drink, old sport.

REALITY: It turns out I was asking the wrong question. The issue isn't "Is Baz Luhrmann right for The Great Gatsby?" It's "Is The Great Gatsby right for movies?" It certainly seems like it should be easy to adapt, doesn't it? Thematically, it's not that different from other films we've seen denouncing the American Dream. By that I mean, The Great Gatsby isn't really that much different from Pain And Gain stripped to its barest elements. So why then has no one been able to make a Gatsby movie quite right? The answer, I believe, is that it's very difficult to make an entertaining visual adaptation of a book that front-loads all its most interesting parts in the first 100 pages. 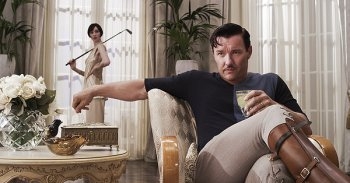 Look out behind you, she's got a club!So, to summarize the plot of a 90-year-old book: Would-be writer Nick Carraway (Tobey Maguire) moves to Long Island to become a bond salesman and finds himself entranced by his opulent neighbor, the mysterious, hard-partying urban legend known as Jay Gatsby (Leonardo DiCaprio). At one of Gatsby's weekly massive parties, he and Gatsby form a friendship, and Carraway learns of Gatsby's long-standing, semi-requited love affair with Nick's cousin Daisy (Carey Mulligan), who is married to rich boisterous racist Tom (Joel Edgerton).


With Nick's help, Daisy and Gatsby re-kindle their love affair, and everyone else dedicates their time to finding out who Gatsby really is, and where his money comes from. I'll note that one of the more interesting changes from the text is that in this version, Carraway is writing the story from inside a sanitarium, where he is being treated for his anger issues and alcoholism. At no point in time does he don a red hunting cap and proceed to call everyone he sees "phonies," though, so we can be kept safe from that portion of your 10th-grade summer reading list.

Apparently Luhrmann really was the best choice for this film, because it gives him an opportunity to steal from himself, so to speak. It's a collection of his calling cards, but none of it ever seems to match the quality of what he's done before. Like Moulin Rouge, Gatsby opens and closes with the romantic writer sitting at the typewriter, telling us his story. This is the real reason for the sanitarium change, as Baz Luhrmann seems to believe all writers must be tragic figures, and apparently Carraway's original ending of "screw you guys, I'm going home" didn't quite fit the bill.

Lurhmann works wonders with the grand extravaganzas of Gatsby's parties, including 3D champagne pops and a Skrillex-looking organ player, yet none of it matches the ridiculously bright portrayals of debauchery from Moulin Rouge. Luhrmann also steals his own shots from Romeo and Juliet to build his trademark doomed epic romance between Gatsby and Daisy, framing them as tragic lovers while Lana Del Rey mumbles triumphantly over the score. 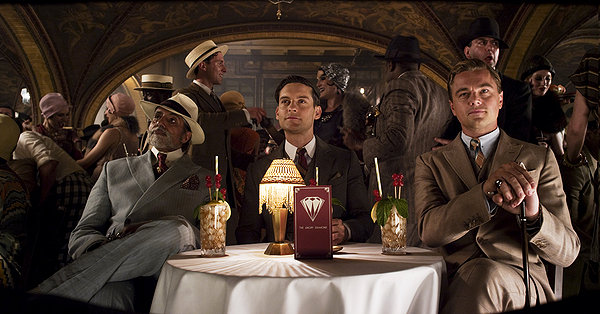 The Gatsby crew, all present and correct.


This all works during the first hour or so of the film. Luhrmann uses his hyper-kinetic style to leave us confused and frantic, just like our audience-stand in Carraway as he watches all the bright and pretty rich things around him. Luhrmann adds to the story with his camera. He switches angles and imposes shots so quickly it's almost nauseating. (PSA: If you get sick during 3D films, you will not enjoy this movie.) He frequently imposes a shot on top of a virtually identical shot, just so that the camera isn't holding still for more than five seconds. This becomes frustrating: Luhrmann's doing so much interesting work with the sets and the 1920s-film feel, but he doesn't hold still long enough to let you get a look at it. You find yourself thinking "Hey, man slow down, there's so much interesting and beautiful stuff going on and you're not appreciating any of.... ohhhhhh."

The issue here, though, is that so much is happening in this period that when Gatsby comes out of the rain to see Daisy again, time stops. I don't mean "they were so in love, it made the earth stand still" sentimentality, I mean the whole movie grinds to a halt, and it remains slow and uninteresting for the entire second and third acts. I realize that the purpose of all of this is to capture the melancholy feel of the end of a party, like Fitzgerald intended, but the movie is two-and-a-half hours long, and this happens about an hour in. This means we spend more than half of the movie in a hangover, and unless you're following along with our friends at Alcohollywood, you probably did nothing to deserve it.

Striking imagery, but is it entertainment?DiCaprio's performance drives the film, as he switches between portraying Gatsby as invincible and vulnerable. When Gatsby is preparing to meet Daisy at Nick's house for the first time, he overcompensates by filling the home with flowers and anxiously pacing about, looking for any excuses to leave. He turns a powerful, mysterious figure into a scared teenage boy, and he makes you believe in both.

Joel Edgerton, one of my favorite newer character actors, has an insane amount of fun playing the film's "bad guy," to the point where you forget that he's basically a massive stereotype. Carey Mulligan's portrayal of a bored, frail, old-money debutante is pretty much pitch-perfect as well, but that's almost cheating. She always looks vaguely afraid of something all the time anyway.

I can't really finish this review without talking about the music. Anachronism is another one of Luhrmann's favorite tools, so it's not really surprising how well he integrates Jay-Z's soundtrack. (Honestly, I think Kanye would have been a better choice to make music about the inherent loneliness of constant partying, but this works too.) Each song gets multiple creative arrangements, allowing the music to be adapted to multiple uses, and makes the soundtrack the most connective part of the film. The use of pop music illustrates and contemporizes the continued glamorization of the rich, and it's also probably one of the best soundtracks of the year on its own.

There are many things that work in this adaptation, beyond that damned boring latter half. The truth is, though, that during the transition from page to screen, you will always run into the same problem. Because of this, even the best Gatsby will never be that Gr... no, fuck this, I'm not saying that.