EXPECTATIONS: I have no idea what this is. It looks like one of those pseudo-Christian movies that you guys make me do, but those are usually pretty painfully overt, have marketing campaigns which dominate the paperback section of your local Walmart, and most importantly, don't feature an actress who was last seen forcing James Franco to fellate a gun barrel. So now I'm left wondering, what is the point of making this movie? Where is the audience for this film, if it's not at your local parish? Is it all twenty hard-working members of the Brendan Fraser fan club? Is it the sorely-untapped angry-pregnant-teen market? Or maybe it's that small faction of people that felt Precious was too subtle. Please, someone tell me who I can blame for this. 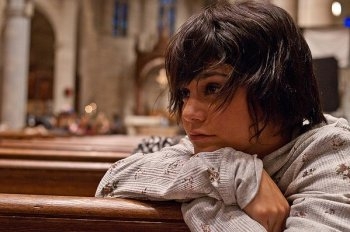 REALITY: This is a rare "treat" for me. I see bad films all the time, but here I get to explore the depths of pure incompetency. A common critique aimed at film is that they "look like TV movies", which has come to mean so many things that are essentially meaningless at this point. Gimme Shelter doesn't look like a TV movie; it looks like a class project. It is like a film's first draft, where everyone just said "Eh, sure, that's fine."

Gimme Shelter, depressingly lacking in stones of a rolling variety, follows Agnes "Apple" Bailey (Vanessa Hudgens), a teen prostitute who runs away from her abusive drug addict mother June (Rosario Dawson) to track down her estranged father Tom (Brendan Fraser), finding out along the way that she is TEEN PREGNANT. I'd like you to go ahead and count the drama points in that sentence, because this movie is going for the high score. Tom, who is now a successful Rich Person takes Apple in for a few days, but she leaves again when he disagrees with her decision to keep her baby. After a stint in the hospital, Apple is directed to a pregnant girls' shelter, and... you know what? Literally nothing happens after that point. That's like, the first hour of the movie. Also, James Earl Jones is there, too.

Seriously, for cramming in so much exploitative Law & Order issues, this movie reaches a point where they just run out of conflicts, and just starts throwing out issues as they come up with them. Apple has a supposed conflict with one of the other girls in the home... but no, she doesn't, we don't actually see them interact. Then that girl leaves the movie, and is never mentioned again. The tagline of the film is "Sometimes you have to leave home to find your family," but we never actually see the girls become family. Or friends. Or even start to like each other. It just... appears. This movie's plotline just reads like someone describing an outline for their creative fiction community college class. I think the entire script may have been a pamphlet.

But most egregious of all these sins is that the film is terrible on the most basic technical levels. The sheer inability to follow basic standards of filmmaking techniques makes an already dumb and boring film into something offensively unwatchable. In one scene, June comes back to get Apple from the shelter, and either Brendan Fraser missed his cue or something similarly disastrous happened. The point is that the director very desperately needed to yell "Cut" and he never did. 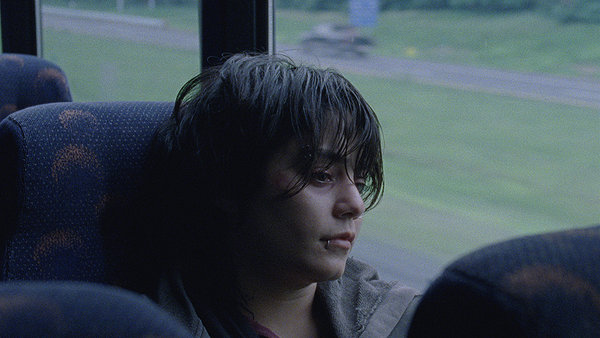 Such a pleasurable experience.


As a result, in what is supposed to be a dramatic moment, all four actors in the scene are very obviously, very painfully ad-libbing to the point where they're immediately repeating things they already said. It's like a Family Guy joke, it just won't end. Even the camera operator is in an awkward spot, it's a horribly ugly, disjointed shot, and we're stuck with it. And then they looked at that, said "Yeah, okay", and put it in the final print of the movie.

At least, I'm assuming that's what happened. Otherwise, that would mean that the script actually said "Rosario Dawson is pushed out the door, and comes back in yelling gibberish. Five times in a row." Even giving the benefit of the doubt here means someone is failing miserably at their job. This is like playing a game of Clue only we're trying to figure out who murdered the movie "The director, with incompetence, in the editing room" " The writer, with laziness, in his mother's basement." (M.Night Shyamalan twist: THEY'RE THE SAME PERSON.)

Everything about this film is just astoundingly, confusingly bad. This is the antithesis of film, a visual compendium of nothing. Its blandness and obvious lack of effort are an affront to filmmaking itself. This is a film where a woman hides a razor blade in her teeth and uses her mouth as an Edged Weapon, and somehow manages to screw up making that look interesting. This movie left me with many questions, not the least of which is "Why didn't she just use an actual knife?", but also "Why did no one even try to make this movie better?" "Who is this movie even made for?" and finally, "How can you live in a world where you are aware that competent movies exist, and still think this is something acceptable to release into the wild?" The phrase "offensively bad" is thrown around a lot, but I don't think there are any more appropriate words for the mixture of confusion, irritation and boredom inspired by this movie. How appropriate it is that after nearly four years as a film critic, it is an "inspirational" film that causes me to have an existential crisis.

MINORITY REPORT: It sounds like That Awkward Moment could have borrowed a few points of conflict from the story of Gimme Shelter, then instead of it having none and Gimme Shelter having too many they could have become balanced in mediocrity. - Ian "Professor Clumsy" Maddison