Transformers: Dark of the Moon marks the third installment of a franchise not known for its grand, sweeping statements. By contrast, people expect nothing less than profound epiphanies from Terence Malick's Tree of Life. Are these films going to be life-changing, game-altering experiences? Maybe one of them will. Certainly not both.

Transformers: The Dark of the Moon

EXPECTATIONS: Ever since Transformers 2 came out, all I've been hearing from everyone involved is "Sorry about Transformers 2." It seems like a lot of effort went into trying to make Dark of the Moon superior to its predecessor. Megan Fox was dropped, as were the racist twins. Shia LeBeouf promised to turn down the volume on his "nononononoNOO!" screams, and Michael Bay promised to blow up even more things. (In Michael Bay's mind, all problems are solved with explosions. It puts a strain on his dating life.)

Basically, everybody involved with this film has spent the past year reassuring us "It's not as bad as the last one, we promise." Well, that's fine and dandy, fellas, but maybe you should set your sights a little higher than "not total crap." Maybe, and I don't want to tell you how to do your job here, but maybe the goal you should be shooting for is making a movie that's, y'know... good. Do you understand "good?" Are you aware of the concept? Okay. Let's try that this time.

REALITY: Before I became the widely respected film critic and international sex symbol you see today, I spent three years working at an elementary school. Some of those little bastards still owe me a favor or two, and this week, I'm cashing one in. Ladies and gentlemen, here to review Transformers: Dark of the Moon so I don't have to, from Ms. Reynolds' third-grade class, a walking case for education reform named Tommy Simmons, age 8:

This shot is obviously from the scene where Sam plays the new Transformers video game.

This is my report on the new Transformers movie. It is called Dark of the Moon, not Dark Side of the Moon, like the music dad plays when the garage gets all smokey. It was made by a man named Michael Bay. Michael Bay makes movies with lots of explosions in them. I like it when stuff blows up too, but Michael Bay likes it even more than I do!

This time, Sam (Shia Lebeouf) isn't with his friends, the Autobots, because he's trying to get a job. I know because he says over and over again how much he doesn't like it. He's really whiny. The Autobots are busy working for America and blowing up bases in Iraq filled with bad guys and stuff. I guess it's fair that they work for America, because we took their side in the first movie for no reason. And Optimus Prime is always talking about Freedom, and saying that the other guys are all Tyranny. I don't know why, but this movie made me really like America. 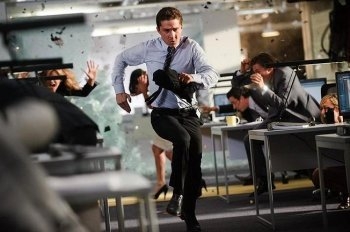 This is obviously a real world scene. You can tell from the EXPLOSIONS!!!Sam can't get a job because of the economy, and he has a new girlfriend that's prettier and a slightly better actress than the girl in the other two movies. I guess Sam doesn't remember that the last time he got a new girlfriend, she was an evil robot. Actually, I don't think anyone remembers that. His girlfriend has a boss (Patrick Dempsey) who has a lot of cars, and he's not very nice, but that's boring because there's no robots. There's a lot of time in this movie that doesn't have robots. That's boring. She gets kidnapped and Sam has to save her. I think Michael Bay played Mario a lot, because all the girls in his movies are like Princess Peach.

The Autobots find out their old boss Sentinel Prime (The Old Spock) is on the moon, and he has some pillars that make a teleporter, so they go and get him, but then he turns out to be a bad guy who made a deal with Megatron a long time ago. Even though the war is over, he still keeps his promise to Megatron, and I don't know if that's good or not. Also, a bunch of people work for NASA that also work for the Decepticons, and then the Decepticons kill them for some reason. That part didn't make a lot of sense. The funny agent from the last movies comes back too, but he doesn't get peed on this time.

This movie is a lot more violent than the other Transformers movies. Some of the Autobots even die. I'd be sad, but I didn't actually know which ones they were. My favorites were Optimus Prime, Bumblebee, the red one, the green one, and the blue one. There were some robots that were NASCAR cars too, but they never raced, and they didn't sound like NASCAR drivers. They all sounded like they were English. I guess they were there because the twin robots from the last movie weren't there. I don't think Michael Bay watched the last movie before he made this one, because he forgot a lot of stuff. He forgot that there's a gun on a ship that can shoot stuff from like, a gazillion miles away. They could've used it in the last battle and it would have made everything a lot easier. 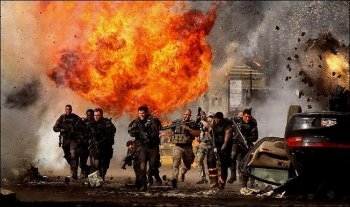 MORE EXPLOSIONS! BOOM! KAPLOOEY! KACHOWN!There was a lot of stuff in this movie that looked like stuff I saw on the news. The Decepticons blow up a spaceship, and it looks a lot like that old tape of the space ship blowing up. I think it was on purpose. When the Decepticons blow up Chicago, it looks a lot like when the terrorists blew up the Twin Towers on 9/11. I think Michael Bay wanted us to be sad and scared, so he used pictures that reminded us of sad and scary things. Then he put exploding robot trucks with gun-arms in there!

Overall, I think this movie was not as cool as it could have been. It didn't make any sense, like when someone changes the rules of the game we're playing to rules they made up. (Yeah, I'm talking about you, Joey.) Sam whined a lot, and most of it looked like those commercials they play before the movie to try to get you to join the Army. I noticed that all the soldiers and the astronauts were heroes, and all the people who were rich and all the people who did math were all bad guys. Michael Bay must not like math class. I don't think Michael Bay likes school at all. I don't like school either, Michael Bay, but I know that a story about giant truck-robots shouldn't be boring, and maybe you should go to school to learn that.

MINORITY REPORT: I don't like to think of Michael Bay as incompetent. I think it is more apt to say that he shares the mindset of his target audience; thirteen-year-old boys. Just as J.J. Abrams' Star Trek was marketed as "Not your father's Star Trek," this is no longer our Transformers. This Transformers belongs to a new generation, which can mean only one thing: We are too old for this shit. - Ian "ProfessorClumsy" Maddison