EXPECTATIONS: It seems that every time anything related to Shakespeare hits cinemas it's either a complete bastardisation of his work or some sort of myth about who really wrote it in the first place. Now we have Ralph "Rafe" Fiennes striving to get it right with Coriolanus, one of the less exposed of Shakespeare's plays. On the other hand, it does feature Gerard Butler and his ski-slope of a face, so I'm up in the air on this one.

REALITY: As powerful as it is, Coriolanus offers little in the way of emotional satisfaction, due mainly to the fact that Ralph Fiennes somehow manages to be the weakest element of his own film. That's not to say that he's bad, but when everyone else around you is stealing your limelight, maybe you should pick if you want to direct or play the lead role and not do both? 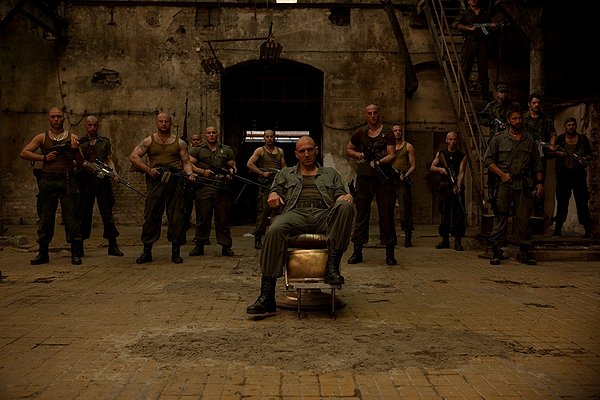 In a modern facsimile of ancient Rome, General Caius Martius (Fiennes) fights for his country but hates its common people. After a successful battle in the Volscian city of Corioles, where he faces off with his rival Aufidius (Gerard Butler), Caius Martius is given the title "Coriolanus" and elected consul. When two Tribunes, Brutus (Paul Jesson) and Sicinius (James Nesbitt), convince the people that Coriolanus has made a mockery of them, he is banished from Rome. Finding his way to the camp of Aufidius, he joins the Volscians and leads them on a campaign of revenge against Rome.

Now, as much as I think the film has its faults, you can't fault the source material. Shakespeare's exploration of class struggles, war and politics remains as powerful and relevant today as it has ever been. The modern presentation simply cements that fact. This is a much better Thatcher film than that actual Thatcher film. See? If you want to make a relevant political thriller, all you need is some 400-year-old material to base it on. 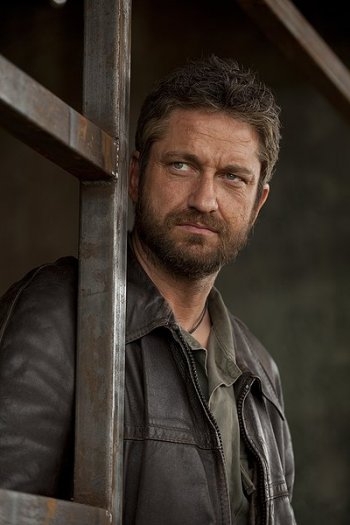 Butler, what are we even going to do with all that forehead?While the modernisation works for highlighting the political relevance of the story, it also leads to some very odd scenes. The battle sequences all feel like a game of Call of Duty, with gritty realism and consequence-free violence interspersed with lyrical monologues. Add to that a truly weird television news device that spoon-feeds us plot points with headlines intercut with punditry from none other than Jon Snow, Britain's most beloved news anchor. (Now I want all my news to be delivered in the style of Shakespeare.) It is worth noting that Snow has played this Shakespearian version of himself before in 2001's Othello; I hope this becomes a running gag for future Shakespeare adaptations.

The cast is mostly great, with Brian Cox and James Nesbitt as the real standouts, bringing a lot of naturalistic charm and humour to their characters. Everyone sells their relationships perfectly: You could watch this cast stand around silently and know exactly how the characters relate to each other. Martius' closeness to his mother (Vanessa Redgrave) and distant coldness to his wife (Jessica Chastain) are very believable and telling. Brian Cox's Menenius is like an avuncular figure, hovering over everyone like he knows them inside and out until his own friendship with Martius and his family becomes his undoing.

The most intriguing relationship in the film is the one between Martius and Aufiidius, blurring the line between love and hate. Their fights are more like loving embraces, and their actual loving embraces are done with drawn blades to each other's backs. It's a wonderful dynamic that these men share so much intimacy where a man and his wife do not. It's a shame, then, that it is realised with the two weakest performances in the film.

Butler struggles to know whether he should be playing the role Scottish; he doesn't bring any naturalism to the language where it is really needed. And Ralph Fiennes, a man who has proven himself time and again to be a brilliantly villainous presence, instills very little depth to Martius. As a director he has drawn some incredible work from all around him, but he struggles to find it in himself. That is Coriolanus' main failing, but it isn't one that detracts from the strength of the material. This is Shakespeare, after all.

MINORITY REPORT: You can tell a lot about a Gerard Butler film by the size of his beard. When he's got a clean shave or a little stubble, you know they're pitching it to all four quadrants. But when he rocks the full 300 beard, it's action fans or bust. - Joseph "Jay Dub" Wade