EXPECTATIONS: Here's a film that leaves me somewhat conflicted. On the one hand, it looks thoroughly uplifting and life-affirming and all that good stuff, yet at the same time I still can't look at a film about 9/11 as anything other than a manipulative play for my wallet's heartstrings. I'm sure Extremely Loud and Incredibly Close will be a perfectly fine film with a message worth hearing; I just bristle at the road I know it will take to get there. 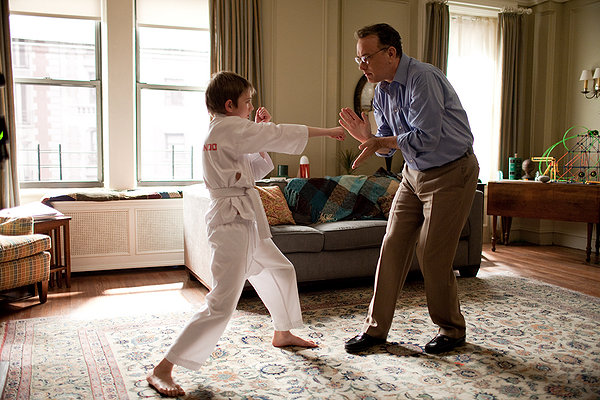 REALITY: It's clear that even ten years out, a lot of people are having a hard time moving on after 9/11, and a lot of those people are having an equally hard time figuring out how to express that angst. Extremely Loud and Incredibly Close feels like a film made by one of those people. At times the film is poignant, sometimes incredibly so, but at other times it seems content to wallow in the grief and sadness that people know all too well, at no real benefit to the film as a whole.

Oskar Schell (Thomas Horn) is a precocious young boy diagnosed inconclusively with Asperger syndrome. On September 11, 2001, Oskar lost his father Thomas (Tom Hanks), the only person Oskar felt truly understood him. A year later, Oskar discovers a key among his father's belongings and sets out across New York City to find the lock that it opens, believing it to be the last game his father had designed for him. Along the way, he encounters hundreds of New York residents, including an estranged couple (Viola Davis, Jeffrey Wright) and a mute old man (Max Von Sydow) renting a room from Oskar's grandmother.

When the film settles into a groove of following Oskar on his journey, it's lively and engaging, a perfectly decent film about a kid searching for meaning in a world that suddenly has none. Often, however, the film feels obligated to remind us of the tragedy that set this whole journey into motion, and in those moments Loud/Close comes to a screeching halt.

The fact that there is pain and sorrow in losing a loved one isn't what brings these scenes down; what brings them down is director Stephen Daldry's insistence on including so many of them. I doubt there is one among you who doesn't know perfectly well how the events of 9/11 played out. None of us need it repeatedly explained. Despite this, Loud/Close shows us the scene in which Oskar's father leaves one last phone message before the towers collapse. Then we see Oskar replaying the messages to himself sometime later. Then he does it again. Then he plays the messages for someone else. Then he and his mother (Sandra Bullock) argue about it. The film plays this note so persistently that it loses sight of what hooked us to the story in the first place. 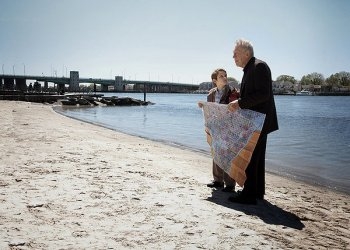 Have you considered getting a satnav?We want Oskar and his mother and all of New York City to move on; that's the healthy thing to do. Oskar's expedition across the city isn't simply a means of discovering the purpose of his key. It's also how he learns to trust the world again. Until he meets his grandmother's renter, Oskar insists on walking everywhere because he believes public transportation is an easy target for bombings. Only through positive reinforcement and a lot of courage are the two able to continue through their journey together.

One thing I found particularly egregious in this film is the way it peppers 9/11 imagery throughout, almost in defiance of the long stretches in which Oskar grieves over his father. Seemingly innocuous scenes of (for example) Oskar deciding where to go next are punctuated by airplanes flying behind buildings or paper debris floating about or even the blatant image of a falling man. It's almost as though the film doesn't trust us enough to instinctively know what the hell it's talking about.

This makes me wonder if Loud/Close is treating its audience the way Oskar's father treats him. In flashbacks, we see how Thomas plays logic games with his son to keep his mind active and teach him to never stop looking. So we're always meant to keep our eyes on the periphery, looking for clues that might help solve Oskar's riddle. But when we do look to the periphery, all we see are references to 9/11. That day is pervasive in this film, and it's constantly threatening to creep back into the forefront of the story. At the same time, it's clear that Oskar doesn't quite understand the world sometimes, and so when we see a slow-motion shot of a vase falling and breaking on the floor, we don't know what that's supposed to mean, because Oskar doesn't know what it means. It's clear the film is trying to include us in Oskar's game, but instead it just becomes needlessly obtuse.

I'm finding it difficult to recommend anything about this film. While the main plot is certainly interesting, it is constantly sidelined to make way for another 9/11 pity party. Eric Roth's script over-complicates Jonathan Safran Foer's perfectly tight story about a boy dealing with the loss of his father. The result is a production that trades an uplifting story for a maudlin display of overcooked sentimentality.

There's nothing left for me to praise but Max von Sydow. He says not a single word, but still he turns in one of his best performances in recent years. If there's any character that truly embodies the tragedy and loss felt on 9/11, it's his. He speaks through pen and paper, and yet somehow he becomes even more expressive than the child who refuses to shut up. Sydow's scenes with Oskar are what really bring this film to life. It's just a shame that the filmmakers clearly felt more compelled by emotions and images we've all seen a thousand times already.

MINORITY REPORT: Do you think this kid made the Asperger's/Jeopardy! connection? Or is he going to be eating breakfast one day five years from now and suddenly realize 'Hey, wait a minute...' - Martin R. "Vargo" Schneider