EXPECTATIONS: Roman Polanski is one of those directors whose name always makes people turn around and take notice whenever it's attached to a film, but that may be less because of the quality of his work and more because every time we hear it, we're all secretly wondering if this is the year the US Government finds a way to haul his ass in. I imagine there's some guy at the FBI who has been shaking his fist up at the sky screaming "I'll get you, Polannsssskiii!!!" every time he's gone to the theater for the past thirty years. Anyway, this latest effort by Polanski is something I'm looking forward to, because it features three of my favorite people working in film today. And Jodie Foster too, I guess. 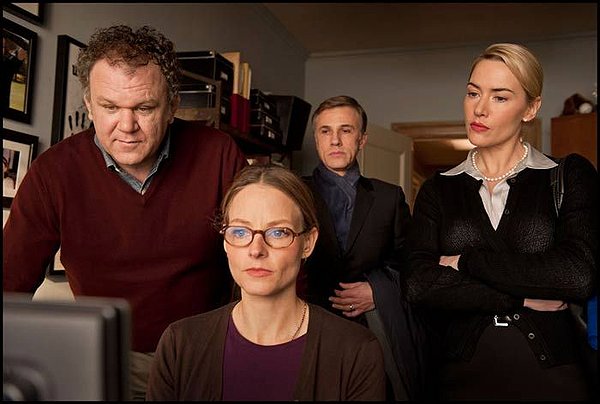 Hey guys, let me show you some scenes from The Beaver.

REALITY: Here on the internet, we have this recurring joke where we take ridiculous things that people complain about and broadcast them everywhere so we can all feel superior whilst trying to ignore the fact that we complain about those exact same things all the time. We're talking about things like "I really want some granola, but Trader Joe's is too far to walk" or "Man, Taylor Swift just re-released her last album with five new tracks! Now I have to buy it all over again!" This phenomenon is known as "First World Problems," or more bluntly and perhaps more accurately, "White People Problems." I mention this for two reasons: First off, I am genuinely upset about the Taylor Swift thing, and secondly, Carnage is basically "White People Problems: The Movie."


Carnage follows the meeting between two sets of New York City parents following a fight between their 11-year-old sons. This is a very interesting class conflict between the affluent, white Manhattanite Alan and Nancy Cowan (Christoph Waltz and Kate Winslet) and the less-affluent-but-only-slightly, whiter-but-only-slightly, still Manhattanite Michael and Penelope Longstreet (John C. Reilly and Jodie Foster). The conference starts off cordially enough, which means it's extremely bland. The first minutes of the film are almost painful to watch, because these people are just horrible. They're obnoxious and boring, they hate themselves, they hate each other, I hate them, but everyone involved is pretending this isn't true. It's like dinner with your family. Yes, I realize that this is part of the movie's point, but when your film is only 80 minutes long, it's a little risky to alienate your audience for the entire first quarter. Of course, in true Who's Afraid of Virginia Woolfe style, the two couples eventually become honest with themselves, and start to diverge into their frustration with their unhappy lives. 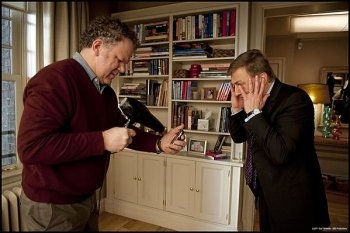 AGH NO! You're reminding me of Funny Games!In this regard, the film succeeds greatly. There are terrific performances by all four members of the cast, all of whom seem to be tailor-made for their roles. Waltz continues successfully on his quest to beat Alan Rickman for the coveted "Hollywood's Best Glarer" award, and John C. Reilly's mitigating peacekeeper brings the much-needed comedy to this dark comedy. Watching these two men dance circles around each other is so entertaining, it just sadly reminds me of how many people will forever think of them as "The Jew Hunter" and "That dude who hangs out with Will Ferrell." I'd also like to make a point that I think it's entirely likely that casting director Fiona Weir read Ian's review of The Beaver, because there is something utterly brilliant about casting Jodie Foster as the token annoying bleeding-heart liberal rich white lady who looks at the camera and screams, in total seriousness, "Of COURSE I understand the suffering in Africa!"

As for Winslet, I've loved this woman since Titanic came out, right around the time pubescent hormones decided to punch me in the face. (For this reason, I will be first in line for the 3D re-release.) I will see basically anything that Kate Winslet is in; I will root for her at every awards show; I even once sat through this horrible animated version of A Christmas Carol just to hear her voice next to Sir Nicolas Cage's. I've long championed Kate Winslet as one of the most talented and beautiful women working today, and thanks to Carnage, I have seen her vomit profusely onscreen.

As a dark comedy, Carnage works well enough. It is dark, and it is comedic. It is also brilliant as evidence that two men, no matter how different or how competitive, can settle basically anything over a bottle of scotch. However, as a satire, it fails because it basically lacks any and all subtlety. In fact, it's worse than blatant about its message: It's blatant about its message while still trying to convince us that it's nuanced and ingenious. Hey look, the adults are pouting and throwing tantrums and now they're the ones acting like children! And it's all because of how polite they tried to be! Well, I guess civilization can only do so much to control the violent tendencies of human nature! That's totally not a weird message to have coming from a convicted rapist, not at all! We get it, Polanski. By the way, did you ever notice that if pro is the opposite of con, then congress must be the opposite of progress? Look how damn clever and witty we both are!

This is really why Carnage turned me off, despite all of its fantastic performances. This is a film designed to make the audience feel smarter and superior. It's a film based off of a play, and it never stops reminding you of this. It's intellectual masturbation, essentially. The film makes fun of rich pacifist yuppie types, but in all honesty, that's exactly who it's designed for. The movie is basically made so that people watching can pat themselves on the back and say with smug superiority, "I get it. I'm quite intelligent, you see." This is Fight Club for rich people, dammit. Actually, this movie would be better if they all just fought. I'm guessing Winslet would destroy the other three, though.

MINORITY REPORT: How many of your tax dollars are being spent on the Polanski witch hunt? The FBI is probably helping finance his movies at this point. Hell, he's probably surrounded by undercover agents everywhere he goes. In fact, wasn't Jodie Foster in the FBI at one point, or was that just a movie? - Ian "Professor Clumsy" Maddison