EXPECTATIONS: It's always exciting for us when a movie is not screened in advance for critics. For a brief moment, the high and mighty "professional" critics are knocked down to our level. There's a sense of brotherhood that comes from realizing that critics of all calibers started out the same way: buying tickets at the local multiplex and sharing the same sticky floors with moviegoers nowhere near as stuck-up as we are. It's so touching that Professor Clumsy almost talked me out of writing a program that e-mails the words SUCK IT to Peter Travers every half-hour. 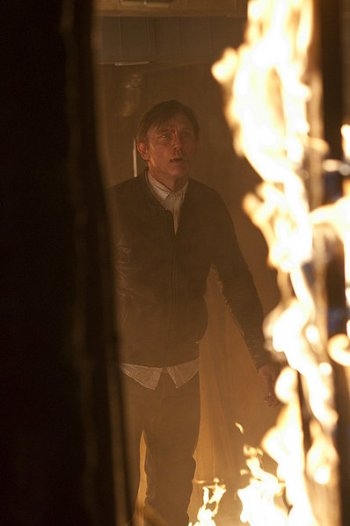 Oh my God! That hairless cancer-riddled X-Man has set my house on fire again!REALITY: Oh, right, I remember now: When a movie isn't screened in advance, it's because even the people who made it think it's terrible. We all have to suffer together as one. Like a Band of Brothers thing, except we've learned absolutely nothing and David Schwimmer isn't there.


Dream House follows writer Will Atenton (Daniel Craig) as he quits his job as an editor and moves his wife Libby (Rachel Weisz) and his two daughters to a house in suburban Connecticut. When mysterious visitors and some punk teenagers who are never heard from again invade his home, Will learns that his new house was the scene of a brutal murder of an entire family some five years ago. (By the way, this is the third movie I've reviewed in the past two months about horrible things happening to a couple after they move into an old house. What Hollywood is saying is: If you're not being raped, murdered, or taken to the underworld by tiny demons in your current place of residence, STAY THERE.)

As he investigates further, Will discovers that he is actually Peter Ward, the accused murderer, who was held in a mental home for five years, then released for no reason. If that seems like an unnecessary spoiler, I can justify it by saying:
A) It's all over the trailers.
B) They reveal this "twist" smack dab in the middle of the movie. It's not a twist so much as it is plot development.

This is the biggest flaw in the film. It reveals its painfully obvious hand right in the second act, then just wanders around like a zombie for the rest of its runtime. By giving us the big secret so early, the movie removes any and all drama it may have had. No matter how you look at it, it disappoints. It's a horror movie without any scares, or a thriller without any suspense. Honestly, it's a movie without substance, just a doddering mess that isn't even fun to look at.

How does one make movie this bad with such a great cast? Everything Daniel Craig says is strangely stilted, as though he's being mildly formal with the audience the entire time. Weisz and Naomi Watts just deliver their lines, ready for the shooting to be over. They're better than this. Everyone here should be better than this. 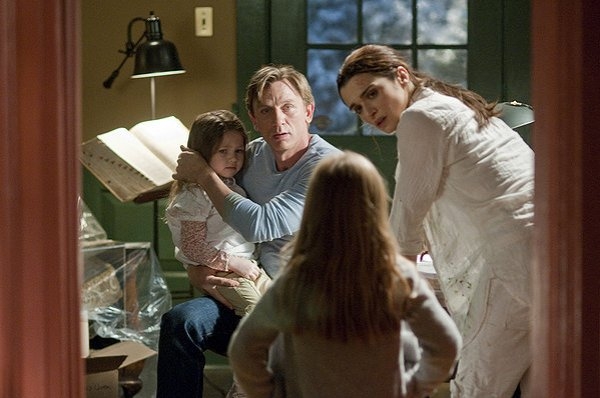 Get out, would you? I just discovered I used to be a serial killer, this is a very delicate time for me.

I'm sorry, dear readers, I feel like I'm failing you. When I see a terrible movie, you expect me to tear into it brutally, but the truth is I can't do it this time. There's just nothing here. I have nothing to work with. This is a film almost entirely devoid of content. Every contrived plot point is delivered ten minutes too early, there's no sense of urgency or caring about any of these characters, and the whole thing feels like it was written in about a day to fulfill someone's contract. It's just... bad. And not in the interesting way most movies are bad, where it's fun to talk about how bad it is. This is one of the few films I feel is just an utter waste of celluloid. (Or, I guess, digital memory, depending on your theater.)


The ever-reliable IMDB trivia page for Dream House claims that director Jim Sheridan reportedly lost control over the film and was unhappy with the studio's final cut. However, by releasing the film without screening it, the studio showed it has no faith in it, and the higher-ups probably want to blame Sheridan. The truth is, this is a project that needed about three more script revisions before it got the green light, and it wasn't shown in advance because they were worried all the critics would have forgotten it before they wrote their reviews.

MINORITY REPORT: My dream house would feature a mother-in-law suite with its own fully functioning movie theater. But it only shows one movie: Dream House. - Joseph "Jay Dub" Wade