I wish I could applaud AMC's new spinoff of the wildly popular The Walking Dead for taking big risks, but in it simply strays too far from the formula established by the main series.

Fear the Walking Dead features an entirely new cast of characters. These guys are corpses, but they move around and moan. It's ridiculous. Their flesh is all discolored and gross. They shamble towards living people and bite them. Who the heck thought of this nonsense? 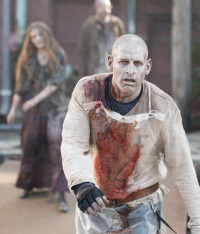 Yeah, okay.I don't like these characters. They are dead humans and they don't really talk at all. Some of them have bunches of guts hanging out. I think one was even missing an arm. None of them have good haircuts.

If you saw one of these undead characters in real life I assure you that you would say something like "What the heck" or "Oh my" because they are simply that disturbing in both appearance and behavior. In fact, you would probably get away from them as quickly as possible.

I sincerely apologize to anyone with delicate sensibilities who might have been rattled by my harrowing, evocative description of this theoretical encounter.

By cramming such an inexplicable, fantastical group of characters into the Walking Dead universe, Fear the Walking Dead has diminished this once-great franchise. My suspension of disbelief has been shattered.

These guys are all deceased and they wear clothes that haven't been washed in a very long time. Sometimes the zombies get near a non-zombie and that's when they (the zombies) bite (the non-zombie). It's like they're trying to people. For... ? No explanation is given. Terrible.

I was hoping that Fear the Walking Dead would expand the scope of the Walking Dead world we all know and love. I wanted to gain a new understanding of the broader Walking Dead plot by seeing events from a different perspective. Unfortunately, the sicko writers behind this new series thought it would be a great idea to add walking corpses.

Now, I'm not saying that Fear the Walking Dead is a lost cause. There's still plenty of time to turn things around. In my opinion, improving the show would involve:

This one's easy. Include all the things that we love about The Walking Dead. That's a very popular show, you know. People would love this.

Get Rid of These Zombies

These undead characters were a terrible idea. Sorry, but they were. Imagine how much more time we'd have to focus on the good stuff without them.

Will the writers of Fear the Walking Dead heed my advice, or will they allow their stubbornness and pride to drive the show to ruin? Time will tell. I just hope they do something about the dead character who tried to bite people. I didn't like that one.