Shut Up About Blogs Already 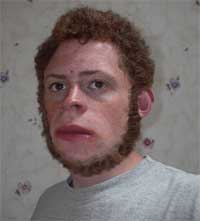 This man runs a blog about politics in Washington.

CNN: The darlings of the blogosphere - Like so many other 20-somethings hoping to mine the Internet gold rush of the late 1990s, Mena Trott was thrown for a humbling loop by the dot-com bust, yet still craved stardom. Her unassuming husband, Ben, just wanted another computer programming gig in Silicon Valley's depressed job market. The couple's odd chemistry cooked up Six Apart Ltd., a startup that has helped popularize the "blogging" craze, with millions of people worldwide maintaining online personal journals that dissect everything from politics to poultry.

MSNBC: Penn Media to Convert 50 E-Zines to Blogs, Positioning Them as the Largest Publisher of Consumer Trade Blogs - Penn Media announced today that it will publish fifty of its flagship owned and operated e-zines as Blogs, positioning them as one of the largest publishers of consumer trade blogs. It has contracted with Pheedo, Inc. to guide them through the evolution and provide RSS and Weblog advertising services.

No matter where you go, no matter what news site you read, no matter what television channel you switch to, no matter what radio station is on, we, the American people, are constantly reminded about this exciting newfangled device called "a blog." The news media has adopted the word "blog" as their "horribly annoying catchphrase of the decade," opting to drone on and on about such an exciting topic nonstop until the Internet decides to take its own life. Blogs turn any average drooling idiot into a seasoned news reporter! Blogs bring the world together and share intimate moments with complete strangers, most of which who are probably masturbating! Blogs allow fair and balanced news reports by offering both sides of the political spectrum equal chances to make up lies and get away with it! Blogs can cure cancer! Blogs will colonize space! Blogs will transform the human race into a hyper intelligent race of androids able to travel through time and shoot laser beams from their eyes! What on Earth can't blogs do? BLOGS BLOGS BLOGS! 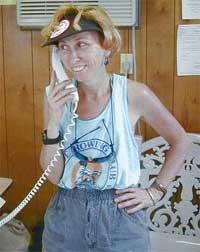 This woman runs a blog about movie stars in Hollywood.

Hey news media, I'm talking to you: nobody on the Internet gives a shit about blogs anymore. Shut up about the damn things already. Internet users were well aware of the whole blogging trend about a decade ago, and the rest of America (the folks who learn critical parenting advice from Dr. Phil and ask their doctors about each and every medication they see advertised on television) had the concept thoroughly hammered into their brains early last year. Here's a proposal for you, news media: instead of constantly throwing cake icing on a mound of dog shit and presenting it as a new and exciting and fabulous story about the wonderful world of blogging, one we've all heard rehashed countless times before, just copy and paste the following "news" story of mine. This should make everybody happy the next time some delirious senior executive sends out an email to his entire staff, convinced the American public really wants to hear another damn story about blogging:

PERSON USES INTERNET TO DO SOMETHING THE INTERNET WAS CREATED TO DO - Someplace on the Internet: Somebody somewhere used the Internet to accomplish one of the primary goals of the Internet today, to share data with large groups of people. This genius act of uploading data to a location where other people could read it was heralded as a "groundbreaking act of incredible power and limitless freedom" by somebody who works in the cubicle next to us. People around the Internet rejoiced at the news, declaring this creative act as "a new dawn of the Internet."

"I totally can't believe it," admitted one stunned Internet user who uses the Internet on the Internet. "Somebody writing some stuff on the Internet and placing it in a location where other people besides him could view it? That seems magical, almost impossible! What's next, a way to instantly message other Internet users and send them comical smilie faces depicting various emotions?"

The announcement of this web log, or "blog" as the hip and underground culture labeled it, has sparked the interest of users all across the globe. Petr Gregoriv, an Internet user in Moscow, recently held a press conference to declare his intent of beginning his own blog. On the Internet.

"I have dreamed of this day for a long time, ever since I was a child who tried over and over to use the Internet but couldn't because it was 1978 and it hadn't been invented yet," Gregoriv commented to a stunned audience of the press and scientific community. "But today, well the technology here, and there's nothing stopping me from revealing to the entire world what Modest Mouse song I'm listening to and what my current mood is." He then paused and wiped a tear from the corner of his eye. "And my current mood is 'happy'."

Media analysists have predicted nothing but a positive future for the Internet on the heels of this discovery. "A universe of data in a journal format, updated so often that it appears to be live?" Questioned a top scholar of Internet studies at Internet University. "It's such a revolutionary concept! What on Earth would we call it? What name could we possibly use to refer to these journals that are updated live?" 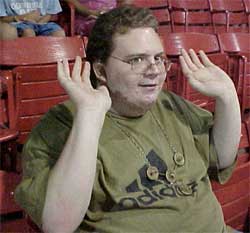 This man runs a blog about gun control in Delaware.

The media claims the biggest and most revolutionary lure of the blogging scene lies in its ability to turn any idiot with a computer into a reporter. We've been presented with the same shreds of proof over and over again: some soldier in Afghanistan takes pictures of dirty little kids hugging charred logs of plywood dressed as dolls, adding a couple sentences of bittersweet reflections regarding the US war on terror below each photo. A teenager in Raccoon Esophagus, Texas writes an update protesting his principal's refusal to let him attend the school prom dressed as a bloody Jesus Christ, hoisting a 90-pound crucifix on his back. Some obese balding man fired from the Republication National Committee offers an exclusive "behind the scenes" look at the buffet table at a conservative fundraiser while copying and pasting his groundbreaking opinions from Rush Limbaugh's website. What can blogs offer that the average newspaper or magazine editorial can't, besides a complete lack of accountability and journalistic integrity?

Maybe it's just my cynical, bitter nature, but I fail to understand the media's obsession with blogs. They're not new, they're not revolutionary, and 99.9% of them do nothing but take up valuable bandwidth debating which Dragonball Z character could best beat up Superman if they teamed up with Sailor Venus. Christ, even Wired has fallen prey to the lure of blog obsession, and that's a magazine so anti-trendy that they go out of their way to write about the most least interesting things possible, just to make sure they never accidentally slip up and become popular. Each month features a hot new paragraph of bland, uninteresting garbage scooped straight from the grease trap of various unknown blogs throughout the Internet and crammed into a print publication's scrawny sidebar. You know, for those of us who somehow installed a Proximitron filter to block out "dull garbage" from our webbrowsing experience.

The simple reason the term "blog" is on every suit-and-tie-wearing idiot's mouth is simple: the media wants to be hip. It doesn't matter if they're recycling Internet crap which hit its peak popularity in the mid-1990s, it's news to them as long as the other networks have failed to thoroughly beat the term into the ground and pile drive it into the shattered shores of painful overexposure. Hey, have you guys heard about this crazy "Bubba Rubb" dude? What about "all of your bases?" How about this hilarious site called E-Bam's World which posts tons of funny original content like "man falls off motorcycle #742" and "Michael Jackson soundboard #1124"? The news media is perpetually five years behind the Internet's popularity tide, and by the time local news channels begin reporting on the latest uproarious new digital trend sweeping the AIM chatrooms of prepubescent America, we've already suffocated and buried it under a pile of "hello my future girlfriends" and "Tunac Tun Tuns." And don't even get me started on Jimmy Kimmel.

So here's a little tip for all the vigilante 60-year old news reporters prowling websites on their son's dialup AOL account: don't bother. I have yet to discover a single television or radio show able to report on the Internet without spewing the same tired cliched crap every other television and radio show has dutifully reported on for the past six months. I guess it's pretty sad that the Internet, by far the most factually incorrect, illiterate, immature, idiotic form of communication in the history of mankind, seems to be setting the trends which other media outlets vigorously pursue. Please do the world a favor, news media: stop latching onto an Internet concept or pseudo-celebrity and then promoting the hell out of it in a futile attempt to trick the world into thinking you guys are hip to these super-bitchin' techno trends on the k-rad information superhighway. Leave us lonely and pathetic Internet wretches alone with our endless rolling sea of one-hit wonders, tragically unhip anti-celebrities, and cutting edge software which stopped cutting years ago. This crap is bad enough on the Internet; the last thing we need is to see it plastered all over our newspapers and television screens.