Thursday, Feb 02, 2006 by Bob "BobServo" Mackey
UNDISPUTED FACT: When you eat a creamsicle, you are eating a popsicle THAT IS PREGNANT 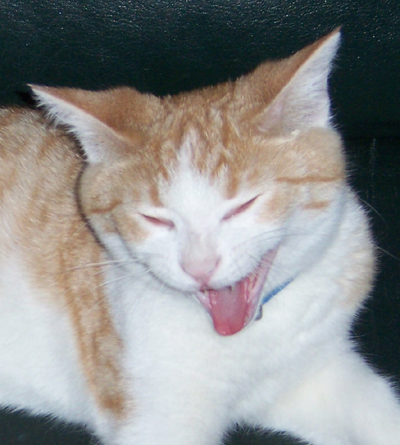 You Asked For It

On the last Daily Dirt, I asked for your questions on pets, relationships, and pet relationships, and the response was so overwhelming that the internet actually ran out of 1's and 0's for a brief period of time! Luckily, I kept my rations of 1's and 0's from the last cyberwar, so I can answer your most urgent questions about the matters at hand- Or PAW, in this case!

I have recently purchased two baby spiders and I love them very much. One is a Brazilian Fire Red tarantula named Robocop and the other is a Goliath Birdeater spider named Charles Bronson. But I have a problem. When I give Robocop baby crickets to eat (because he is a baby spider) he waits one, two, sometimes even three days before eating them! But Charles Bronson eats three or more baby crickets (slightly bigger baby crickets because his species is THE LARGEST SPIDER IN THE WORLD) as soon as I give them to him! Sometimes he impales a cricket on each of his fearsome mandibles, thus cramming his tiny maw with TWO CRICKETS AT ONCE! I am afraid that my baby spiders have self esteem problems and are respectively under- and overeating to cope. I don't want my baby spiders to become anorexic and grossly overweight! All their spider friends at spiderschool will mock the m and they will grow up to post on Dragonball Z forums about the correct method of producing Ki blasts and listen to rap metal! Please help me OK THANKS.

Ricky,
The problem here is that Robocop cannot possibly exist in the same time period as Charles Bronson, and giving your pets these names has no doubt affected their self-esteem with a space-time continuum flux! Can't you see they're from two entirely different worlds? I recommend giving your spiders names of fictional characters closer to each other in time and proximity, such as "Steve Urkel" and "Carl Winslow." Then maybe you can see what it would be like if Steve ate Carl's face, because ABC sure as hell isn't going to be releasing the lost episode of Family Matters where that actually happens.

My cat likes to piss on everything. I think he's just being territorial. Do I need to start pissing on him to show him I'm the boss?

Damien,
If you pee on your cat he will start peeing on himself to recover ownership. And you don't want to have a cat that smells like two kinds of piss.

I have been trying really hard to get my adorable pet snake to hang out in a cardboard box with a cute little hamster. I've got the cardboard box bit down (it looks good). The problem is that Snaky keeps eating the little friends I buy for him. This trial-and-error process is getting rather expensive, and I'm running out of hamster names as well. Can you please help?

Danielle,
What you need to do is this: stage a fake murder scene in the cardboard box before you put the two animals inside of it. Outfit them with tiny deerstalker caps and tell them they have to solve the mystery. Crime-solving always brings organisms closer together!

I have two big dogs, three small dogs, three regular-sized cats and two cats larger than the three small dogs. Needless to say, every minute they are within close quarters is another minute that could explode into an epic confrontation. How can I make my animals not hate each other?

Confucious,
Your house must smell bad.

Next Time, on THE DIRT

In the next exciting episode of The Daily Dirt, it'll be Q&A time again, but the topic is now GIRL TROUBLE! If you have GIRL TROUBLE, or are TROUBLED about being a GIRL, I want to hear your questions! Just e-mail bobservo@somethingawful.com, and you may find yourself incriminated on the next non-mandatory installment of... THE DIRT!