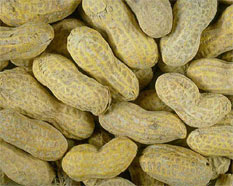 They are everywhere and they are lethal.Just about everyone has an allergy of one form or another. Some start sneezing because of pollen while others have a sort of respiratory meltdown when they eat asparagus. I have a mild milk allergy. If I chug a glass of milk I sneeze for about five minutes straight afterwards, which is no big deal since I don't particularly like to drink milk. Recently I became aware of a segment of the population that is afflicted with a peanut allergy. We're not talking a little wheezing or a Kleenex full of sinus juice, we're talking if they so much as look at a peanut through a telescope their faces melt off. What's worse for these people is that the brown menace is everywhere. Just about everything on the planet contains peanuts, you just don't notice it because coming in contact doesn't cause your lungs to turn inside out. Peanut butter obviously contains peanuts, but did you know that peanuts are also in most types of bread, candy bars, cookies, wigs, eyeglasses, hand guns, almonds, and even parachutes? Well they are, and for the people with a severe peanut allergy this is like all of these items contain knives that stab them in the chest.

World wide an average of 100 people die each and every year from an allergic reaction to peanuts or peanut-based products. That doesn't seem like a very significant figure, but for those who have loved ones and especially children with a peanut allergy this number is irrelevant. Peanut allergies are serious!

To better educate myself I have been frequenting a peanut allergy forum and discussing the illness with them. One thread featured them lobbying to remove menu items from Pizzeria Uno so that it was a "peanut and tree nut free restaurant". When they received e-mails saying that Uno could not emphatically guarantee the contents of their food, one frustrated mother wrote:

Well if that isn't the biggest hunk of bologna I've ever heard. I know some of the restaurants have barrels of peanuts but the on [sic] at the Burlington Mall doesn't. All I ask is that they discontinue the peanut butter dessert.

They organized a mini-letter writing and call-in campaign to get Uno to take the offending nuts off the menu, and they have been meeting with success with other products and companies. A number of them have managed to ban peanut butter either completely or almost completely from their school systems. Of course some annoying brats who just MUST have their satan's butter and jelly sandwiches can cause problems, but the Peanut Allergy crew is there to re-educate them:

I know of one school that had such a parent, "my child will only eat pb and I demand that she gets it". The school gave this child a special room to eat in. Well this child had a younger sibling who turned out to be diagnosed with PA. A full blown miracle occurred because suddenly this child no longer required pb. Can you imagine?

Even if this form of education works and the peanut allergy people manage to remove peanuts from every school, there are still other menaces in the terrible world.

In two of our local grocery stores I have seen signs that show a peanut with USA stamped across them. Then on the bottom it says Crack first before you pop.

I almost $hit my pants when I saw this. They were in the soda and water isles.

These are the little signs that they have sticking out like the little grocery coupons do.

Renee, I'll tell you what next. I am personally launching a campaign here and now on Something Awful to raise awareness about Peanut Allergies. I will crusade in your name and the name of every other person who suffers from at the merciless hands of a peanut until Agent Orange has defoliated the last acre of peanut crop-land.

Click the image to see a larger version of my "totally radical" poster!I propose first a marketing campaign similar to the anti-drug TV spots seen during the 1980's. You need to give living "peanut free" a cool and totally hip image that will appeal to kids. I'm no graphic designer, but I think this mock-up of a poster I've put together would look great plastered on walls across America. Heck, you could probably even sell them to raise money for the next phases of the campaign. These posters would of course be only one part of the overall marketing campaign. We would also do the aforementioned television advertisements and even radio advertisements.

Father: Son, I wanted to know how…what's that smell?
Son: Nothing…dad…I…No, please don't look in my back pack!
Father: What's this son? Have you been eating peanuts?!
Son: No I, well this kid at school asked me if I wanted to take home a couple and there were a lot of people who were doing it, so I didn't think it could hurt anything.
Father: Peanuts are deadly! Your friend gave you a loaded gun and you're just lucky I found it before it went off. Peanuts are a tool used by the Jewish controlled world government and secretive Order of the Illuminati to manipulate developing minds like yours. I'm going to flush these down the toilet and if I ever catch you using peanuts again I am going to cut both of your hands off.
Voice Over: Brought to you by the society for the elimination of peanuts and freedom from the Zionist American Police State.

Once these ads begin to take hold you will notice a real drop in peanut consumption. Kids will stop thinking that eating peanuts makes them cool and start using their brain before they "pop a nut" as they like to call it in their "street language". If you eat fewer peanuts it's a proven fact that you are far less likely to die or make anyone around you die. But the ads alone can't do the trick, we have to be proactive throughout the entire crusade to eliminate peanuts. Once the public has been educated about the dangers of using peanuts and using them has been stigmatized we will begin to ostracize those in our society who continue to rely on a "peanut fix". We will also take this opportunity to restore the "white" in "Red, White, and Blue" and move all of the coloreds to an island off the West Coast called Peanutopia. 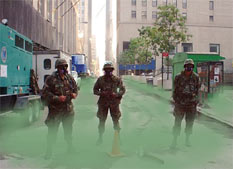 National Guardsmen will oversee the fumigation of urban centers with BTH to depopulate peanut-carrying vermin.By electing officials who support the creation of a Peanutopia state and the removal of minorities to the island, we will set the stage for a complete Federal ban on peanut products. Once the ban is in place and the blacks and Jews are on their island we can set about dismantling the black-market peanut infrastructure.

The number one smuggler of peanuts may be in your very own back yard! I'm not talking about Mexicans, although they are bad too and during this phase we will be moving the Mexicans to Peanutopia. I'm talking about squirrels. Squirrels care nothing for our children and are willing to scamper and frolic around with a ticking time bomb clutched in their chubby cheeks of evil. Luckily science has already provided us with a solution in the form of Benethyl Tri-Hydrocyanate. While BTH is fatal to humans as well as squirrels, squirrels have not yet designed a working gas mask, and we white Americans have.

The squirrels will frolic no more and their capering will be done only within the 1-3 hour time period that it takes for the ground traces of BTH to work their way through their bloodstream and crystallize in their rodent kidneys. It will be a peanutocalypse, and who will be laughing then? Not the contraband growers and not the Jew-run banking industry.

So let's take a look at the world we'll be living in at that point.

There will be only scattered and personal peanut farms for subsistence peanut junkies.

White America will be restored.

The Zionist shadow government will be on the brink of collapse.

The world will be almost completely safe for those who suffer from peanut allergies.

Once our Sturmverband Sonderkommando are dispatched to provide a final solution to the remaining peanut growers (and agents of the Zionist Autocratic Collective) we will have only the legacy of the peanut to contend with. This may surprise you, but some people (like Renee) are so allergic to peanuts that even hearing the word peanut or seeing a picture of a peanut will cause their skin to begin bleeding. If left untreated or subjected to prolonged exposure to say, a 48 hour "peanut" audio looping experiment performed at Dachau, their entire epidermis will erupt into boils that eventually burst and cause them to bleed to death. 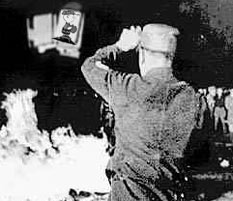 A member of the Sonderkommando throws a collection of the art of Charles Schulz into a raging bonfire.Therefore the triumphant Sonderkommando will be reenlisted to travel across America collecting any media that contains direct or indirect references to peanuts. Even copies of this manifesto will be tracked down and immolated. Harboring peanut material will be considered a seditious and even treasonous capital offense. There will be great peanut burnings (attended of course only by those who are not peanut allergic) and the funeral pyres of the peanut will light the bellies of the clouds from Washington D.C. to Washington the state.

I will not rest until the last death-peddling peanut farmer has been driven out of business by a global boycott of any product containing peanuts, from Reese and his blasted cups to Jarvis and his blasted peanut-polymer heart valves. The name of George Washington Carver will be systematically purged from the annals of history and his villainous remains will be exhumed and launched into space. Dictionaries that do not conform to our standards will burn with the fire of our righteous fury. On that day Renee and the rest of the peanut allergy sufferers can breathe free knowing that they and their offspring will walk the earth and have plenty of peanut-free living space.

Photoshop Phriday You Can Lick

Hello, it's Livestock. I'm here to let you know that Zack is a drunkard and he once punched an old woman. But that's not important. The real reason I'm here is to tell you what the gigantic title text above this paragraph says. You guessed it, it's PHOTOSHOP PHRIDAY. This week the topic is postage stamps. Case in point: