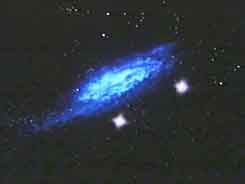 Cheesy graphics - the final frontier.Picture this: it's your twenty-first birthday. For twenty-one long years you've been good - you've never had so much as a drop of alcohol. You pick up your best friend in the new car you bought to commemorate this new chapter in your life, and the two of you head to a bar. You toss back a few drinks, share some laughs, and have a great time. Then you and your best friend get back into the car. You realize that you're a little tipsy but you don't think you're too drunk to drive. On the way home, you swerve a little bit, but since the roads are empty you don't pay any heed. As you turn onto your street, a woman and a dog dart into the road. You try to avoid them but end up hitting them both and crashing your car, sending your best friend flying through the windshield. You are unharmed, but as you crawl out of the wreckage you see that the woman and the dog are both dead... and that the woman was your girlfriend and the dog was your dog. There's nothing more you can do for them, so you rush to your best friend's side. He's mortally injured and he asks you to come closer. You take him in your arms and his blood flows all over you. In his final breath he tells you that he has AIDS and now you do too. Despite all this, you have nothing to complain about because you fucking haven't seen "Nukie." Watching this movie was the most painful experience of my life, with the possible exception of when I had to watch it again. I should mention right up front that this monstrosity has a PG rating which only serves to prove that it is a deliberate attack on our children and their precious brains. I'd say that I hate director Sias Odendal with all my might, but the blame really falls on the shoulders of screenwriter Benjamin Taylor. Well, except that the script was based on an original story by director Sias Odendal, so it actually is his fault after all. That's just as well because I was going to blame him anyway. 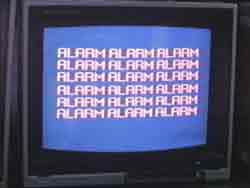 I couldn't make this up if I tried.The horror begins with a couple dumb click-n'-drag lens flares moving awkwardly in front of a outer space-themed clipart. It is the most visually appealing moment in the entire movie. I say "visually" because you still have to endure the voices of Nukie and Miko, two alien brothers who are traveling as balls of light. The voice acting is one of this movie's worst aspects, in that it not only made my ears bleed but it actually caused the rivulets of my blood to sprout ears and then made those ears bleed. Nukie and Miko have identical voices and they both sound like a retarded British orphan shouting into a tin can. As they approach Earth, Nukie is frightened because of "the wind and water." Miko, however, is having a great time. They both get sucked in by the Earth's gravitational pull and crash. Not so fun now, is it, Miko, you little shit? We cut to the "Space Foundation," which we know is the Space Foundation because whenever there is a cut to it we get to see the exact same shot of a some building while a narrator explains that nothing of any importance is happening. The narrator has a great speaking voice - a lot like Leonard Nimoy if someone punched him in the throat for an hour or four. Inside, two technicians, played by actors who didn't quite make the cut at the "Mr. Ice Cream Man" auditions, make incredibly vapid comments about two UFOs on their radar screens. At this point I'd like to take a moment to explain the computer setup over at the Space Foundation (note that I didn't say "NASA." Sure, they may use equipment, vehicles, and uniforms with the NASA logo on them, but this is a different organization altogether). The control center is a bunch of monitors that are programmed for one of two functions:

1) Flash totally useless information and random phrases that no government organization would ever need their computers to display,

2) Flash lights constantly until everyone in the audience has seizures and swallows their tongues, so they can't tell anyone else how awful this movie is.

All of this is regulated by the Electronic Digital Data Intelligence, EDDI (get it? It's like the name! How delightfully plagiarized). Like all things that shouldn't in this movie, EDDI speaks fairly regularly. Its voice is much like the narrator only with a metallic effect added. Oh wait, he sounds EXACTLY like the narrator with a metallic effect added! The brilliant technicians deduce that the first ball of light, Miko, is going to land somewhere over Miami or possibly California. Part of the difficulty they have telling the difference may stem from the fact that the light ball, which appears to be about two feet in diameter, appears on their radar as approximately the size of Canada. Miko lands and they pinpoint his location to Miami Beach, where the Space Foundation is conveniently located. Moments later, they pinpoint the location of the second light ball, Nukie, to all of Central Africa. Their satellites are powerful enough to say exactly where Miko landed, and later actually bring up visuals of specific individuals on the other side of the globe, but they can't narrow Nukie's location down any further than Central Africa. Brilliant, just brilliant. 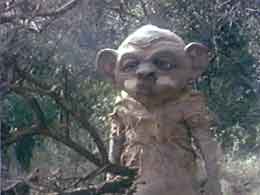 But this is a movie about Nukie, after all, so we cut to the little freak himself. He's laying among a pile of rocks in the dark. Unfortunately, he gets up, allowing us all to see his hideousness. As if his voice wasn't bad enough, Nukie looks like something that would have come out of Jim Henson's Creature Shop if Jim had suffered a massive stroke and irreparable brain damage. He's ugly enough as it is, but he gets exponentially more disgusting to behold when he gets wet. Luckily he only gets wet when he cries, and he only cries when he's sad, and he's only sad for eleven-tenths of the movie. Then his nose runs like a mucousy Victoria Falls, creating a Hitler moustache of revulsion that is only made worse by the streaks of ugly that run across his bloated face from his torrential tears. Nukie communicates with Miko by bouncing sound waves off the moon (seriously). Their conversation goes thusly:

Poignant exchanges like that comprise roughly half the dialogue in "Nukie." Most of the other half is made up of, the quotes "bad god" and "there's nothing unusual here, Dr. Harvey." Nukie wanders around for a while, explaining sixty times that he has to find Miko, then bitches and moans about it being too dark on Earth. And so he begins his central quest to piss off all of Africa. Meanwhile, back at the Space Foundation, the scientists discover that Miko is communicating with someone by detecting the signal on their "X-ray scanner." Yes, apparently sound now travels on X-rays. This movie blows. Just to pound that point home, the scientists ponder if Miko is an animal, vegetable, or mineral while simultaneously monitoring his heartbeat, breathing, and brainwaves. Damn those tricky rocks and their infernal heartbeats! This does raise an interesting question: why did they give him tranquilizers if they didn't know he was an animal? Oh, right, the whole "movie blowing" thing. I forgot. Fortunately, Dr. Glynn happens to mention that Miko is American property, prompting Miko to tell Nukie that he is in America.

Like a superball in a rubber room, we bounce back to Africa, but now it is daytime. Nukie stands on a hilltop, staring directly at the sun, bitching and moaning about it being too bright. If you don't hate him yet, you will. He runs across a variety of animals and tries to talk to them all in English. The giraffe and rhinos don't talk, but the lion and baboons do. It's a good thing lions and baboons aren't stupid mutes like that fucking giraffe. The "baboon king" tells Nukie that his cousin Charlie, who lives among the humans, might be able to help him find America. Stupidity continues to ensue.