Welcome to the Cesspit of Crap!

Tuesday, Apr 19, 2005 by Rich "Lowtax" Kyanka (@TwitterHasBannedAllMyAccountsEver)
This is going to be the optional, freeflowing, train-of-thought pseudo-Livejournal full of half-assed ideas, inspiration, and anything else we feel like writing about but know isn't entertaining enough to warrant a full article or front page feature.
Today's Update 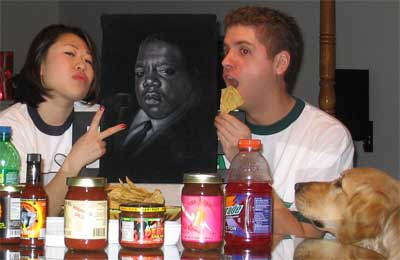 My wife, dog, and I eat chips with BIGGIE.I wrote today's update, "Staff Reporter and the Invisible Asteroid Invasion," as a kind of tribute to the more old school style of SA, when I used to write about goofy "news" articles and make the same predictable jokes over and over. I still like writing in this style, I just don't really seem to have the motivation for it these days. I wouldn't say my writing style has "progressed," but it seems to have rather just kind of gotten fat and stupid and lazy.

I remember how I used to have a bunch of energy years ago and loved to write. I could turn out two articles a day for weeks. Granted they weren't very good or well written, but I still possessed a lot of energy. Now it seems that my attention span has hit the shits and writing isn't as fun or exciting to me as it once was. It's more difficult for me to get motivated and really put myself into an article. I have no idea what it is; burnout? Disinterest? Lack of creativity? I don't know, but it's kind of unsettling.

So how do I reclaim this feeling again? You got me. I wish I could experience the same rush and excitement that I used to when I would think of some idea with potential, but those moments come few and far between these days. I still enjoy writing sometimes and think my new stuff is done better than my old work, but there's still some uncomfortable feeling, perhaps one of obligation to write, that it's more of a job than something done just for fun.

Work is the death of creativity.

On another note, I'm still getting a shitload of emails from the Ultimate Warrior email exchange. This has definitely been one of the more popular articles in the past couple months, and I'm amazed by all the feedback I've been receiving. Usually I get about two emails per update, one of which detailing how it wasn't funny. I don't give a shit about negative email; I just reply with "if you don't like it, then stop reading." I mean, hell, I'm not forcing people to read free entertainment. I don't get any money if somebody reads SA, I just lose money from the bandwidth bills. If you like SA and think it's funny, that's awesome and I'm glad. But if you don't like it, please, go somewhere else. You bitching to me won't change anything, and I don't owe unhappy people anything.

What I don't understand is why all these unhappy folks, people who claim I'm not funny and only they know what real humor is, make their own website? Why don't the people who hate the forums, people who claim only they know the proper way to administer a site with 55,000+ people, start up their own forum? The whole reason I started SA back in 1999 was because there weren't hardly any good humor sites out there; there was just a ton of utter shit. Why can't they do the same thing? If you see something which doesn't entertain you enough, you're not going to get anywhere emailing the person and demanding they change to cater to you; all you can do is create something yourself which entertains you. Hell, I WISH all the folks telling me I'm not funny would create their own humor sites. The Internet needs more good comedy sites out there, and I'm all for reading more funny stuff. But don't just sit there and whine without making any difference.

Oh, and regarding feedback: we like it. We like it when you email us just saying "hey guys, good job." Every day we write articles, post them, and know over 150,000 people are reading them, and we'll maybe get feedback from two or three of them. Even though we may not reply to you, all positive feedback is enjoyed. Writing comedy on the Internet is like doing standup comedy for a brick wall. You can't hear anybody laugh, you can't see anybody laugh, and all your jokes are directed towards a cold, hard, inanimate object. Positive emails are the only way to bypass this wall for us writers, so please, if you enjoy something, let us know.

On a related note, do you guys want to know why I write about my dogs / pets? It's simple: those articles are the only ones I know will get me a ton of positive feedback. People seem to love the more human stories, mostly about my distinctly non-human pets. I guess it's something everybody can relate to. I enjoy getting a whole bunch of positive feedback, so I tend to write about my pets to get my "fix" of happy mail. Yeah, that's sad, but it sure beats spending 10 hours writing something and getting nothing in exchange except Christian home mortgage loan spam.

A Short History of SA

I remember sitting in my Gamespy office back in mid-1999, which I shared with Kevin "Fragmaster" Bowen and Ken "radium" Steeeumpf (Gamespy was so cheap they put three people in an office), and I would occasionally exclaim, "god, this site is something awful!" when running across something horrible on the Internet like one of the many dick mutilation pages or cartoon incest porn sites. I casually told Ken one day, "you know, I'm going to register that. www.somethingawful.com." He asked me what I was going to put on it. "I have no idea. I'll think about it later." $19.95 later and it was done.

After a few days of thinking, I decided what SA would become. A humor site which makes fun of all the utter crap on the Internet. Think about it: the Internet was sorely lacking in great original humor sites in 1999 with good content (and it still is in many ways), and it was crammed full of terrible garbage (and it still is in all ways). Hopefully I could start up a site which provided goofy humor while exposing people to the most awful crap the Internet has to offer.

I like to think that I reached this goal. Yes, we've been sidetracked many times with endless loops of awful furry shit, but SA is now exactly where I hoped it would be, doing what I always wanted it to do. The current writing crew is the best it's ever been, and Zack is definitely #2 in charge. I'm amazed at how Zack still retains his energetic zeal for writing and, to be honest, I'm quite jealous of him at times. He's just simply an amazing guy with a ton of creative energy, writing skills, and dedication. I'm lucky to have found him. Not to neglect all the other awesome writers (who I'll address on a later update), but Zack is just my #1 man for all his time, energy, and dedication he puts into the site.

Well that's all for now. I hope at least some of you found today's (and the first) Daily Dirt to be at least somewhat interesting, as kind of a "behind the scenes" look at SA. Send me an email saying what you think. If we get enough positive feedback, I'll continue doing it. If not, well, then who knows.

Regardless, thanks for reading SA and reading this. Honestly, it's the fans that keeps me going. The SA community is, by far, the absolute greatest group of people on the entire Internet. You guys are all awesome and, even though at times I may seem fed up or pissed off at you for certain goofy things, I damn well know you guys are the reason I'm still here.